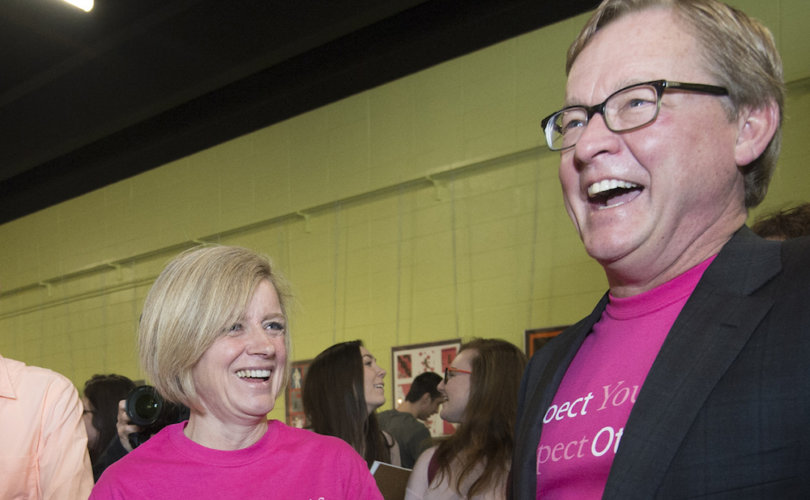 Education Minister David Eggen told reporters that Independent Baptist Christian Education Society, which operates two schools with 200 students in Spruce Grove west of Edmonton and supervises 1,200 homeschooled students, had failed to provide a plan or written assurance it would comply with a new law forcing homosexual clubs at all schools.

The minister said a third-party consultant will be appointed to examine, according to the Canadian Press, “what steps the society is taking to make all students have a safe and caring environment.”

LGBT advocates responded by urging Eggen to abandon the inquiry and remove public funding for the two schools. Others urged Eggen to sit down one-on-one with the school group’s leader, Pastor Brian Coldwell.

While Eggen cited the need to “support and stand behind all Albertans’ human rights,” defenders of independent schools said Eggen was the one violating the human rights of Christian parents.

Calling for immediate defunding was Kris Wells, the province’s leading proponent of LGBT rights in schools and an assistant professor at the University of Alberta’s Institute for Sexual Minority Studies.

“We're not sure what an inquiry would achieve,” he told the Canadian Press. “You're either complying with the law or you're not, and this pastor has clearly indicated numerous times that he has no intention of complying with the minister's directive and human rights legislation in this province. The minister should take action and institute one policy for all school boards across the province.”

He is supported by David King, a former and longtime minister of education who told LifeSiteNews that the government is within its rights removing funding from schools that do not follow its education policy.

King is also an advocate for the disestablishment of the province’s Catholic school boards, which are entirely funded by taxpayers and were instituted by the same federal legislation that created the province of Alberta in 1905. The province’s independent schools, both secular and religious, got partial public funding in the 1970s, by provincial law.

The province’s Liberal opposition leader David Swann has also called for defunding or removal of school boards that refused to apply Bill 10, the law that requires gay-straight alliance clubs or the ministry’s anti-bullying guidelines.

A group called Public Interest Alberta assessed four of the province’s schools and flunked the St. Alberta Catholic school board for failing to measure up in terms of gay- straight alliances and other measures to accommodate LGBT students.

The Independent Baptist schools would certainly have failed too had they submitted to the organization’s scrutiny. Board chairman Brian Coldwell has made it clear that neither gay-straight alliances nor “polygender” washrooms will see the light of day at his group’s two schools.

Coldwell told LifeSiteNews earlier in September that defunding “would be a mistake, but I wouldn’t put anything past this government. This is about ideology for them. They won’t be satisfied until they have gay-straight alliances and the rainbow ideology in every Christian school.” At that time, Coldwell said Christian  parents had a right to their own schools and the same funding any other schools receive.

Now, however, Coldwell says the matter is in litigation and won’t comment further. His case has been taken up by the Calgary-based Justice Centre for Constitutional Freedoms, which has issued a letter to the government, presumably making the constitutional case for the religious rights of parents to schools.

Making that argument publicly was Mark Penninga, executive director of Association for Reformed Political Action. In an Edmonton Journal op-ed piece, he asserted that Canada’s Charter of Rights and Freedoms protects individuals from government actions like Eggen’s attempt “to impose his radical ideology on every school in the province.”

But the Charter does not cover relations between individuals, he continued, such as those between private groups of parents who form their own schools and individual LGBT students who demand homosexual clubs or access to washrooms of the opposite sex.

“Eggen does not have the authority,” Penninga said, “to use the strong arm of the state, including the arbitrary slashing of funding,” to require Christian schools to violate their principles.

Making the same argument was Theresa Ng of Informed Parents, a former public school teacher who argued the funds belong to parents in the first place, not the government, and ought to reflect the diversity of parents and Albertans in general.

“To suggest that only some educational choices are ‘valid’ to receive public taxpayer funding demonstrates a shockingly discriminatory premise,” she wrote, “which declares that the needs and values of some people are worthy of inclusion in our publicly funded education system – and others are not.

“This alarming premise undermines and fundamentally corrupts the functioning of a pluralistic, multicultural and free, democratic society,” she added.

Others urged that Eggen sit down with Coldwell, as the latter has requested for months. Adriana LaGrange, president of the Alberta Catholic School Trustees Association, told LifeSiteNews, “I feel the biggest thing they could do to resolve this is sit down together and have a conversation.”

Jason Kenney, the former federal minister of multiculturalism, also urged the two men to sit down face to face. Kenney, who is campaigning for the leadership of the Alberta Progressive Conservative party, faulted Eggen for arguing his case in the media instead of settling it in private. “I’m just suggesting that the minister and his officials should not seek conflict in the media,” Kenney told reporters. “If they have a concern or issue with individual schools, they should discretely and with respect and civility sit down and try to find a solution.”

Several Catholic boards, such as Edmonton’s and Calgary’s, have permitted diversity clubs. Edmonton Catholic chairwoman Marilyn Bergstra told LifeSite that transgender students will be allowed into the washrooms of their choice and that if students wanted gay-straight alliances they would be permitted to form them.

However, LaGrange added that all such clubs would be supervised by adults and that the Catholic schools preferred to deal with the bullying issue and minorities on an individual basis rather than a group basis. “I am confident,” she told LifeSiteNews, “that the ‘Safe and Caring School’ policy in place in all our schools are in keeping with law and are honoring our Catholic faith.”