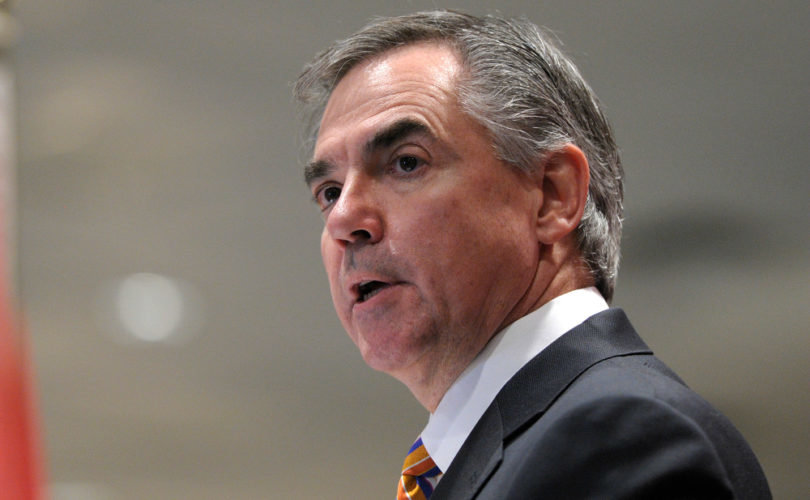 CALGARY, Alberta, April 27, 2015 (LifeSiteNews.com) –The Alberta government is on a collision course with the Charter of Rights and Freedoms over its Bill 10, which will require all schools, including Christian ones, to set up “gay-straight alliance” clubs.

According to religious and conscience rights champion John Carpay, writing in the National Post, “Some Christian schools have already informed [Education Minister] Gordon Dirks that they will not allow clubs or activities that undermine the school’s religious character.”

Carpay, who is founder and director of the Calgary-based Justice Centre for Constitutional Freedoms, predicted that unless Bill 10 is amended to allow religious schools leeway, a court would follow the precedent set by the recent Supreme Court of Canada decision in the Loyola school case “and likely conclude that Bill 10 undermines the liberty of families which send their children to religious schools.”

Loyola is a Montreal private Catholic school that refused to teach the Quebec government’s “ethics and religious culture” course because it was grounded in a secular, relativistic perspective. Like Alberta’s gay straight alliance clubs, which all schools, private, religious or public, must allow, the Quebec course’s goal is teach respect for diversity in general, and in Alberta’s case, specifically to reduce bullying of sexual minorities.

But the Supreme Court found that the Charter guarantee of religious freedom supported Loyola High School. So long as it taught about religions of the world and different ethical systems neutrally, it could teach Catholicism from a Catholic perspective (i.e., it could teach that it was the truth). It was not required to teach that all religions are equally true.

Carpay says that just like Quebec’s ERC course, Alberta’s “GSAs are ideological…, embracing a wide range of sexual expression that is incompatible with the morality of many faiths, including most denominations of Christianity, Islam and Judaism.”

Carpay noted that existing GSAs make clear on their websites that their goal is to cure the evils of “homophobia” and “heterosexism.” They denounce opponents of same-sex “marriage” as “fascists.” And, yet, as he told LifeSiteNews later, these terms are merely attempts to demonize and misrepresent what are all long-held teachings of Christianity and other faiths, which teach neither hatred nor fear of homosexuals.

None of Alberta’s political parties with sitting members in the last legislature supports Carpay’s view. All, even the right-leaning Wildrose Party, back the GSAs. There are sceptics on the web too. Someone calling himself CanadianSkeezix offered this response to Carpay: “Wow. This legal analysis is nonsense. There is a big difference between the SCC's ruling in Loyola (religious schools are not required to teach their own religion from a secular, objective perspective) versus a law which upholds the rights of citizens to free expression and association.”

But CanadianSkeezix misstates Loyola, which is not a defence of the rights of a school, but rather of the religious rights of the parents who start it and pay for it, Carpay told LifeSiteNews.

University of Victoria law professor Mary Anne Waldron, who is also the university’s vice president for faculty relations and author of Free to Believe: Rethinking Freedom of Conscience and Religion in Canada (University of Toronto Press), cautiously endorses Carpay’s view.

“The Loyola decision could well be used to defend Christian schools in Alberta that refuse to implement Bill 10,” she told LifeSiteNews. Governments have the right to require schools to teach certain things, but the Charter of Rights and Freedoms guarantee of freedom of conscience and religion does put limits on that right. “Loyola does establish that religious schools have a degree of flexibility in how they achieve government objectives,” said Waldron.

While no one questions that combating bullying is a legitimate goal for schools, said Waldron, the key issue is, “does fighting bullying in schools require GSAs?” The generic test for infringing on a constitutional right such as freedom of religion is one of proportionality. “Are they swatting a fly with a sledgehammer or with a flyswatter?” Waldron asks. “If the schools can show that alternative programs address the problem of bullying effectively, then they would have a good argument under the Charter for being allowed to pursue them.”