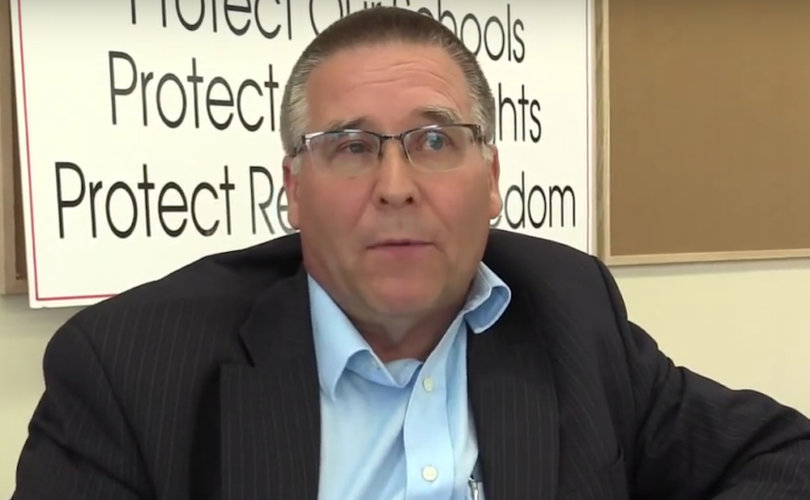 These measures are part of the New Democratic government’s anti-bullying policies that single out sexual minorities for protection, though surveys indicate that physical appearance and grades are far more likely causes of school bullying.

Last month, Spruce Grove Baptist pastor Brian Coldwell, who is also chairman of an independent Christian school board with two small schools with 200 students, said neither cross-gendered washrooms nor gay straight alliances would be allowed in his schools.

Asked about Coldwell’s comments at a school opening where he was joined by Premier Rachel Notley, Eggen said, “It’s not acceptable, not just for the kids that are attending those schools, but it sends a negative message across the province, that I’m quite concerned about as well.” According to the Edmonton Journal, Eggen also said he “won’t rule out” defunding Coldwell’s schools.

“We’ve moved so far in the last few years in regards to a sense of equality and justice and looking after our most vulnerable students. I don’t want that to be jeopardized,” Eggen said, adding he would soon announce his response to Coldwell.

All 61 public and Catholic school boards as well as independent schools have provided their responses to the government’s anti-bullying guidelines, but Coldwell told LifeSiteNews that he knew of at least 10 that planned to reject gay straight alliance clubs and poly-gender washrooms.

“We’ve asked Minister Eggen to sit down with us for over a year,” Coldwell told LifeSiteNews. “And we’ve asked again after we sent him our anti-bullying policy in March. But even though he refuses to sit down with us personally, he’s willing to make threats like this to reporters. That’s just not good management.”

Coldwell added that his boards’ two schools had received a “95 percent approval rating in terms of whether we provide ‘safe and caring’ learning environments, and that’s according to surveys by Alberta Education of our students and parents, which is a lot higher than the public schools scored.”

Like many private schools in Alberta, Coldwell’s schools receive 70 percent of their funding from the taxpayers, and in return they employ certified teachers and meet the government’s curriculum goals. But some private school operators chose to do neither and get no public funds.

Asked if he thought Eggen would be within his rights to defund Coldwell’s schools, the latter responded, “That would be a mistake, but I wouldn’t put anything past this government. This is about ideology for them. They won’t be satisfied until they have gay straight alliances and the rainbow ideology in every Christian school.”

Former Education Minister David King told LifeSiteNews that defunding independent schools that rejected Eggen's anti-bullying policy was a reasonable response. “It is not in the public interest” to have tax-supported schools deviating from policy. “This does not shut private schools,” he noted, but merely requires parents to pay for them out of their own pocket.

The anti-bullying policy has also put the government at odds with Alberta’s Catholic school boards, which unlike the Coldwell’s private schools, are embedded in the constitution of Alberta. But King maintains they are not deeply embedded. “The Newfoundland and Quebec legislatures have both voted to remove denomination schools from their constitution, and the federal government allowed it.”

Because Alberta’s constitution was established by a simple act of the federal Parliament, all it would take to remove its Catholic schools, King said, would be an amendment passed by the same Parliament upon the request of the provincial legislature.

Neither Brian Jean, the leader of the Wild Rose Party, nor Jason Kenney, the only announced candidate for the Progressive Conservative Party leadership, responded to LifeSiteNews’ request for comment.

Adriana LaGrange, the president of the Alberta Catholic School Trustees Association, would not comment on the fate of Coldwell’s schools but said all Catholic boards in the province had submitted their anti-bullying plans “and I’ve been assured by legal counsel they comply with the law.”

LaGrange indicted that Catholic schools would permit student anti-bullying clubs, which would have adult participation to ensure “a pastoral approach” to the issue of homosexuality. Many boards were dealing with the bathroom issue by establishing gender-neutral washrooms to be used by one student at a time.

Like Coldwell’s schools, the province’s Catholic schools score above average on Alberta Education’s measure of “safe and caring” environments.