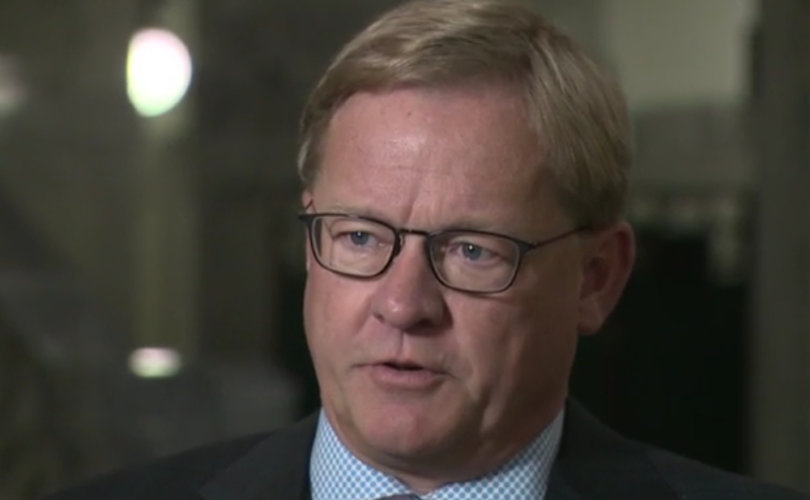 But the school’s lawyer, John Carpay of the Justice Centre for Constitutional Freedom, told LifeSiteNews, “The order is nonsensical. The order is to comply with the law and the schools are already in compliance.”

Education Minister David Eggen issued the order Thursday, following the advice in a report he considered for several months before publishing.

The order requires the Independent Baptist Education Society, operator of two schools on the western outskirts of Edmonton with a few hundred day students and a thousand-plus affiliated homeschoolers, to permit a homosexual club, or “Gay Straight Alliance,” upon the request of students.

The order noted in its preamble that the society’s chairman, the Rev. Brian Coldwell, last year informed Eggen that the schools will not set up such clubs because they violated the schools' and parents' Christian principles. Coldwell also made his stand public.

Carpay acknowledged that The School Act does require setting up Gay Straight Alliance clubs upon request. “But no students have ever requested such clubs (at the two schools). So the schools are in full compliance with the School Act.”

Moreover, Carpay said, “These schools’ policies are no different from the policies at many Catholic and independent schools in Alberta.”

Last year, Eggen ordered every school board in the province to provide a report on how they would comply with the requirement for Gay Straight Alliance clubs that was inserted in the School Act by Bill 10 in 2015. Carpay told LifeSiteNews that many independent and Catholic schools also reported to Eggen “they would not allow clubs to operate which were not in compliance with their religious beliefs.”

Eggen, he said, has not responded to any of those reports.

Why then did Carpay think Eggen issued the order to the Independent Baptist schools?

“The minister is responding to media comments” made by Coldwell and “is very interested in looking good to certain groups.”

A report provided to Eggen by Edmonton lawyer Dan Scott called for the independent Christian schools to provide Gay Straight Alliance clubs. He recommended that Eggen appoint a trustee to run dissenting schools or at least their homosexual clubs and, if they resisted, he should revoke their accreditation.

“The Society’s official position on marriage … is hostile at least to LGBTQ persons,” Scott wrote. One of the schools, he said, “cannot objectively be considered ‘welcoming’ to LGBTQ students” because of what its students and their parents were “potentially learning” at the affiliated New Testament Baptist Church. Moreover, the society’s statement of faith is “not remotely welcoming or respectful of persons who identify as LGBTQ.”

However, Scott admitted that he found school officials “did seem sincere in their view that every student regardless of background or personal characteristics is entitled to love, compassion.”

Moreover, he conceded that “in 2014 and 2105, Alberta Education commended Meadows and Harvest for having created ‘school environments that are welcoming, safe and respectful of others.” He also reported the school’s insistence that no student had ever applied for permission to set up a Gay Straight Alliance nor had an LGBTQ student ever attended to the staff’s knowledge. Scott expressed the belief that, statistically, it was likely that an LGBTQ student had, in fact, attended.

Both Scott in his letter and Eggen in the preamble to the order report that the Independent Baptist society based its resistance to Gay Straight Alliance clubs on the Charter of Rights and Freedoms’ protection of religious freedom. Neither, however, acknowledges that right.

Eggen is a minister in Alberta’s first New Democratic government. The province’s permissive and Christian-friendly school policies go back to its foundation in 1905. Under Alberta’s founding document, both Catholic and Protestant school districts could be set up where numbers were sufficient.

In the 1980s, Alberta began offering partial funding to independent schools, most of which were conservative Christian. Later, public school boards began allowing “charter” schools to operate under their umbrella with their own boards and philosophies. They invited existing independent schools to join on the same basis. In one brief instance, the long-private Calgary Jewish School operated happily under Calgary’s Catholic School Board.

However, one of the strongest bulwarks of the New Democratic Party has long been the Alberta Teachers Association. The ATA is a fervent opponent of independent schools and a strong proponent of the LGBTQ agenda.