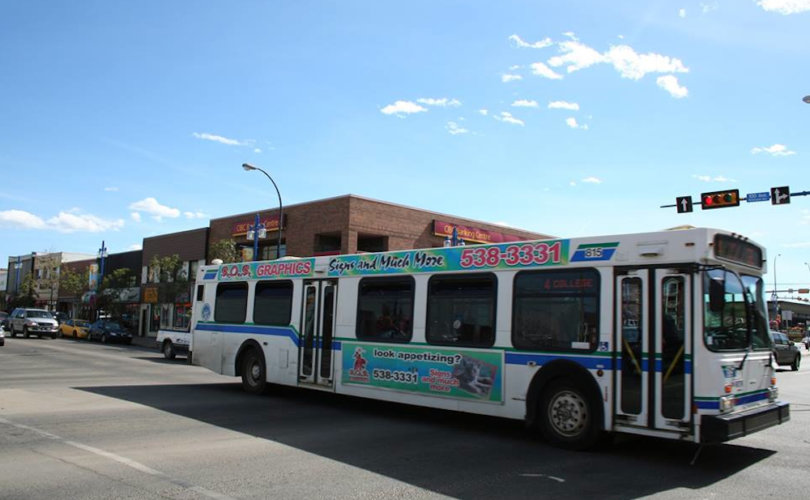 GRANDE PRAIRIE, Alberta (LifeSiteNews) – The City of Grande Prairie was “proportionate and reasonable” in banning a pro-life banner from the sides of its buses because they were “likely to cause psychological harm to women who have had an abortion,” an Alberta judge ruled.

According to Justice C.S. Anderson, the northern Alberta city “reasonably” balanced the free speech rights of the advertiser, the Calgary-based Canadian Centre for Bioethical Reform, with the city’s own policy of providing a “safe and welcoming” space for bus passengers and passersby with its advertising.

But Carol Crosson, legal counsel for the CCBR, told LifeSiteNews, “If government can tell its citizens what’s upsetting and what isn’t upsetting in their speech, then democracy is threatened and, indeed, progress is threatened.”

Not every pro-life ad would be banned, noted the judge, to buttress her finding that the city was being “reasonable” in its suppression of free speech. But the city was justified in banning the ad in question because it was reasonable to believe it would upset women and children.

The ad showed unborn babies at seven weeks’ and 16 weeks’ gestation followed by an empty circular frame filled in red to represent an aborted baby. Beneath these images were the captions: “growing,” “growing” and “gone.” Beside the images, the ad read: “Abortion kills children” and provides CCBR’s web address.

Commented the judge, “These are strong statements that vilify women who have chosen, for their own reasons, to have an abortion; they are not merely informative and educational.”

Anderson accepts the city’s remise that bus passengers and even drivers and passengers of other vehicles are a “captive audience” who cannot help but see and read the ads. By comparison, reasoned the judge, one confronted in a park or a newspaper with disturbing opinions can walk away or look away (disregarding the fact that the ads were outside the buses where people not only were free to ignore them but actually obliged to do so by the demands of traffic safety.)

Anderson also finds in previous rulings by the Supreme Court of Canada the idea that the “Charter guarantee of freedom of expression is meant to protect not only those who wish to express themselves but also those who are the recipients of the expression.”

John Carpay of the Justice Centre for Constitutional Freedoms based in Calgary told LifeSiteNews that a previous but regrettable ruling by the Supreme Court of Canada in another bus advertising case makes Anderson’s judgment “unsurprising.”

Carpay called the SCC’s 2009 ruling on Greater Vancouver Transportation Authority v. Canadian Federation of Students completely “ambiguous” because on the one hand it declared that advertising on public buses was protected by the Charter of Rights and Freedoms’ free speech provision, and on the other it said bus operators could limit free speech to make the buses “safe and welcoming.”

“You might as well not have free speech at all,” Carpay said. “Free speech doesn’t mean anything if it doesn’t mean the right to say things that are offensive and outrageous. If it just means you can spout platitudes acceptable to the majority, it is worth nothing.”

Carpay took some consolation in the protection the ruling seemed to extend to free speech on sidewalks, and parks and squares in front of city halls and parliaments. He noted that in the United States “governments bear a much higher burden for justifying infringements on free speech than in Canada.”

Crosson said the Grande Prairie decision “flies in the face of all previous jurisprudence on free speech,” including the Supreme Court’s Greater Vancouver decision. “Free speech is for the message that upsets people,” Crosson said. “Courts use language such as ‘caustic,’ and ‘vitriolic’ to describe the speech that needs protection.”

Crosson said CCBR “was looking at an appeal.”