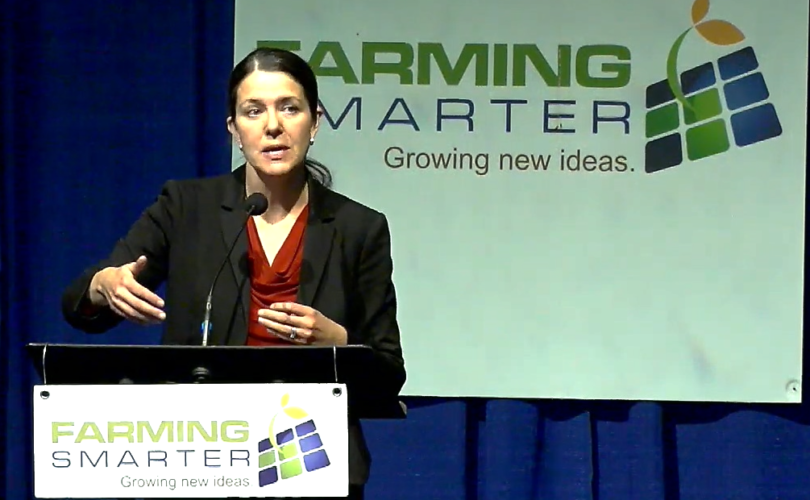 HIGH RIVER, Alberta (LifeSiteNews) – Danielle Smith, a former Alberta MLA running for leadership of the United Conservative Party of Alberta (UCP), says that if becomes premier her province would not enforce any federal “vaccine mandates.”

“Mr. @JustinTrudeau has signaled vaccine mandates are on their way, as predicted. Not under my watch,” Smith wrote Tuesday on Twitter.

“As Premier, Alberta will not enforce federal vaccine mandates.”

Smith’s comments came after a recent announcement by Canadian Health Minister Jean-Yves Duclos, who said COVID jabs will be required every “nine months.”

Smith had earlier said that as premier there will “never” again be lockdowns, and people’s conscience rights would be protected by law.

She also promised that if “Ottawa tries to impose mandatory vaccination again in the fall, we will say no.”

On Tuesday, Smith invited some of her fellow leadership candidates for Alberta premier to join her in “passing the Alberta Sovereignty Act to enforce our provincial health care jurisdiction & ensure personal medical freedom.”

Toews said the idea of an Alberta Sovereignty Act would be a “disaster.” However, he did say that “enough is enough” when speaking about the Trudeau government saying two doses of the COVID jab are not enough.

Jean, whom served as the former leader of the Wildrose Party of Alberta before it joined with the UCP, wrote on July 4, a day before Smith called him out, that Duclos is “moving the goal posts, even as he admits the vaccines don’t work well for the current Omicron variants.”

“This feels like a deliberate effort to keep dividing Canadians and play politics with a disease which has evolved to be endemic and milder,” he added.

As for Loewen, he tweeted today that as premier he would take “action” to ensure “vaccine passports will not, and cannot return.”

He also said that he would amend the Public Health Act to in effect ban mandatory vaccination.

Current Alberta Premier Jason Kenney in May announced his intention to resign as UCP leader as soon as the party elects a replacement. This came after he only narrowly passed a confidence vote from party members, no doubt due to his track record of locking down Alberta hard during the COVID-19 pandemic.

After Kenney’s announcement, many have jumped into the leadership race for the UCP, including a handful of current MLAs.

From 2009 to 2014, Smith served as the leader of the Wildrose which for a time was the official opposition party in Alberta.

In 2014, Smith and eight other Wildrose MLAs crossed the floor to join with the ruling Progressive Conservative Party under then-Premier Jim Prentice.