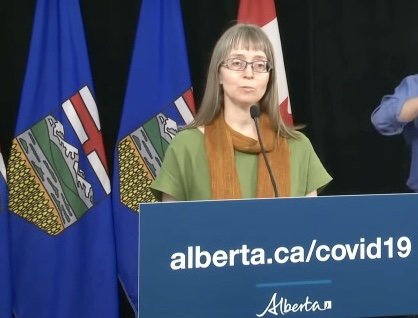 (LifeSiteNews) – Alberta Chief Medical Officer Dr. Deena Hinshaw was forced to apologize Thursday for incorrectly saying a 14-year-old died of COVID when in fact he passed as a result of terminal stage four brain cancer.

“I first want to apologize to the family of the 14-year-old whose death I spoke about on Tuesday,” Hinshaw said Thursday.

“The pain of losing a child is terrible enough without having that loss compounded by a public debate about circumstances.”

Alberta will no longer report deaths of those with COVID under age 18 until a “review” can be completed.

The backtrack by Hinshaw came after Simone Spitzer, the sister of the 14-year-old boy, in a Facebook post Tuesday blasted government officials and the media for wrongly labeling his death from COVID.

The boy was already in palliative care fighting brain cancer and had only tested positive for the virus a few days before his death, Spitzer said.

“The 14-year-old on the article is my brother. He died from stage 4 brain cancer, not from covid,” Spitzer wrote.

“This is fake news. He was diagnosed in January 2021 and hospitalized in August. Two days before his death, he was tested for covid and it turned out positive … please share and comment that this is fake.”

This past Tuesday in a regular COVID update, Hinshaw mentioned the death of a 14-year-old boy in her messaging. The boy’s death was wrongly stated to be the youngest to date attributed to COVID in Alberta.

Despite Hinshaw saying the boy had “complex health considerations,” the fact she singled out his death, which was one of 33 reported having occurred over the weekend, did not sit well with Spitzer.

A GoFundMe page was set up by the Spitzer family a week ago documenting their son Nathanael’s battle with brain cancer.

It reads that at the start of 2021 “Nati (Nathanael) was diagnosed with a stage 4 brain tumour. After 9 months full of ups and downs, on October 7th Nathanael passed away at the age of 14.”

“Nati was quite the entertainer, always quick with a smile, fast with a joke and will be deeply missed by his family and friends. We, the siblings of Nathanael would like to assist our parents with the cost of the funeral and the financial toll this had on them and are asking for your support.”

The page has since stopped taking funds as the total amount needed for funeral costs had been reached.

In a Facebook message posted Thursday, Spitzer blasted the politicization of her brother’s death by Rachel Notley, the former Premier of Alberta and leader of the socialist NDP party.

On Tuesday, Notley took to Twitter to write, “A child has died of COVID-19. They were just 14. Telling their loved ones that there were other health complications that contributed to their death offers no comfort whatsoever.”

Notley also retweeted various messages from some of her MLAs regarding the boy’s death.

Spitzer did not take kindly to this.

“Instead of providing more information on the cause of death, Rachel Notley only wants to put focus on covid to spread more fear. Completely disregarding the fact that cancer caused my brother’s death!” wrote Spitzer, with a link to a Western Standard report about her brother’s death.

Today, Notley apologized for the earlier Twitter comments about Nathanael and said they have now been deleted.

Throughout the past year and a half, Notley has made it a point to take to social media to highlight every COVID death mentioned by health officials.

This comes even though thousands more have died from natural causes, accidents, overdose, and suicides than the official COVID death count, which at of the time of this writing stands at 2,930.