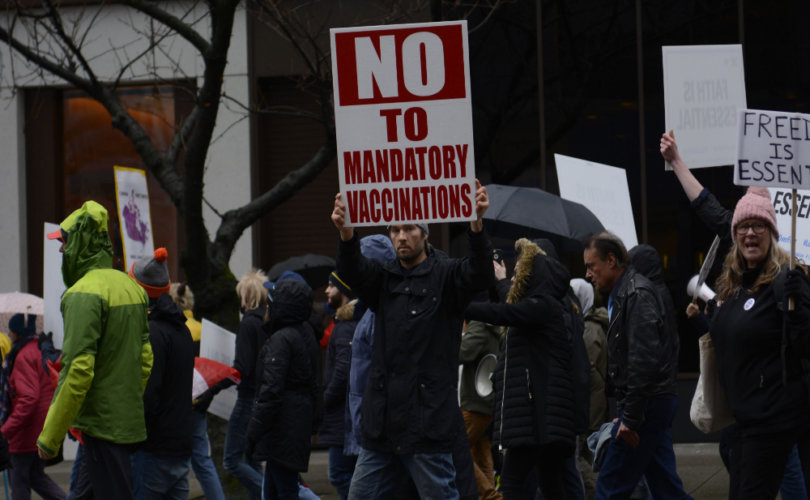 EDMONTON, Alberta (LifeSiteNews) – The Canadian province of Alberta has officially rescinded a COVID jab mandate for its healthcare workers as a condition of employment, which when introduced last year forced many doctors, nurses and others in the field off the job.

In a news release yesterday, Alberta Health Services (AHS) said “healthcare workers will no longer be required to be immunized for COVID-19 as a condition of employment.”

“In addition, our new hires and students will no longer be required to be immunized for COVID-19 upon hire or placement,” it added.

Doctors who fought the mandates said the news of them being gone is welcome, but that they should never have been implemented in the first place.

“While we’re happy with AHS’ eventual decision to rescind mandatory vaccines for health care workers, it is late, and truly should never have happened in the first place. Much damage has already been done,” Dr. Chris Gordillo told LifeSiteNews.

Gordillo noted that although “what’s done is done,” but there is something everyone “can learn from this.”

“We would hope this decision translates to (lifting COVID mandates in) all other fields of employment Canada-wide,” Gordillo told LifeSiteNews.

Gordillo, who practices family medicine near Edmonton, was part of a large group of Alberta healthcare workers who spoke out against the COVID jab mandates when they were first announced last year.

He was one of the doctors who led the charge in opposing the policy. He said last year that he saw “many people injured by vaccines,” and that COVID jab mandates are a form of “tyranny.”

AHS’s “Immunization of Workers for COVID-19 Policy” was relaxed in March to allow current workers to not show their COVID jab status. However, the policy still mandated that new hires be jabbed.

According to AHS, the decision to “rescind” the policy is the result of “emerging evidence that the immunization required by the policy, which is one dose of an approved one-dose vaccine or two doses of an approved two-dose vaccine, has become less protective against infection.”

“The COVID-19 vaccines available to date target the original strain of the virus and the virus has evolved since then,” AHS said.

Despite dropping the jab mandate, AHS is still pushing the jabs, with its interim president and CEO saying, “We continue to recommend COVID-19 immunization, including all booster doses available, to all of our healthcare workers as part of our overall approach to protect patients and one another.”

AHS claims that it implemented its COVID jab policy to “protect patients, healthcare workers and the public at a time during the pandemic when the immunization required by the policy was still effective in preventing transmission and when it was needed most to help contain the spread of COVID-19.”

“This was the right policy at the time, and was based on the best evidence available to protect our staff and patients.”

AHS then said that “Policies and procedures have had to constantly evolve during the pandemic” to “reflect significant changes in the virus itself and the ever-changing evidence base as we continue to protect our people and patients.”

Under Alberta Premier Jason Kenney’s watch, AHS mandated that all its workers be “fully vaccinated” with the COVID shots by November 30, 2021, with the order taking effect on December 13. The mandate impacted thousands of doctors, nurses, and other healthcare workers, including those contracted. Many quit their jobs, and others went on leave.

Despite the dropping of the AHS COVID jab mandate, there have been recent setbacks.

In a decision that lawyers blasted as an affront to freedoms, an Alberta Court of Queen’s Bench judge ruled last week, that one’s constitutional rights do not apply to persons seeking organ transplants.

Doctor: There is ‘real’ harm caused by the jabs, both physical and mental

In speaking with LifeSiteNews regarding AHS’s latest announcement, Gordillo said that there “have been real physical injuries from vaccine side effects” along with “real socioeconomic and mental health impacts, on people not consenting to the vaccine.”

“Also, those who had no real choice, and reluctantly caved in, no jab, no job,” Gordillo told LifeSiteNews.

“There has been a real deterioration in trust, of employers, unions, and other authorities. Worst of all was the violation of informed consent (decisions must not be coerced) as well as suppression of medical and religious freedoms (personal rights to choose).  If a nation or province allows suppression of these freedoms for an individual, can it truly be considered free.”

In 2021, Kenney promised he would never implement a vaccine passport in Alberta. However, in late 2021, he went back on his word and implemented a discriminatory vaccine passport program that banned the vaccine free from eating out, going to the movies or to theater, sports events, or recreation centers.

COVID jab mandates for public sector workers were enacted, and then later rescinded by many cities in Alberta, including both Calgary and Edmonton.

Doctor: COVID jabs should not be pushed on kids

Gordillo told LifeSiteNews that considering AHS’s recent decision, he and other like-minded doctors hope “there is less push to vaccinate children, as vaccine efficacy is questionable.”

“Children are not at significant risk of serious harm from the Omicron variant,” Gordillo told LifeSiteNews.

“Finally, we would hope there is a movement towards safeguarding against future violation of basic human rights.”

Also, for a while now, experts have been sounding the alarm over what can be described as a flood of COVID vaccine injury reports.