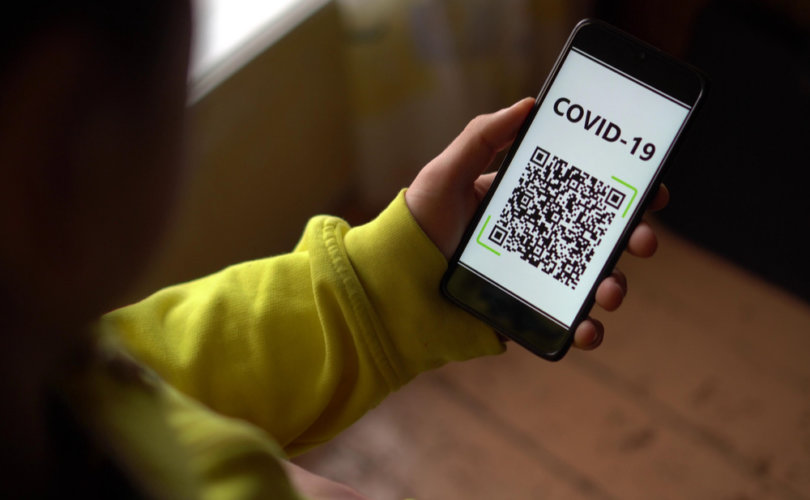 AIRDRIE, Alberta (LifeSiteNews) – An Alberta MLA blasted his government for creating “divisions” after it announced a new scannable QR code was in the works to prove one’s COVID-19 status.

“During last week’s announcement, it was also revealed to me that the province will be introducing a QR Code for Albertans to use as proof of vaccination for organizations choosing to introduce a so-called ‘vaccine passport.’ Such a move suggests that the government’s position on this practice is shifting,” wrote Airdrie-Cochrane United Conservative Party (UCP) MLA Peter Guthrie in a letter sent to his constituents on Wednesday.

“Various public opinions exist on the use of vaccine passports, but I am not convinced it is a good practice for domestic use as it not only limits access to services and isolates individuals, it also provides a false sense of security for those who are vaccinated – all of which increases the divisions we unfortunately see now.”

Guthrie’s letter was written in response to an announcement made by UCP Alberta Premier Jason Kenney last Friday, when he announced new COVID restrictions and blamed the “unvaccinated” for a rise in cases.

Last Friday, Kenney also included information on the forthcoming QR code that government officials said would allow the “vaccinated” to show proof they have had their shots. It would not, however, be mandated.

Guthrie blasted Kenney for going on the attack against the “unvaccinated” as well.

“This type of communication from our leader feeds a narrative of anger and division which is unproductive in an already turbulent time. The $100 vaccine incentive has also created animosity within the constituency and I am not in favour of the negative tone adopted by leadership.”

Kenney on Friday said the “choices” of the unvaccinated are now “jeopardizing the healthcare system.”

“Because of the large group of people with no vaccine protections we have seen the Delta spread widely,” Kenney claimed.

Kenney then announced a COVID-19 vaccine incentive program. Every Albertan age 18 and over who gets a COVID-19 jab between September 3 and October 13 is eligible for a $100 prepaid debit card.

Guthrie said that although he is “vaccinated and believes vaccines,” he supports “the rights of individuals to choose for themselves, have control over their bodies, and have the right to maintain privacy in personal health matters.”

“If one believes that we should have these individual rights and we are indeed ‘in this together,’ then we should respect the decisions of our fellow constituents regardless of what those decisions may be,” Guthrie said.

“The degradation of our public health system and the inability to react to an evolving situation is the issue at hand, not accusing individuals who are unvaccinated.”

Guthrie then wrote that the “belief that being double vaccinated and possessing a vaccine passport is equivalent to immunity is not accurate because the efficacy of the vaccine wanes over time.”

“Early evidence from Israel indicates that immunity from the Pfizer vaccine declines over time which is not dissimilar to other vaccines such as those for the flu,” Guthrie wrote.

Although Kenney has said earlier that he will not introduce vaccine passports in the province, many businesses in Alberta such as the Calgary Flames and Edmonton Oilers, two teams in the National Hockey League, have announced COVID-19 jab mandates of their own for staff and spectators.

John Carpay, president of the Justice Centre for Constitutional Freedoms (JCCF), told LifeSiteNews that Kenney’s words last Friday against the “unvaccinated” are “demonizing.”

“Premier Kenney has now joined Prime Minister (Justin) Trudeau in demonizing and vilifying the unvaccinated, without a medical or scientific basis. The experimental COVID vaccines promise protection to those who receive them, but the vaccine does not stop the spread of the virus. Discrimination against the unvaccinated is fear-based bigotry, not scientific,” Carpay said.

“Israel is one of the most vaccinated countries on earth, yet it is having more COVID cases now than ever, in spite of 80 percent of its adults being vaccinated. Half of the serious COVID cases in hospital are amongst vaccinated Israelis, and lockdown restrictions are on their way back.”

Alberta’s largest two cities, Calgary and Edmonton, have both mandated jabs for all city workers.

As a result, frontline workers in Calgary stood in unison in silent protest Tuesday of the city mandate requiring all employees to get the COVID-19 jabs or lose their jobs.

On July 1, Alberta lifted virtually all COVID-19 restrictions, the first province in Canada to do so. However, the province now has a mask mandate in place along with a ban on alcohol sales in bars and restaurants after 10 p.m.

Although Kenney removed COVID-19 restrictions, his popularity has taken a blow among his conservative base for his walking back an earlier promise that Alberta would be “open for good.”

Also, harsh COVID-19 restrictions earlier in the year combined with three Alberta pastors being jailed for defying virus rules has resulted in a low level of approval for Kenney in the polls.

Health Canada has authorized four COVID-19 injections for adults and one for kids ages 12 and up (Pfizer), all with connections to cells derived from aborted babies. All four have also been associated with severe side effects such as blood clots, rashes, miscarriages, and even heart attacks in young, healthy men.

The list of FDA-recognized adverse events has grown from severe anaphylactic reactions to include fatal thrombotic events, the inflammatory heart condition myocarditis, and neurologically disabling disease like Guillain Barré Syndrome. Meanwhile, the CDC reports a COVID-19 infection survival rate of greater than 99.95% for those under age 50.

Trudeau also said recently that, if re-elected, he would create a $1 billion COVID-19 vaccine passport fund for provinces to access. Manitoba and Quebec have vaccine passports in effect. British Columbia will implement one starting September 13 and Ontario will follow on September 22.