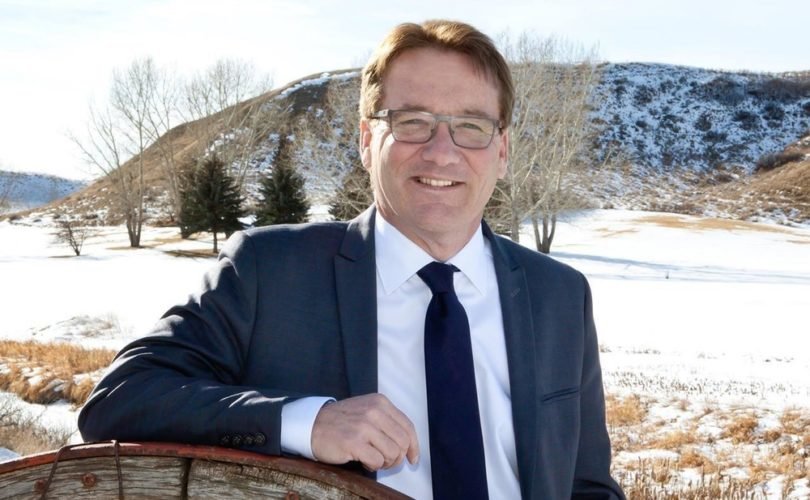 MEDICINE HAT, Alberta, March 26, 2021 (LifeSiteNews) – An outspoken provincial politician from Alberta says that it was a “mistake” for governments to not list religious practice as “essential” when locking the population down with COVID health orders.

“I think one of the things that governments, one of the mistakes that governments all around the world made at the start of this thing a year ago now, was not to define religious practice, spiritual freedom, as an essential part of our life and our way of life,” said Drew Barnes, the United Conservative Party (UCP) MLA for Medicine Hat to LifeSiteNews.

Barnes also told LifeSiteNews that many of his constituents have said loud and clear they are suffering “from COVID fatigue and information overload.”

“I think almost all of us are suffering from COVID fatigue and information overload. I've talked to many Albertans in the last little while that are looking for hope or looking for faith or looking for the opportunity to return to a normal life with their friends and their family,” said Barnes.

“And sometimes there's too much of a message. So going forward—and I think it's best not to look back going forward—let's focus on opportunity and faith in the future.”

There have been few politicians in Canada at all levels of government who have come out against COVID lockdowns to highlight the negative effects they have had on people’s mental health.

Barnes, however, has not been afraid to speak his mind and has consistently advocated for a regional approach to lockdowns, arguing that the negative effects they have caused cannot be ignored.

Only recently, a total of six UCP MLA’s including Barnes went public to show their anger over the flip-flopping of UCP Alberta Premier Jason Kenney’s backtracking on planned COVID-related restriction relaxations.

On Monday, the Alberta government said that due to rising “variant” cases of COVID, they would not be relaxing further restrictions. Barnes spoke out strongly against this, saying in a statement he believes in a regional approach, especially considering his riding only has a dozen or so active cases.

Barnes told LifeSiteNews that he has spoken to many MLAs who are in favor of a regional approach. He has also joined the End The Lockdown Caucus. Another Alberta MLA, Angela Pitt is also part of this caucus.

Liberty Coalition Canada (LCC) is behind the “End the Lockdowns National Caucus,” which is a non-partisan group of current and former elected politicians with the common aim to end all “lockdowns” in Canada.

Barnes told LifeSiteNews one of the reasons he joined the group is that he realizes and sees the unprecedented stripping of Canadians freedoms due to COVID lockdowns.

“The main goal of it is to analyze government regulations and government actions during the COVID lockdown. And let's look at that, we've had a couple of great meetings. There's more to go,” said Barnes.

Barnes riding has seen a spike in suicides since the start of the COVID crisis, mostly in middle-aged men, which he says shows the dire state of mental health in the area.

“It's incumbent on us decision-makers to get this right. It's incumbent on us to make sure that if we go into this kind of thing again, that we've learned from any mistakes that were made this time. And God bless every family and person that's been affected.”

Since the jailing of Alberta Pastor James Coates of Grace Life Church (Grace Life) in Spruce Grove, Kenney, and his UCP government have come under increased fire from many who oppose lockdowns.

Although Coates was released this past Monday after a $1,500 fine was paid “as time served,” the Kenney government recently backtracked on planned easing of restrictions on church attendance size.

About Coates, Barnes said it was an “awkward, awkward situation where we're letting criminals out of jail. But we have pastors in jail for breaking different rules.”

“You know, bless Pastor Jones and his family…these are the things that we cannot afford to get wrong in the future,” Barnes told LifeSiteNews.

Barnes told LifeSiteNews that nothing will stop him from being critical about the government’s handling of the COVID situation.

Outside of Barnes’ office, anti-lockdown protests have been held with regularity.

As for the Kenney government, the Justice Centre for Constitutional Freedoms (JCCF) is currently suing the Alberta government over passing Bill 10 last year. The Public Health Act has been criticized for “providing sweeping, extraordinary, and nearly unlimited powers to any government minister at the stroke of a pen.”