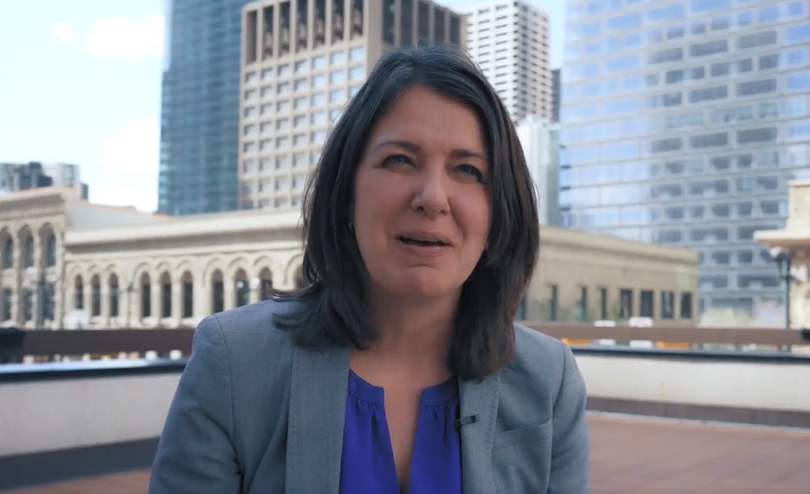 Take a deeper look yourself and see why we need to stand up for Alberta👇 #cdnpoli #abpoli #ableg #JustTransition pic.twitter.com/0IHM5tEWME

She prefaced her video by tweeting that the “Just Transition” plan “isn’t just about phasing out fossil fuels and shutting down energy economies,” but also “about radically restructuring societies.”

She then urged her followers to “Take a deeper look yourself and see why we need to stand up for Alberta.”

In the video, the narrator states that the “concept of a just transition emerged from the 2015 Paris Agreement on an international treaty on climate change, and it’s about transitioning society away from oil and gas towards a new green economy.”

“The just transition thinking has been adopted by environmental activists across the world. Why? Because it isn’t just about phasing out fossil fuels and shutting down energy economies. It’s about radically restructuring societies and redistributing wealth position,” the narrator continues.

The narrator then states that Trudeau is looking to “destroy millions of jobs and entire sectors of our economy.”

A mid-January article from Blacklock’s Reporter, which was noted in the video, revealed how the Trudeau Liberals’ “Just Transition” plan could impact and threaten the jobs of some 2.7 million Canadians.

The report noted how a Liberal memo rather brazenly said some workers could always get jobs as “janitors.”

About the possible elimination of millions of jobs, the video narrator said “These aren’t just numbers. They’re people, they’re families.”

The “Just Transition” green energy plan was announced over two weeks ago by Trudeau’s Natural Resources Minister Jonathan Wilkinson, who informed citizens the federal government will be moving ahead with what it calls “just transition” legislation.

The so-called “just transition” legislation will be designed to coerce workers in the oil and gas sector to transition into “green” jobs.

The announcement was immediately blasted by Smith and her cabinet, who called the plan reckless and warned it could devastate their province, which is heavily reliant on the oil and gas industry.

Smith will fight Trudeau’s ‘just transition’ with ‘every’ tool available

Smith has promised to use “every tool at her disposal to stop Justin Trudeau’s” attacks on Alberta’s oil and gas industry.

“We’re saying no to Justin Trudeau’s unjust transition,” she in her video.

The latest video comes after Smith’s statements from last week in which she told Trudeau to “back off” when it comes to his so-called “transition” plan.

Smith said Trudeau is playing a “dangerous game” with Alberta’s oil and gas industry, adding that “Albertans are not going to sit back and be devastated once again by yet another Trudeau.”

Alberta is not just home to the largest oil and gas reserves in Canada, but also ranks fourth in the entire world for such reserves, behind only Venezuela, Saudi Arabia and Iran, making the sector integral to the province’s economy and way of life.

While the Trudeau government claims the “science” is settled on the matter of man-made climate change, many scientists feel otherwise.

LifeSiteNews co-founder and Steve Jalsevac has written extensively on the climate change movement, stating that there is much evidence that it is “the latest and largest-ever-in-history scheme by globalist elites to impose a secularist, anti-life and anti-family New World Order with world governance and removal of all national borders.”