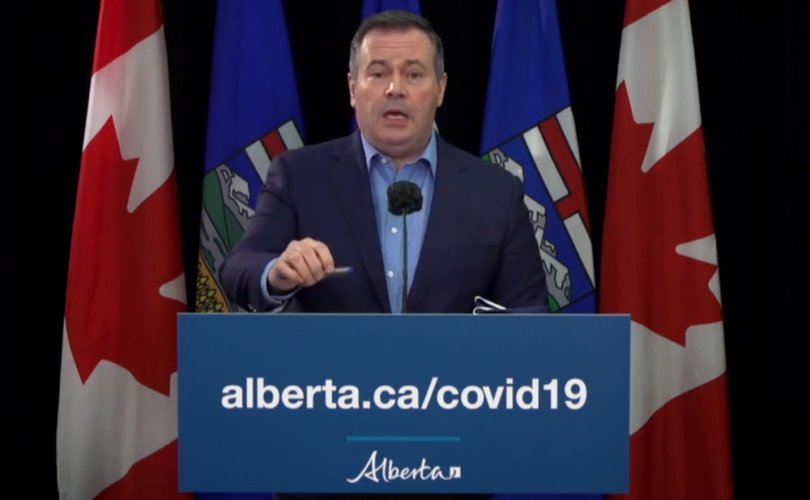 ALBERTA, Canada, February 5, 2021 (LifeSiteNews) — While Alberta Conservative premier Jason Kenney is adamant that “cold, hard numbers” of COVID-19 cases requiring hospitalization justify his province’s state-of-emergency restrictions, he has also acknowledged that the “Great Reset” cannot be written off as a “conspiracy theory,” stating clearly that such an agenda will not be influencing the province’s policies.

Kenney, leader of the province’s United Conservative Party, recently urged Albertans who maintain that COVID-19 is a hoax to look at the province’s health data to see that COVID-related hospitalizations and deaths are happening. He criticized those who hold that “any kind of public health restrictions to limit viral spread during the pandemic is somehow part of a global conspiracy.”

Alberta declared a State of Public Health Emergency to “reduce cases and protect the health care system” on November 24. So far, 1,684 Albertans out of a population of 4.4 million have succumbed to the virus, which amounts to 0.04 percent (four hundredths of one percent) of the province’s population, according to Alberta.ca. The vast majority (85 percent) of those who have died are over the age of 70 (1,424). The average age for those who have died from COVID is 82 years. No one under the age of 19 has died. The province is planning to ease restrictions beginning Feb. 8.

“This is not a conspiracy,” Kenney said during his Feb. 2 Facebook live-stream video as he displayed a graph showing the number of COVID-19 patients in the province’s hospitals. “This is not a figment of my imagination. This is not invented by Klaus Schwab.”

Klaus Schwab, founder of the World Economic Forum, wrote a book titled COVID-19: The Great Reset in which he argues that the coronavirus provides an opportunity to “reset today’s world” so as to “fix the deep-rooted ills of our societies and economies.”

“The pandemic gives us this chance: it ‘represents a rare but narrow window of opportunity to reflect, reimagine and reset our world,’” Schwab wrote in the 2020 book, quoting one of his own talks. Schwab’s World Economic Forum is known for hosting annual summits in Davos, Switzerland, convening global elites who make plans for how to order the world.

Kenney, in a December 6 Facebook live post, pointed out that Schwab’s “great reset” idea is not a conspiracy theory, adding that Schwab had even sent him a copy of the book.

“He sent me a copy. I guess he sent one to probably every government leader around the world,” he said. “And Klaus Schwab's thesis in his book is that we — governments and societies, the world — should seize the opportunity of the public health and economic crisis to reimagine the world and radically change policies.”

Kenney said he would describe Schwab's “great reset” plan as a “grab bag of left-wing ideas for less freedom and more government, for more government intervention, for policies that would, I think, create massive poverty, particularly [regarding] energy policies that he is advocating.”

“It’s a little ski village in Switzerland. And every, I think February, a couple of thousand super-rich people, a lot of billionaires, millionaires, global CEOs and politicians fly into Davos with hundreds of private airplanes. They go into Switzerland and they spend a week basically lecturing the rest of the world, especially working women and men, about how they should reduce their carbon footprint,” he said. “The hypocrisy in that crowd is so thick you can’t even cut it with a knife.”

Kenney made it clear that Schwab’s theories would not direct Alberta policy. “And so, no, I’m not going to be taking any policy direction from Klaus Schwab or his ilk.”

The premier called it “offensive” when people downplay Schwab’s idea’s as conspiracy theory, especially since there are prominent leaders in power — here he mentioned Canadian prime minister Justin Trudeau — who back the Great Reset agenda.

The great reset, Kenney said, is an “actual set of concrete proposals being advocated by some very influential people and including, apparently, by Prime Minister Trudeau, who clearly alluded to it, referred to it, quoted from it — the Schwab theory — in a speech he gave to the United Nations a couple of months ago. So it’s not a conspiracy theory to talk about that. Those are the folks advocating it.”

“And I think it’s perfectly legitimate for democratically elected leaders, for me to say, ‘Heck no, we’re not going to exploit or take advantage of a crisis to advance a political agenda,’” he added.

Kenney said that instead of “exploiting the crisis to impose on democratic societies a whole bunch of failed socialist policy ideas,” political leaders should focus on “generating economic growth, on recreating some of the trillions of dollars of wealth that will have been destroyed, on restarting some of the hundreds of thousands of businesses that will have gone under, on obsessively focusing on getting the tens of millions around the world back to work.”

“Those who have suffered most in the COVID era have been the poorest around the world. And so the notion that we would then drive them further into energy poverty through Klaus Schwab’s policy agenda is, I just frankly find it offensive.”

Kenney called it “very distasteful and regrettable” that influential people like Schwab and Trudeau would “explicitly seek to take advantage of a crisis like this to advance their own political vision and values.”

In December, Kenney promised that the province would not be building “any COVID internment camps”; that there would be “absolutely no mandatory, coercive, compelled vaccination program in Alberta”; and that there will be “no ‘vaccine passports’ in Alberta.”