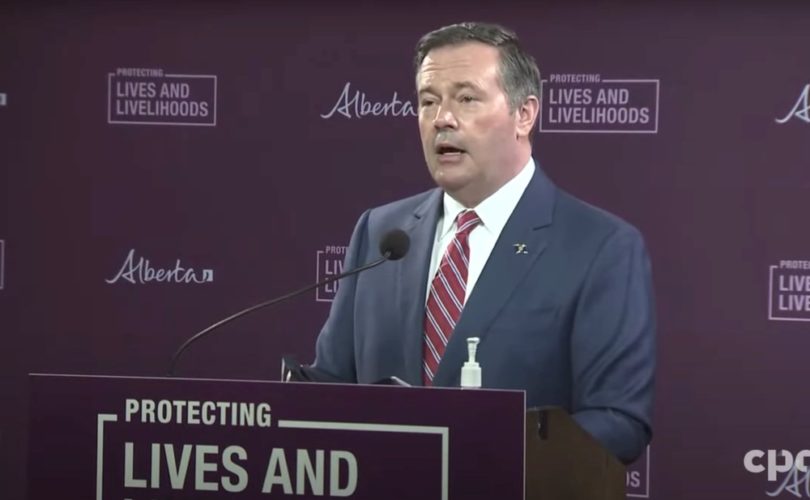 “As far as I know, Canada is the only major country in the world with a policy like that (vaccine mandate for travel), which has no defensible public health rationale. It’s political theater, not public health policy,” Kenney said in a Twitter video posted last Thursday.

“So we are renewing our call as a legislature, as a government, on the federal Liberals to drop the vaccination requirement for people to board a flight. People who are vaccinated can very easily transmit the omicron variant of COVID-19. And so, this is no longer a distinction that serves any defensible purpose.”

Kenney blasted the Alberta NDP Party, which is the official opposition in the province, for standing “in alliance with the Trudeau Liberals” in voting against a recent motion brought forward by the governing United Conservative Party (UCP) calling for an end to mandates.

For months, Kenney implemented a vaccine passport within this own province, which in effect barred the vaccine-free from many public and private places. Alberta was the first province to scrap its COVID passport in February, no doubt due to public support of the trucker Freedom Convoy.

Kenney’s policies also resulted in thousands of healthcare workers being fired because they refused to get the experiential jabs.

This is not the first time Kenney has called out the federal government of Prime Minister Justin Trudeau over its COVID mandates for travel. However, it is the strongest call he had made yet in asking for them to end.

Kenney’s public call to end the mandates come at the same time he is up for a leadership confidence vote to run the UCP, which will take place at a Special General Meeting (SGM).

Many within the UCP, including many of his caucus members, are not happy with the way Kenney governed Alberta through the COVID crisis in enacting draconian rules that unfairly targeted the vaccine-free and closed businesses.

The UCP SGM was to take place with in-person voting on April 9, but Kenney and party brass changed the vote to mail-in ballots instead, citing a surge of membership registrations as a result. Instead, the mail-in vote will take place from April 9 to May 11, with the results to be made public on May 18.

The sudden change to a mail-in vote was met with outrage from thousands of party members who plan to sue the UCP and say the changes go against party bylaws.

Despite Kenney’s calls for an end to federal COVID jab mandates, he was recently heard in a private caucus staff call calling some conservatives “lunatics” and “kooky people.”

The Trudeau government last August announced that Canadians traveling by air, rail, or sea, both domestically and internationally, must have the experimental COVID jabs or they would be barred from those means of travel. The rule went into effect in December 2021.

Canadian Minister of Transport Omar Alghabra said recently that the vaccine mandate for travel by air, rail, and boat will remain in place at least for the time being.