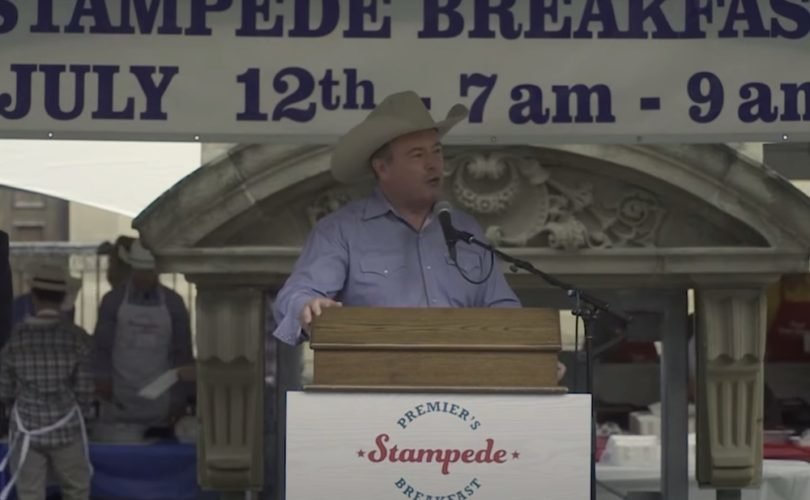 EDMONTON, Alberta (LifeSiteNews) — Alberta Premier Jason Kenney said he is cooperating with several U.S. governors who like him want to lift a requirement that all truckers crossing the border be fully vaccinated against COVID-19.

Kenney said late last week that Canada’s Prime Minister Justin Trudeau must end at once the trucker COVID jab mandate, which came into effect on January 15. The U.S. government has enacted a similar mandate that took effect on January 22.

On Monday, Kenney went a step further, admitting the trucker jab mandate has turned into a “crisis.” He said both the Canadian and American governments need to take “immediate” action to fix the crisis.

“I’m getting pictures like this from grocery stores across Alberta this morning. This is turning into a crisis. It requires immediate action by the Canadian & US governments,” tweeted Kenney Monday.

I’m getting pictures like this from grocery stores across Alberta this morning.

This is turning into a crisis. It requires immediate action by the Canadian & US governments. pic.twitter.com/nEmbSgX2BU

Kenney noted that he was “on the phone with US Governors this morning who share my concerns.”

“We are working on a joint letter to the President and the Prime Minister urging them to use common sense, end the policy that has taken thousands of trucks of the road,” said Kenney.

Many called out Kenney for saying one thing while doing another, pointing out that discriminatory vaccine passports and draconian COVID rules are still in place in Alberta.

“Jason Kenney, enforcer of vaccine passports and mandates, complains to win some cheap political points while he simultaneously holds ‘unvaccinated’ Albertans hostage. Got it,” tweeted Albertan Paul Mitchell, who ran as People’s Party of Canada (PPC) candidate in 2019.

On Tuesday, Kenney said during an interview on The Roy Green Show that Trudeau’s mandates are “making a bad situation much worse by this quarantine rule for unvaccinated truckers.”

“We’ve got seven million cases of Canadians walking around with active Omicron COVID infections right now, as we come down the omicron curve several million more Canadians will get infected,” said Kenney. “Having a few thousand unvaccinated truckers delivering critical goods to Canada, especially after they tested negative is not going to make any measurable difference in viral spread, so there’s no compelling reason to do this.”

While Kenney introduced vaccine passports in Alberta, he said he will not mandate COVID injections or any other jabs in Alberta.

Despite Kenney’s promise to not mandate COVID jabs, under his watch, all healthcare workers were forced to get COVID jabs or lose their jobs. Many workers were placed on unpaid leave or fired.

A recent legal victory by an Alberta dental student has allowed for un-jabbed healthcare workers to be allowed back to work providing they take a COVID test.

As a result, truckers in Canada have had enough and are fighting back in what is the largest protest against COVID virus rules

The “Freedom Convoy 2022” group has raised over $5.2 million in under two weeks.