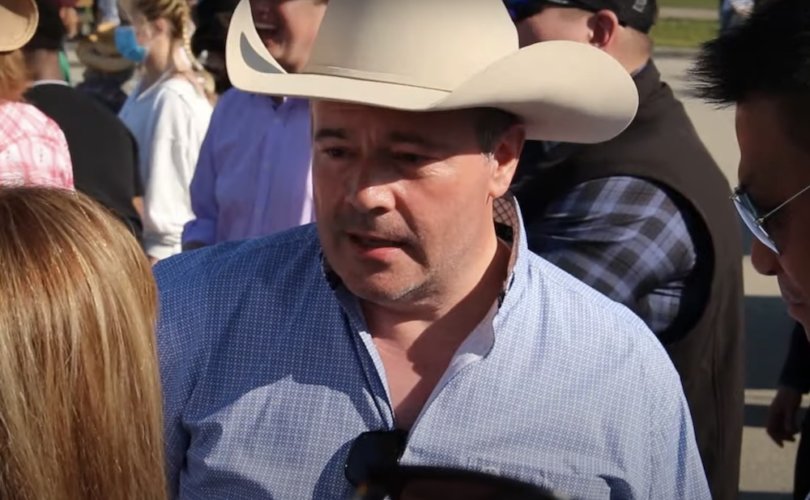 EDMONTON, Alberta (LifeSiteNews) — Despite promising his province would be open “for good,” Premier of Alberta Jason Kenney introduced a COVID-19 vaccine passport Wednesday, as well as new rules banning “unvaccinated” people from gathering in their private homes.

“The decision not to get vaccinated is not just a personal choice, it has real consequences for our whole society and the ability of our hospitals to cope,” said Kenney Wednesday while announcing new restrictions.

“That is why the government has reluctantly decided to adopt the ‘Restriction Exemption Program,’ a proof of vaccination program for participation in certain discretionary activities that have a higher risk of viral transmission.”

Kenney began his press conference by declaring a state of emergency in Alberta due to high ICU rates. As of yesterday, there were 218 people in ICU in Alberta in relation to COVID-19.

Kenney’s harsh words for the “unvaccinated” also came with a note that “no one will be compelled to get vaccinated against their wishes.”

Alberta law was recently changed under Bill 66 to remove previous powers allowing the government to force people to get a vaccine.

Under the new rules, “unvaccinated” Albertans are banned from indoor social gatherings starting Thursday. Those who have been jabbed are allowed to gather indoors, however, they are limited to a single household plus one more household, at a maximum of 10 people. Kids under 12 are exempt.

Kenney’s announcement Wednesday is a flip-flop regarding an earlier promise that he would not introduce vaccine passports in Alberta. He acknowledged this Wednesday.

“I had already committed not to introduce proof of vaccination because of concerns I had around privacy rights,” said Kenney. “But we must deal with the reality that we are facing.”

Essential services such as grocery stores, pharmacies, and hospitals are exempt from the new rules.

Under the new vaccine passport, businesses that fall under the restrictions have two options: They can either take part in the program which will require proof of vaccination or a negative rapid test result and operate as “usual,” or they must restrict their capacity size.

However, only COVID tests from a pharmacy will be allowed to be used as proof, which cost $40 each on average.

Restaurants that choose not to go along with the program are banned from having in-person dining. Churches are now limited to one-third capacity, and masks and social distancing are mandatory. Masks are also mandatory in schools for grades 4 and up.

Kenney’s announcement comes only two weeks after directly blaming the “unvaccinated” for a rise in new COVID-19 cases while introducing the first round of restrictions.

Alberta introduced a COVID-19 vaccine incentive program two weeks ago. Every Albertan aged 18 and over who gets a COVID-19 jab between September 3 and October 13 is eligible for a $100 pre-paid debit card.

Only weeks before introducing new COVID-19 restrictions in September, a secretly recorded video shows Kenney swearing “to God” that his province would be open “for good.”

“I will be in Alberta this weekend for the last stretch of the election campaign to join Albertans in their fight against this despot,” said Bernier.

A federal election will be held on September 20. Some polls have the PPC at 20 percent in Alberta.

Lawyer blasts Kenney for going on the attack against the “unvaccinated”

President of the Justice Centre for Constitutional Freedoms (JCCF) John Carpay said that by “virtue” of the Kenney government limiting the fully jabbed to “indoor social interactions of no more than ten people,” the government “acknowledges that vaccinated people are spreaders of viruses.”

“What evidence does the government rely on for its belief that unvaccinated people are worse spreaders of viruses than vaccinated people,” said Carpay in a statement sent to LifeSiteNews. “Premier Kenney has joined Prime Minister Trudeau in scapegoating, demonizing and vilifying the minority of unvaccinated individuals.”

“Premier Jason Kenney has been fearmongering for 18 months about Alberta running out of intensive care beds and staff to manage Covid patients, yet his government continues to fail to increase health care capacity,” he said. “Seventeen months after announcing the increase of ICU capacity, the government has still failed to do so, instead crippling the economy with lockdowns and by incurring tens of billions in new debt that our children and grandchildren will need to repay.”

Carpay added that Kenney “complains about the unvaccinated people in the hospital” but “ignores the fact that everyone, including vaccinated individuals, can spread the virus.”

“There have been outbreaks in heavily vaccinated countries like Israel and Iceland, and the new vaccine is not effective against the Delta variant,” added Carpay.

The province’s health authority, Alberta Health Services (AHS), announced that all staff and contractors must be fully vaccinated by October 16.

The city of Calgary has mandated jabs for all city employees. The city of Edmonton is considering mandating COVID jabs but has not done so at this time. Employees were asked to disclose jab status by September 10.

As a result, frontline workers in Calgary recently stood in unison in silent protest of the city mandate requiring all employees to get the COVID-19 jabs or lose their jobs.

Also, on Saturday a large silent protest, estimated at more than 2,000 people, took place in Calgary in support of AHS nurses, doctors, and first responders opposed to jab mandates.

Kenney called the protestors an “outrageous small minority” and threatened to bring the full extent of the law on them should they block roadways.