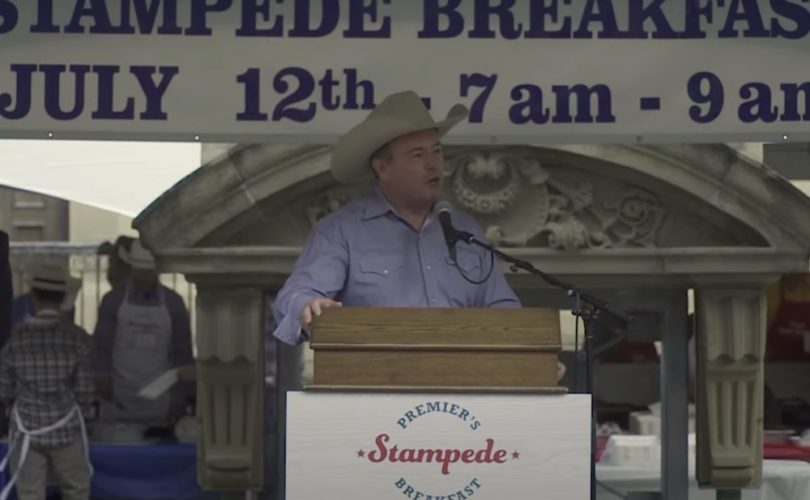 CALGARY, Alberta, July 15, 2021 (LifeSiteNews) – The Premier of the Canadian province of Alberta has said that his government will not introduce a provincial “vaccine passport” nor accept one if imposed at the federal level.

“Opposed. And we’ve been very clear from the beginning that we will not facilitate or accept vaccine passports,” said Alberta leader Jason Kenney at his annual Calgary Stampede pancake breakfast Monday.

Kenney made the comments in response to a direct question from Rebel News reporter Adam Soos about his take on vaccine passports.

“I believe they would in principle contravene the Health Information Act and also possibly the Freedom of Information and Protection of Privacy Act, we also amended the Public Health Act to remove the 110-year-old power allowing Alberta to force people to be inoculated.”

Canada’s Prime Minister Justin Trudeau said in June that in the fall the federal government will be rolling out a system of “national certification of vaccination status” that travelers can use to prove they’ve had the “full” two doses of the COVID-19 jab.

Kenney responded with a simple “yes” when asked if he would fight for Albertans should Trudeau try and mandate a national “vaccine passport.”

Despite Kenney saying he would fight a federal “vaccine passport,” recently, Trudeau’s office claimed that a “broad consensus” was reached among the nation’s premiers in working to create “a proof of vaccine credential” system for travel.

On July 1, Alberta lifted virtually all COVID-19 restrictions, being the first province in Canada to do so.

However, to lift all restrictions, the Kenney government mandated that 70 percent of the province had to have received at least one COVID-19 jab.

Kenney was faced with protestors during his annual pancake breakfast. In a video posted by the group called Calgary Freedom Central, some in the crowd at the breakfast chanted, “lock him up” with others holding signs in opposition to the Kenney government’s push to get 70 percent of Albertan’s jabbed before all restrictions were lifted.

Currently, both Manitoba and Quebec have forms of vaccine proof one can attain in digital form.

In May, the Quebec government announced that they will now send “electronic proof” in the form of a QR code to those who have had a COVID-19 jab.

Recently, the government in the province of Quebec threatened to enforce a local COVID-19 vaccine passport which would limit access to services deemed non-essential.

The government of British Columbia said in June that it is working “in concert” with federal authorities for the creation of a “vaccine passport” to be used for international travel.

In May of 2020, Kenney said he had no intention” of making a coronavirus vaccine mandatory, despite the fact that at the time a law existed in his province to allow for this.

In June, the Kenney government passed Bill 66, which repealed a long-standing vaccinations section of the province’s Public Health Act that in theory could be used to force jabs on everyone in the province.

At the time, the then head of the Justice Centre for Constitutional Freedoms (JCCF) John Carpay blasted parts of Bill 66, for giving the government dangerous new powers by entrenching the “authoritarianism of the Chief Medical Officer of Health.”

In May, JCCF lawyer Allison Kindle Pejovic told LifeSiteNews that any requirement of a “vaccine passport” to allow Canadians to travel is a “blatant” infringement of one’s personal sovereignty.

Despite removing all COVID-19 restrictions and promising to not introduce “vaccine passports” in Alberta, Kenney’s popularity has been hit amongst his conservative base.

Harsh COVID-19 restrictions earlier in the year, combined with three Alberta pastors being jailed for defying virus rules, has resulted in a low level of approval for Kenney in the polls.

The third Alberta pastor to be jailed, Tim Stephens, wrote a letter to Kenney while in prison, saying that his government’s handling of the coronavirus crisis has made his province an “embarrassment of conservative governments” the world over.

Stephens was freed on bail in early July.

In addition to Coates and Stephens, Pastor Artur Pawlowski of the Cave of Adullam church, also located in Calgary, was arrested on a highway and jailed for defying COVID-19 rules. He was released from jail after three days.