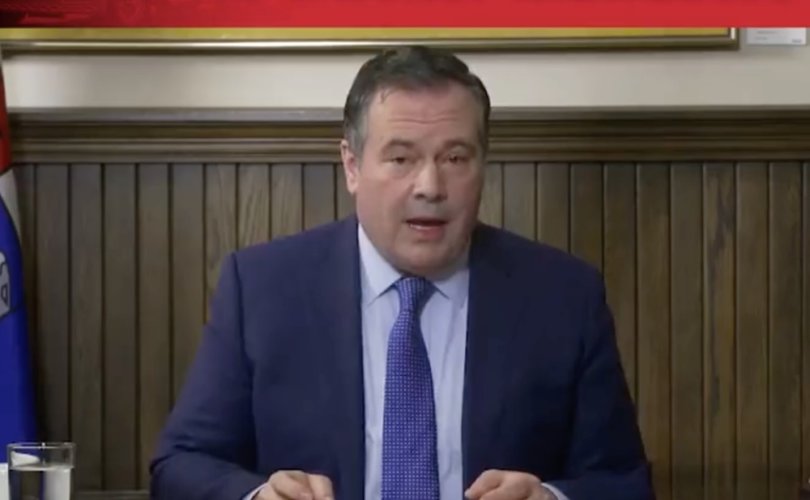 (LifeSiteNews) – During a Q&A period on Wednesday, Alberta Premier Jason Kenney once again called on Prime Minister Justin Trudeau to end the vaccine mandate for domestic plane and train travel.

“We did bring in a motion in Alberta’s legislature that the government voted for, the government MLAs, calling on the Trudeau federal Liberal government to drop the remaining travel restrictions, and particularly the vaccine passport,” Kenney answered when asked about Trudeau’s mandate that prohibits unvaccinated Canadians from boarding planes and trains.

Alberta’s conservative MLAs have called on Trudeau to scrap pointless travel restrictions, including the vaccine passport.

I don’t know any other major country in the world that has a similar policy. pic.twitter.com/lCBHYRxtQd

“We think it serves no useful health purpose. They don’t have an alternative, which is a negative test, which might be a reasonable accommodation. But in any event, I think it’s a pointless policy,” continued the premier, adding that he is not aware “of any other major country in the world that has a similar policy.”

While Kenney has condemned Trudeau’s vaccine mandate, he himself has rolled out a digital identification system in Alberta, which has drawn similar criticisms regarding individual privacy and government overreach that Trudeau’s vaccine policy has drawn.

Addressing this, prominent self-described “lover of freedom” and renowned Canadian professional hockey player Theo Fleury asked Kenney in response to his recent condemnation of Trudeau if his government is “canceling the digital ID’s as well???”

“Well said Theo, [Kenney] don’t be a hypocrite, are you cancelling the digital ID’s?” inquired another Twitter user.

With the most populous province of Ontario, the Canadian Bankers Association, and major airlines and telecommunication companies being onboard with a digital identification, in admitted partnership with and with guidance from the World Economic Forum in the case of the CBA, many are concerned that the removal of vaccine passports and other measures will have little to no effect on restoring privacy and freedom if digital IDs come into prominence.

The World Economic Forum, whose chairman Klaus Schwab has boasted that his organization has “penetrated” Prime Minister Justin Trudeau’s Cabinet, is the group behind the “Great Reset” agenda.

The Great Reset is a radical socialist plan designed by global elites that “seeks to ‘push the reset button’ on the global economy” and establish a radical New World Order that seems to closely emulate many aspects of the Chinese Social Credit System.

In fact, Schwab himself praised China and its communist leader Xi Jinping at the latest WEF meeting in Davos, Switzerland, this year, despite credible evidence that the communist regime is engaged in ethnic genocide against its Uyghur Muslim population.