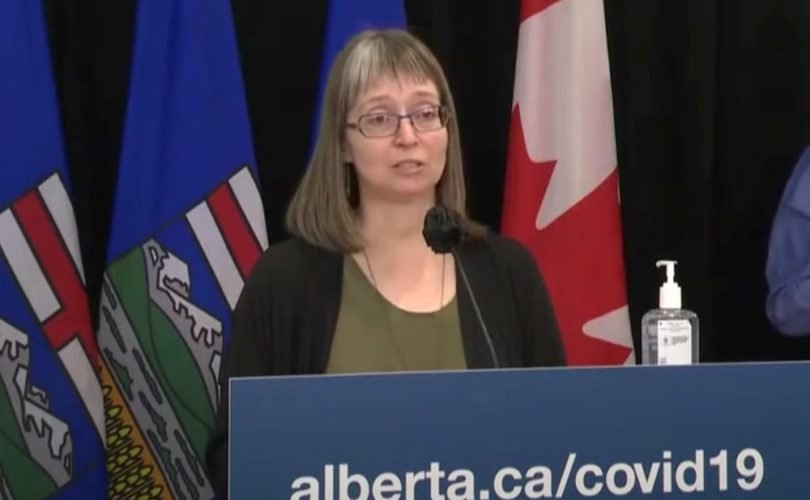 Alberta will also shut down its controversial quarantine hotels.

Alberta Chief Medical Officer of Health (CMOH) Dr. Deena Hinshaw announced on July 28 that the province would pull back from a broad swath of restrictive COVID-19 measures, saying “When we first heard of COVID-19, we knew little of the virus and we had no treatments and no vaccines. Today, we are in a very different place.”

Phase one of the pull-back began July 29, and phase two will start August 16.

“As we have always done, we need to weigh the direct impacts of COVID-19 against the indirect impacts that come from our interventions,” Hinshaw said.

As reported by Canada’s CBC News, under phase one COVID testing for asymptomatic people will no longer be advised though testing will remain available for those with symptoms. Those who do test positive for the virus will be informed and directed to self-isolate, but their close contacts will not be under quarantine orders except in specific high-risk settings.

On August 16 the changes will be more significant, including a lifting of most mandatory masking requirements and the removal of the requirement for any Albertan who tests positive for the virus to self-isolate. Alberta’s quarantine hotels will close.

The pull-back marks a shift in policy and something of a “return to normal” for Albertans.

The move to phase out the remaining public health measures came after Alberta resident Patrick King allegedly demanded scientific proof for Alberta’s COVID-19 public health policies  in a court of law.  Some believe this pushed the government to pull back on its COVID-19 mandates. Others doubt that Patrick King’s legal challenge had any impact on Alberta’s policy shift.

In an August 3 interview on the Stew Peters show, King, who works in the oil and gas industry and studied Occupational Health and Safety at the University of Alberta, encouraged viewers to “challenge the public health act in your provinces, in your states, wherever you are.”

“File a challenge against these health acts and that way the judge has no recourse… [except] to subpoena the government officials that are responsible for this,” he said.

A resident of Red Deer, Alberta, King said his legal challenge against the government began when he was fined $1,200 for a December 5 2020 rally against COVID-19 mandates and restrictions, an event which violated the province’s restrictions banning gatherings with more than 10 people.

When King appeared in court in May 2021, he requested proof that the SARS-CoV-2 virus had been isolated, information he said would give the scientific backing to support the government’s sweeping COVID-19 containment measures.

King said he was summoned to court and informed by lawyers for the chief medical officer of health (CMOH) that the CMOH “has no material evidence” to provide in the case, a statement which King understood to mean that no available documentation existed proving the virus had been isolated, and therefore there was no evidence to support drastic lockdown policies.

At a July 24 court proceeding, King said he reiterated his understanding that Dr. Hinshaw, along with Alberta Health Services and the Alberta provincial government, did not have the requested material evidence to prove the isolation of the SARS-CoV-2 virus. According to King, the statement was affirmed by the judge.

But it is unclear whether Patrick King’s challenge pushing for documentation proving the isolation of the SARS-CoV-2 virus effectuated the roll-back of Alberta’s COVID-19 policy.

In an August 4 livestream, Rebel News’ Ezra Levant expressed doubt that King’s case was responsible for the phased-out lifting of the remaining restrictions in the province.

“It looks like Patrick King is putting great importance on this statement from the attorney general: ‘the chief medical officer has no material evidence,’” Levant said. “So let me explain as a former lawyer what this means.”

“It sounds like Patrick King tried to challenge the basis for the law, didn’t get very far. It sounds like there was a procedural reason for that, and then it sounds like the case against him was dropped,” Levant concluded, noting that “[t]here is no court order, no court ruling in Alberta that struck down masking, testing, quarantine in that province.”

Whether or not King affected the COVID-19 response in Alberta, the province’s chief medical officer of health has made clear that extreme measures to contain the virus will no longer be  part of Alberta’s COVID-19 policy.

In a column explaining the reversal of her province’s strict protocols, Hinshaw said that removing all risk of COVID is not possible and Albertans must “learn how to live with it.”

“We will not eliminate COVID, which means we need to learn how to live with it,” Hinshaw wrote. “Testing every person with a runny nose or sore throat is an extraordinary measure that we cannot sustain, particularly through the respiratory virus season. Legally mandating everyone to stay home for 10 days if they have any symptoms is also an extraordinary measure.”

The public health official said she must “consider not just COVID-19 but all the other threats to people’s health,” noting that the sweeping measures undertaken to combat COVID-19 have “come at the cost of not fully working on other threats, like syphilis and opioid deaths.”

Candice Malcolm, a nationally syndicated columnist and author of Losing True North: Justin Trudeau’s Assault on Canadian Citizenship, commented in an August 2 article for the Toronto Sun that Alberta will now “be treating COVID much like any other airborne illness,” adding that “Canada finally has a province willing to stand against the madness of endless lockdowns, media fear mongering and irrational paranoia when it comes to COVID-19.”

“[W]hile most Albertans let out a sigh of relief, these measures were quickly condemned and demonized by the usual suspects in the authoritarian left-wing lockdown crowd,” Malcolm remarked.

Likewise, in a July 28 statement, Edmonton Mayor Don Iveson said he was “surprised the provincial government has decided to lift public health measures,” citing “a rise in cases” and “more variants.”

He took the opportunity to advocate for residents of the city to get experimental COVID-19 shots, and praised Edmontonians for “choosing to wear masks in grocery stores and other public environments.”

“But now that public health officials are beginning to change their tune, the authoritarian lockdown crowd… have given themselves permission to condemn these experts to their heart’s content.”

“The lockdowns were deadlier than the virus for most Canadians,” Malcolm concluded. “It’s time to stop listening to the left-wing lockdown authoritarians and start living our lives again.”

News of Alberta’s removal of its remaining COVID-19 protocols comes after Alberta Premier Jason Kenney said last month that his government would not introduce a “vaccine passport” in the province, nor accept one if imposed at the federal level by Canadian Prime Minister Justin Trudeau.

Alberta’s return to comparative normalcy stands in marked contrast to the policies of many other Canadian provinces which have begun to impose vaccine passports, mask mandates, and in some cases lockdowns. However, it remains to be seen how long Alberta will remain free of harsh COVID-19 mandates.

Prophylactic COVID treatments and preventatives such as ivermectin and hydroxychloroquine used by several hundred US doctors and, in a more widespread manner, in nations such as India have not been given the greenlight for treating COVID-19 in Alberta.

Reopening in the province has largely hinged upon COVID shot uptake, but high rates of “breakthrough COVID” associated with the so-called Delta variant have led to recent reversals in the easing of COVID protocols, such as the Centers for Disease Control and Prevention’s recent guidance recommending that “fully vaccinated” people take up wearing masks indoors again.

In Quebec, a so-called “fourth wave” of the coronavirus is currently being used to justify a vaccine passport system.

As previously reported by LifeSiteNews, both Manitoba and Quebec have developed their own forms of digital vaccine passports.

In May, the Quebec government announced that they will now send “electronic proof” in the form of a QR code to those who have had a COVID-19 jab, and threatened to enforce a local COVID-19 vaccine passport which would limit access to services deemed non-essential beginning Fall 2021.

Meanwhile the government of British Columbia said in June that it is working “in concert” with federal authorities for the creation of a “vaccine passport” to be used for international travel.

In Canada’s neighbor to the south, mandated COVID-19 shots are rapidly becoming the norm as well, with California and New York the first to require the jabs for healthcare workers and state employees. Meanwhile, the U.S. government under the Biden Administration has begun requiring the injections for all federal employees.

In New York City, residents will now be forced to show proof of vaccination to access many indoor public venues.