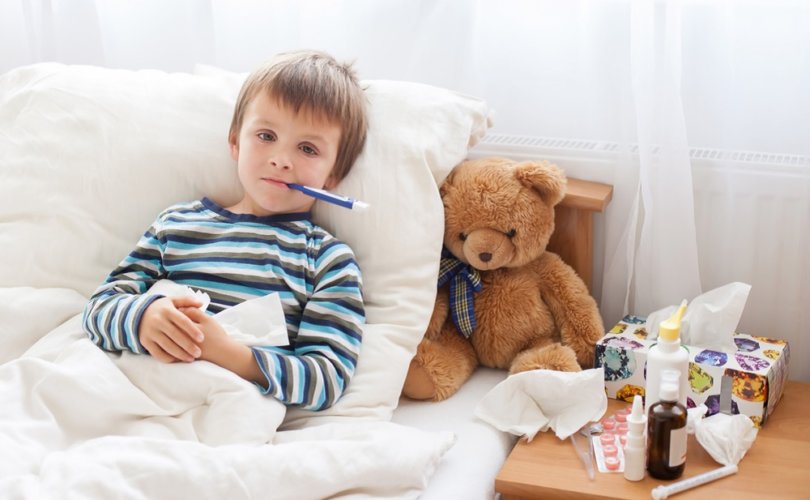 EDMONTON, Alberta (LifeSiteNews) – Anyone who stays home with an illness is automatically associated with COVID and counted as being part of the outbreak, Alberta’s chief medical officer said last week.

The clip, posted by Ezra Levant of Rebel News, has received more than 500,000 views on Twitter. It contains an excerpt of Hinshaw’s answer to CBC reporter Janet French on what the Alberta government is doing to address COVID cases and breakthroughs in public schools.

Referring to the framework in place to manage “outbreaks” in schools, Hinshaw said, “If individuals choose to not get tested for COVID but are home with an illness, they are now counted in the list as being part of that outbreak, and so it’s less dependent on needing a test to be a part of identifying where there is an issue.”

According to Hinshaw, if there is an outbreak in an Alberta school, anyone who stays home with an illness and is associated with that outbreak through contact tracing will be counted as part of the numbers for that outbreak.

Reacting to Hinshaw’s statement made, Levant opined, “To maintain a mass psychology of panic and fear, Alberta’s corrupt public health bureaucrat now automatically counts anyone staying home from any illness as a Covid case.”

As part of Hinshaw’s answer to the same question, she said, “Large-scale transmission in schools is not common … schools are impacted by community transmission.” She added that because of privacy laws, individuals are not required to offer information on why they have stayed home from school – whether as a teacher or student – due to a respiratory illness. Since they do not need to disclose and are not required to test, it appears that anyone who does stay home when an “outbreak” is declared counts as a COVID case, even without a test.

At the beginning of the press conference, Hinshaw spent about five minutes explaining why in her opinion every eligible person should be vaccinated. She did not mention any of the risks associated with the jab, which include a growing list of severe complications that have so far caused thousands of injuries and deaths.

She addressed the notion that people who have recovered from a COVID-diagnosed illness are reported to have strong immunity. “The bottom line is that my advice for those who have COVID-19 remains the same; it is still best for everyone to be fully vaccinated with two doses to obtain the greatest possible protection,” she said.

“It’s also necessary to remember… there is still some risk that anyone whether or not they have recovered from a previous COVID-19 infection or have received immunization could possibly be reinfected or could possible transmit COVID to people who may be vulnerable to severe outcomes.”

There is evidence to the contrary about reinfection and vaccines offering the greatest possible protection. In May, Dr. Peter McCullough, who was the vice chief of internal medicine at Baylor University Medical Center in Dallas, said, “COVID-recovered patients so far are racking up a terrific track record of freedom from reinfection. It’s nearly airtight … The COVID patients who recover, they have antibodies, they have T-cell protection, and robust immunity. The antibodies are a pretty nice indication that you’re protected, but these t-cell tests are terrific. These t-cell direct tests, that’s actually next-generation sequencing. That’s your microbiologic evidence of permanent protection.”

In August, mainstream journal Science – which has been in circulation since 1880 – published an article that stated “having SARS-CoV-2 once confers much greater immunity than a vaccine.” Referring to an Israeli study comparing vaccinated versus unvaccinated people, the article said, “ … never-infected people who were vaccinated in January and February were, in June, July, and the first half of August, six to 13 times more likely to get infected than unvaccinated people who were previously infected with the coronavirus.”

The same article went on to say that “in one analysis, comparing more than 32,000 people in the health system, the risk of developing symptomatic COVID-19 was 27 times higher among the vaccinated, and the risk of hospitalization eight times higher.”

The press conference was not the first time that Hinshaw made statements to contradict the opinion of world-leading scientific publications. In August, she wrote in an open letter to Albertans that she “cannot stress enough that vaccines are our most powerful tool in the fight against this virus.”

In the press conference, Hinshaw stated that “100% of new ICU admissions” were people with “no vaccine protection.” According to the official Alberta website, on September 23 there were six more patients in the ICU than the previous day – the province of Alberta has almost 4.4 million people. This approximates to 0.000001 of one percent.

The resource states that ICU admissions in the tally include those who are numbered “among COVID-19 cases.” The resource does not state why the person was admitted to the ICU, but only that they are in the ICU and have tested positive to COVID while in hospital.

In June 2020, surgeries were cancelled at an Edmonton-area hospital due to a reported outbreak that was based on a false-positive COVID test. In July 2020, Ontario Associate Chief Medical Officer of Health Dr. Barbara Yaffe made headlines when she admitted that the testing regimes used in Canada can produce upward of 50 percent false positives.