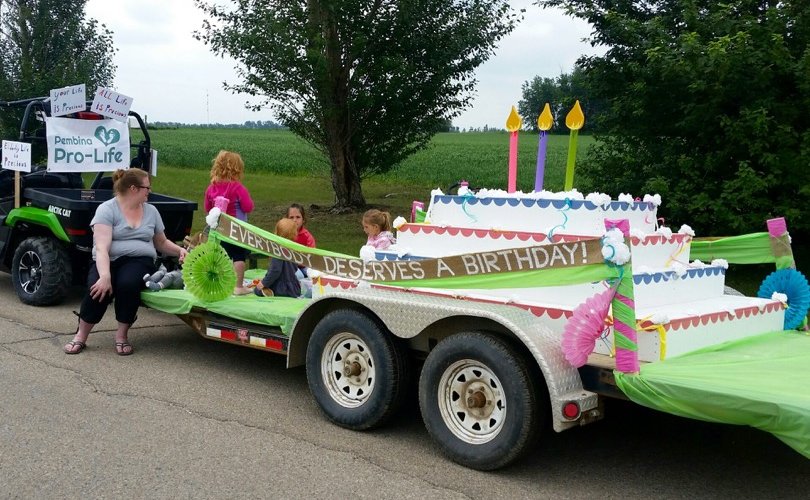 Update August 16, 2016: LifeSiteNews learned August 15 that Westlock News published Key’s letter to the editor in its July 26 edition, 5 days after our report was released.

WESTLOCK, Alberta, July 21, 2016 (LifeSiteNews) — An Alberta pro-life group is crying foul after town officials denied them entry into the town’s centennial parade earlier this month, just moments before the parade was to begin. The pro-lifers say that town officials disagreed with the group’s pro-life stance.

“It was because we were pro-life. That’s what it boiled down to,” Wes Wierenga, president of Pembina Pro-Life Society, told LifeSiteNews. The society aims to “promote respect for life from the moment of conception to natural death.”

“Town officials were first trying to tell us that our float did not fit the theme of the event, which was the 100th anniversary of Westlock. Well, we had a huge birthday cake with candles for our float,” he said. “How more fitting can you get on an anniversary, because, if you don’t have a birthday, how do you get an anniversary,” he added.

The float with a white layered cake topped with three candles had a message on the side which read: “Everybody deserves a Birthday.”

When the pro-life group pulled their float into town on the morning of July 2, a parade organizer told them that they were not permitted to join the parade because the group had not responded to a June 15 email that the town had emailed the group when it had first registered for the event earlier that month.

In that letter, Shirley Morie, chairperson of the town’s 100th anniversary committee, told the pro-life group that the committee is “unsure how your float will have the historical aspect we are trying to achieve.”

“While we don’t want to deny you, we would ask that you respect the theme and intent of the parade and re-think your request,” the letter stated.

The pro-life group immediately made enquiries about why there were not allowed in the parade. A senior organizer told them the group’s float was not in theme, even though many other floats had nothing to do with commemorating the town’s anniversary. The group was finally told that there was no room for them in the parade.

“Pro-life is not allowed,” the group was told at various times by parade organizers.

A peace officer arrived on scene, telling the group that if they did not remove themselves from the parade area, they would have their vehicle impounded and could be fined up to $2,500.

The group was then told to move their float to a nearby parking lot and wait until the entire parade was over before leaving town since the streets that led out of town were part of the parade route.

Wierenga said that at first he “couldn’t believe that town officials would actually deny our float.”

“It was sad to see this happen. I was mad and ticked off. A number of people had gone through all the work of making the float — each putting in 8 to 10 hours — only to be denied access,” he said.

Wierenga said that he would like his group to receive an apology.

“I would like to see town officials publicly apologize for excluding our group from the parade and to assure us that something like this won’t occur again,” he said.

The group has contacted a lawyer and is looking into its legal options.

LifeSiteNews attempted to contact Westlock’s mayor Ralph Leriger numerous times by phone and email for comment, but did not receive a reply.

Former Westlock resident Claudelle Key could not believe how the town treated the pro-life group.

“The town had an agenda and clearly continued to ramp up its efforts, which included lying (you're not registered, you're not in theme, we're at capacity),” she said.

“In the end, these 'gatekeepers' used threats to keep this pro-life float out of the parade.”

Key called it “ironic” that the town discriminated against some of its own citizens in an event that was to galvanize the community and encourage camaraderie.

“If this had been another group that had been denied entry, this would be in front of Alberta's human rights commission right now,” she said.

When Key submitted a letter to the local paper to bring attention to the matter, the paper refused to publish the letter. Key commented that now the local newspaper has now been “added to the list of latest local gatekeepers” who censor what they don’t agree with.