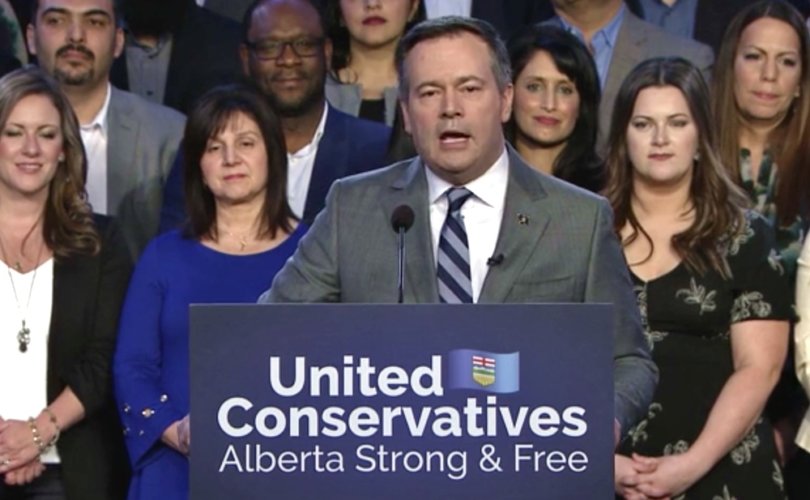 CALGARY, March 22, 2019 (LifeSiteNews) — Pundits are warning Alberta voters to expect a “bare-knuckles” campaign before heading to the polls April 16.

The ruling left-wing NDP — which is trailing badly in the polls — has made no secret of its strategy in the short campaign: to attack UCP leader Jason Kenney, the 50-year-old Catholic bachelor who left federal politics in 2016 and returned to Alberta to successfully “unite the right” by merging the Alberta Tories with the Wild Rose Party.

Last month, the NDP launched the website “The truth about Jason Kenney,” which casts the UCP leader in a luridly sinister light for his past pro-life, pro-family voting record during 19 years as an M.P. in Stephen Harper’s Conservative government.

Premier Rachel Notley, 54, alluded to the same in her first salvos at Kenney Tuesday in Calgary when she announced the election.

“A nasty record of intolerance should have no place in the premier’s office,” she said.

Notley also took a swipe at Kenney over a growing scandal centered on allegations that the UCP ran a “kamikaze” candidate in the leadership race to defeat Brian Jean, former leader of the Wild Rose Party and Kenney’s main rival, as reported in the Huffington Post.

“Two days ago we learned that Mr. Kenney cheated to win his party’s leadership. And when he was caught, he didn’t tell the truth,” Notley said.

However, Notley did allow that “I personally do not believe that Jason Kenney is racist,” in response to a question over the resignation of UCP star candidate Caylan Ford.

“But I do believe the UCP, as a party, has a problem with racism,” added Notley.

The mother of two purportedly expressed concern over “the replacement of white peoples in their homelands” and suggested that “Western culture” would collapse if “another race” takes over in Europe and North America.

Ford said the report contained “distortions” and did not represent her views, but she resigned to avoid becoming a distraction in the campaign, the Calgary Herald reported.

For his part, Kenney dismissed Notley’s remarks in a campaign stop in Leduc as “predictable” and focused on economics, the Edmonton Journal reported.

“The NDP has got to resort to the politics of personal destruction because they can’t possibly defend the worst economic record in Alberta’s modern history,” he said.

“You’re going to hear a lot of fear and smear, a lot of drive-by character assassination. It will get to ear-breaking decibels of anger.”

“The NDP has stooped to a real low in spinning Kenney’s past pro-family actions into looking spiteful against homosexuals and women, when in fact Kenney's pro-family actions benefited the common good of society, and are beliefs shared by a huge number of Albertans,” he told LifeSiteNews.

Moreover, members of Alberta’s NDP have “aptly demonstrated with their legislative and regulatory attacks” that they are “a pack of totalitarian communists who hate Christians, free speech, parental rights and children in the womb,” said Fonseca.

Those policies include making the abortion pill available at taxpayer expense under the province’s health care plan; seeking to expand access to surgical abortion beyond Edmonton and Calgary to Lethbridge, Medicine Hat, Fort McMurray, Grande Prairie, and Red Deer; passing bubble zone Bill 9, which bans pro-life speech outside the province’s two abortion centers; and passing Bill 24, which prohibits schools from informing parents when their child joins a Gay-Straight Alliance at school.

“It’s without question Alberta families need to be liberated from the yoke of Notley’s evil regime,” says Fonseca. “The real question is: is Kenney that liberator?”

Kenney letting down his pro-life base

He maintains Kenney has “abandoned his socially-conservative beliefs” as a basis for his policies.

Kenney reiterated in February that a UCP government will steer clear of abortion, reported the Edmonton Journal.

UCP members “fled” the legislature during the debate on Bill 9 “to avoid having to take a stand against the NDP assault on preborn children and free speech,” Fonseca said.

“That was a moment of shameful cowardice on Kenney’s part.”

Kenney also “flip-flopped on parental rights” when he vowed to veto a policy resolution passed by the UCP Policy Convention that parents be informed if their child got involved in a GSA at school, Fonseca said.

The UCP leader has “gone over to the dark side” on the “LGBTTIQ agenda of homosexuality and transgenderism,” according to Fonseca.

The UCP applied to march in the province’s Pride Parade in the last two years but was turned down both times, so the party held its own Pride events with Kenney in attendance.

“We’re free to love as we choose to love, we are free to live our own lives, and I think, at its best, that’s what Pride seeks to celebrate,” Kenney said at Edmonton’s 2018 UCP Pride.

The UCP needed to “reach out as a party to LGBTory,” the group that lobbies to promote the homosexual agenda in Conservative parties, Kenney said then.

Vote for the pro-life candidate: CLC

“To say that Kenney has betrayed the grassroots of his party’s base would be an understatement,” Fonseca told LifeSiteNews. “We hoped for much more from the one-time, pro-life stalwart. It’s tragic to watch his transformation into a social liberal.”

At the same time, “CLC’s approach has always been to vote based on the merit of the local candidate, not the party leader,” he said.

“This is an important election and CLC will be urging our many Alberta supporters to get-out-the-vote for any pro-life candidates that may exist in the UCP, or in other parties.”