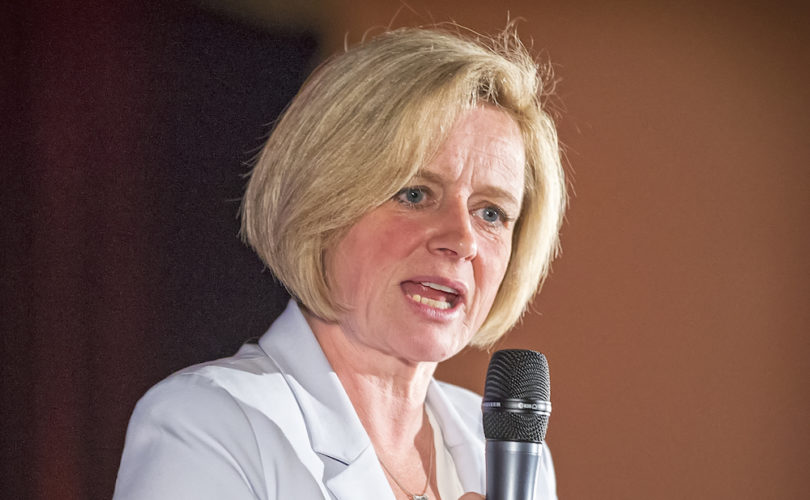 EDMONTON, Alberta (LifeSiteNews) – A top member of the Alberta government said former NDP Premier Rachel Notley falsely blamed the current leaders for a system-wide crash of the province’s vaccine database because she knew it was one of her own MLAs who caused the mayhem.

According to a report in True North, Brad Rutherford, the chief government whip and MLA for the United Conservative Party, said that a now former NDP MLA did indeed crash the vaccine portal with a hack, but the party “chose to play dumb and attack the government anyway.”

Rutherford said that this is the “most shameless stunt we’ve seen from the Notley NDP so far.”

He added that the NDP has “operated throughout the entire pandemic” in a shameless manner.

“They only worked to sow chaos and confusion at a time when opposition parties across Canada were working with government to make people’s lives better,” he noted in the True North report.

The hacking, according to recently unsealed court records, shows that Edmonton-South MLA Thomas Dang, who has since been removed from the NDP caucus, allegedly used someone else’s Alberta Healthcare number to search 1.78 million vaccine health records between September 19-23, 2021.

According to the UCP, “Dang told RCMP in a January interview that he got a hit on the premier’s private information early in the morning on Sept. 23.”

“The investigator believes that 20 minutes later, Dang performed a manual confirmation using the same information. Approximately two hours after that, Dang performed what is thought to be a third confirmation. Eight minutes after that is when Notley’s staff informed the health minister’s office,” the UCP noted.

Dang claimed he hacked the AHS’s vaccine database to test its vulnerabilities and that he found a woman’s healthcare number in the process using the birthdate of current Alberta Premier Jason Kenney and then told NDP chief of staff Jeremy Nolais as well as party communications director Benjamin Alldritt about his findings.

The court records show, according to the UCP, that “Notley misled Albertans when she denied knowing that Edmonton-South MLA Thomas Dang hacked Alberta’s vaccine records system using information that was not his own.”

Notley had denied knowing anything about Dang’s illegal searches after reports first broke last year. She later admitted to knowing about “anecdotal reports” in September 2021.

NDP MLAs, while Dang’s “brute force attack” was taking place, took to Twitter to blame the UCP government for incompetence, despite many in the party knowing it was one of their own who caused the chaos.

NDP MLA Kathleen Ganley tweeted on September 19, 2021, “If only those who spent hours waiting in cues to get a my AB health account had been told not to bother, sigh. Guess that would have required a government that cared.”

Screenshots posted online by some individuals reveal that there was a queue of between 20,000 to 50,000.

Some Albertans began posting screenshots of the number of users ahead of them in line, which showed a queue of some 20,000 to 50,000 queries in line to access health records. Dang’s hack caused the vaccine database website to be flooded with search requests.

In November, the UCP did report a possible breach of its vaccine portal system. At the time, Notley shared this information with her follower on Twitter, knowing that it was Dang who had caused the issue.

Dang faces fines of $200,000 if found guilty. Criminal charges against him have been dropped, however. Dang is set to appear before a court on July 27.

Rutherford noted that as Dang has now been charged, “we hope to learn more about the role Rachel Notley and her senior staff played in this hacking scandal.”

— Article continues below Petition —
PETITION: Demand the Conservative Party apologize for not resisting Trudeau's COVID regime
Show Petition Text
2570 have signed the petition.
Let's get to 4000!
Thank you for signing this petition!
Add your signature:
Show Petition Text

In July 2021,  Kenney said that he was “opposed” to an Alberta vaccine passport and would not be bringing one to his province.

Many people rushed to download their proof of having had the experimental jabs.

Notley served as Alberta’s premier from 2015 to 2019 and while in power her government targeted faith-based institutions, including publicly funded Catholic and Christian schools.

During the COVID crisis in Alberta, Notley suggested that the province should enact a door-to-door COVID vaccine campaign.

Notley has also been a vocal proponent of the COVID injections and lockdowns as a means to control the virus.