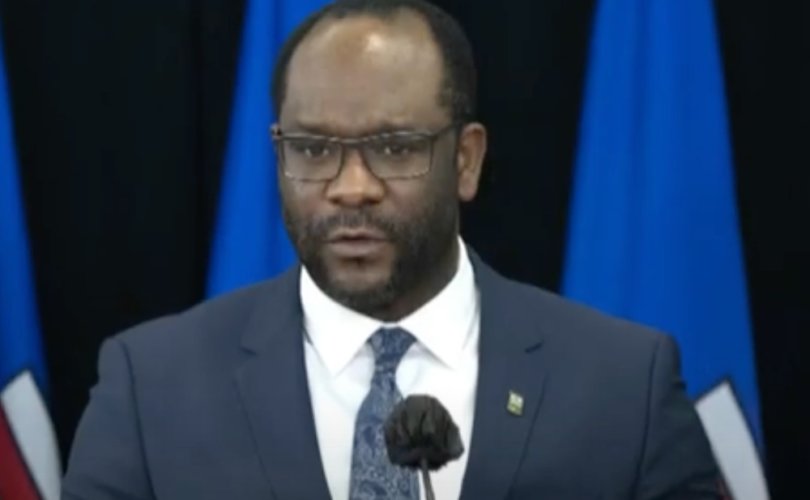 EDMONTON, Alberta (LifeSiteNews) – Alberta’s Minister of Justice, who saw three Christian pastors jailed for violating COVID rules, was removed from his duties after allegations he tried to use his position to influence the outcome of a driving ticket.

On March 10, 2021, Alberta Justice Minister Kaycee Madu was allegedly seen by an Edmonton cop driving through a playground zone while on his cellphone. He received a $300 distracted driving ticket.

According to a CBC report, Madu phoned Edmonton Police Chief Dale McFee to speak with him about the ticket shortly after the incident.

“I have spoken with Minister Madu about the March 10 incident reported in the media today,” Kenney tweeted.

“I conveyed to him my profound disappointment in his decision to contact the Edmonton Police chief after receiving a ticket for a traffic violation.”

I have spoken with Minister Madu about the March 10 incident reported in the media today.

I conveyed to him my profound disappointment in his decision to contact the Edmonton Police Chief after receiving a ticket for a traffic violation.

Kenney said that Alberta’s Energy Minister Sonya Savage will take on Madu’s duties and that an “independent investigator” will be tasked with looking into the incident.

McFee confirmed with CBC that Madu did call him, but to be “very clear,” he said, “he never asked to get out of the ticket.”

Later, it was confirmed that Madu had paid for the ticket.

However, during the call with McFee, Madu, who was born in Nigeria, said he had concerns police might be racially profiling minorities.

Madu claimed that due to the timing of the incident, he wanted to ensure that he was “not being unlawfully surveilled following the controversy surrounding the Lethbridge Police Service. I also raised concerns around profiling of racial minorities that was in the media at the time.”

Madu then said McFee “assured” him that was most “definitely not the case.”

The Justice Minister wrote  in a series of tweets last week, he said he was not trying to use his influence as justice minister to get his ticket canceled.

Many have reached out to me wanting to know the circumstances of the ticket that I received and my subsequent call to the Edmonton Police Service Chief, Dale McFee. I have issued a formal statement to the media. The premier has also issued a statement on his planned action.1/13

“With hindsight now I can see how that may be perceived,” he tweeted.

Today, news broke that a retired Alberta judge will be overseeing the independent investigation into Madu’s phone call with McFee, with a report to be released to the public on February 15.

While Madu has been Justice Minister, three Christian pastors have been jailed because they defied COVID-19 health rules regarding church services that limit congregation size.

The most well-known pastor to be arrested was Artur Pawlowski, who just recently spent a night in jail after being arrested on New Year’s Day in a highway takedown for allegedly breaking a court order.

Pawlowski and his brother were arrested in a highway takedown in May2021 for holding worship services at their Calgary church amid COVID lockdowns.

In May 2021, only two months after calling Edmonton’s police chief about a ticket, Madu said, “Enforcement will be done, and Albertans will see it being done” against COVID rule-breakers such as the Pawlowskis.

Madu then claimed that he would not direct police to enforce COVID rules, nor interfere with how the courts prosecute tickets.