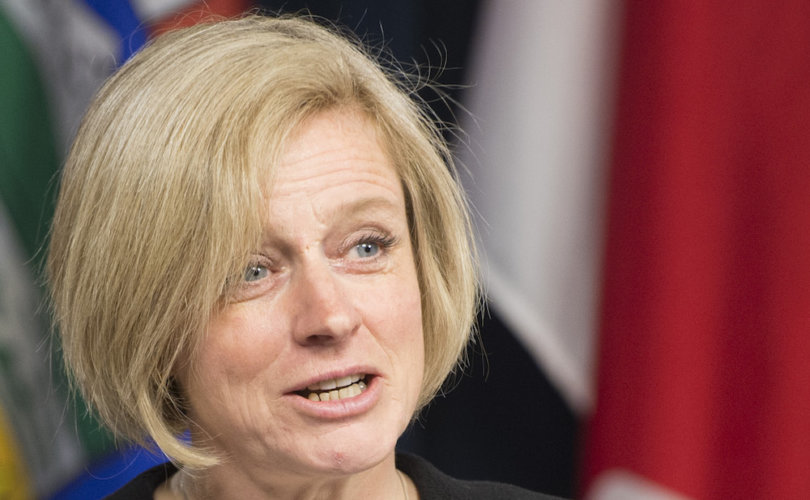 EDMONTON, Alberta, April 19, 2016 (LifeSiteNews) — A showdown took place in the Alberta legislature yesterday after the Alberta PC Party introduced a private members motion urging the government to affirm parental rights in deciding what kind of education is best for their children – be it public, private, or home schooling.

But the reigning NDP party, in an unprecedented move, countered the motion by introducing an amendment that gutted it of its original intent by, critics say, affirming that choice in education is the government’s prerogative, not parents.

Things heated up when the PC Party expressed outrage over the proceedings, stating that it was “extremely unusual and irregular for a private member’s motion to be amended.” The chain of events became even more bizarre when NDP House Speaker Bob Wanner, MLA for Medicine Hat, declared that the amendment was “in order,” reading his ruling from a pre-written judgement on the matter that had somehow also made it into the hands of the opposition.

The incident became national news when PC MLA Ric McIver, the author of the motion as well as the interim PC leader, arose and challenged Speaker Wanner’s predetermined ruling on the amendment.

“You made the ruling before you heard people make their arguments. That’s a fact. This was printed out before people stood up in this House and made their arguments. I know because I had it in my hand,” he said.

“This is not the way you run a Legislature. I’m sorry. I know you’re unhappy with me, but I’m unhappy with you, when you make a ruling before you hear the evidence,” he added.

When Speaker Wanner warned McIver to sit down or be expelled from the room, McIver refused.

“No, I will not, not unless you reverse your ruling, Mr. Speaker,” he said.

McIver was eventually escorted from the room by a Sergeant-at-Arms while Wanner was replaced as speaker for the house.

McIver’s original motion (M-504) simply states: “Be it resolved that the Legislative Assembly urge the Government to affirm its commitment to allowing parents the choice of educational delivery for their children, including home, charter, private, francophone, separate, or public education programs.”

The motion appears to come as a response to the NDP’s growing hostility to directing tax dollars to private as well as home schools.

In 2012, current NDP Education Minister David Eggen, then an opposition MLA, chastised parents for choosing alternative schools for their children. “Why spend $10,000, $20,000, $30,000 on a private school when you probably get a better education in the public school down the street?” he said at that time.

The amendment to the PC motion, proposed by NDP MLA Robyn Luff, Calgary-East, states: “Be it resolved that the legislative assembly urge the government to support public education, including francophone and separate schools, while affirming its commitment to allowing parents the choice of education delivery for their children, including home, charter and private education programs in such instances where they offer alternatives not available in the public system.”

PC MLA Richard Starke, Vermilion-Lloydminster, slammed the amendment during the proceedings for making parental choice to school privately or at home “conditional” upon proving that the alternative they want for their child is not available in the public system.

The legislature was forced to adjourn before a conclusion to the debate on the amendment could be reached.

One parental rights group in the province is outraged over what it says is a brazen attempt to further strip parents of their rights.

“The amendment to the motion entirely guts the motion,” said Donna Trimble, executive director of Parents for Choice in Education, to LifeSiteNews.

“The amendment essentially states that the only way you can access funding for alternative educational options is if you cannot find those alternatives in the public system. What that means is that now the state decides for parents whether or not they have the right to use their own tax dollars to access alternative education,” she said.

Trimble said a “dangerous precedent” would be set if the amendment passes.

“I am absolutely upset and deeply concerned. It should not be the state’s job to decide to tell parents where their own dollars should go with regard to supporting their children in education,” she said.

Trimble’s organization has been actively opposing recent government encroachment of parental rights. The group has been opposing Bill 10, passed last year, which forces Christian, Muslim, and Jewish schools to set up “gay-straight alliances” while erasing a provision in the law that would have allowed parents to remove their children from classroom discussions of homosexuality.

“Bill 10 stripped away parental autonomy and school autonomy,” Trimble said. “Now we are seeing the waterfall effect with this amendment where parents are being threatened with losing more rights,” she added.

Parents for Choice in Education is organizing two rallies on May 14, one in Calgary and the other in Edmonton, to tell the NDP government to uphold parental rights.

“Article 26 of the Universal Declaration of Human Rights states that ‘parents have a prior right to choose the kind of education that shall be given to their children.’ Therefore parents need to be fully included in the task of creating a welcoming, caring, respectful, and safe learning environments at their children's schools,” Trimble said.

Watch highlights from the yesterday's debate: