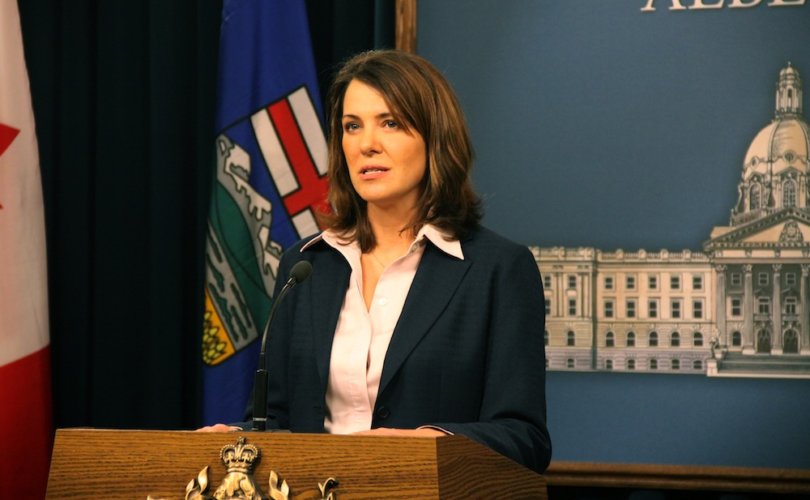 EDMONTON, Alberta (LifeSiteNews) — Alberta’s new premier Danielle Smith has doubled down on her intention to grant legal protections to the unvaccinated, adding that she will not implement any lockdown-style COVID restrictions in the province.

While speaking to the Edmonton Chamber of Commerce yesterday, Smith blasted vaccine passports and mandates, and told those in attendance that she was going to forge ahead with her previously announced plan to amend the province’s human rights code to make it illegal to discriminate based on vaccine status.

“So, one of the things that will be coming through within the fall as well is a change to the human rights code to make it illegal to discriminate against anyone on the basis of their COVID vaccination status. Now, I recognize that there are still some organizations and some businesses in Alberta that is doing that,” said Smith. “And I just want to sort of give you fair warning that we are going to be making a serious pivot in that regard. And I would just ask if you would work with us to align your policies with the direction that we want to go in Alberta.”

Smith also promised Albertans that the province will remain permanently open for business, seemingly taking the opposite approach of Prime Minister Justin Trudeau and the province of Ontario’s top doctor, Kieran Moore, who both threatened this week the return of COVID-era mandates if citizens do not “voluntarily” begin wearing masks and taking their “booster” shots.

“This is a place that believes in free enterprise, and this is a place where we’re not going to be making arbitrary decisions that are going to disproportionately impact small and medium businesses.”

Smith’s address to the Edmonton Chamber of Commerce was her first public appearance after being sworn in as premier earlier this month, at which she drew headlines for saying that the unvaccinated were the “most discriminated against” group in her “lifetime.”

Smith also promised to reorganize the province’s health system, which includes getting rid of those in charge who pushed for COVID lockdowns and imposed a vaccine mandate on its workers.

Officially taking over as the premier and the leader of the United Conservative Party (UCP) last week, Smith also introduced her new cabinet on Friday, which included the appointment of pro-life UCP MLA Todd Loewen, who has history of making strong pro-family statements and ran against Smith during the leadership race.

Smith’s statements against vaccine mandates are consistent with the fact that COVID jab trials have never produced evidence that the vaccines stop infection or transmission.

Her position on lockdowns is likewise supported by a growing body of scientific evidence indicating that such measures were more harmful than the coronavirus itself.