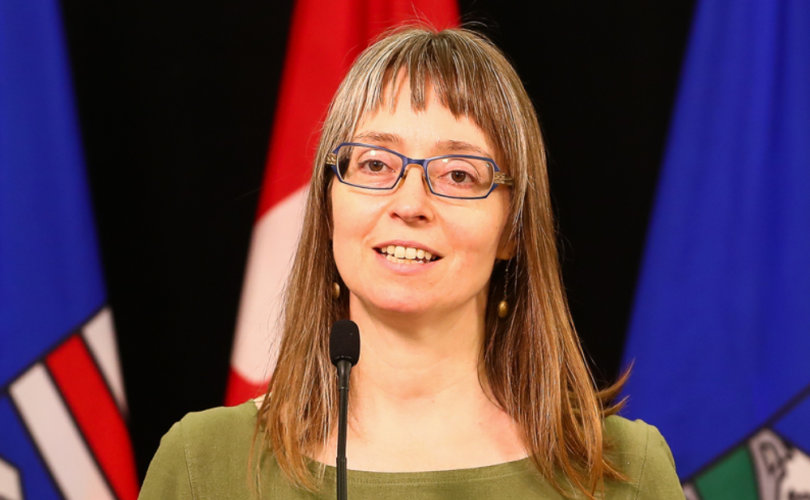 The Justice Centre challenged the constitutionality of Dr. Hinshaw’s health orders, with the litigation commencing in December 2020. The legal case has been delayed repeatedly by the Alberta government in the past ten months.

The Alberta government did not provide the court with evidence to justify its Charter-violating lockdown measures until July of 2021. Dr. Hinshaw was scheduled to be cross-examined at trial on September 27 and 28.

Shortly before the trial was to commence on September 20, Counsel for Alberta requested another adjournment. The government’s lawyers claimed that Dr. Hinshaw was simply too busy “managing” the “Fourth Wave” to come to court.

Lawyers for Alberta claimed on September 16, 2021 that due to the “escalating crisis” Dr. Hinshaw and a second witness, AHS official Deb Gordon, could not testify, because both needed to be “available around the clock until further notice, in order to protect the health care system.”

The Justice Centre has now learned that, upon the Alberta government obtaining the adjournment, Dr. Hinshaw booked a three-day vacation, including the very days she was scheduled to testify in court.

Since December of 2020, throughout the court challenge, the government has asked for leniency, and has been granted leniency by the court, resulting in extensive delays in production of evidence. The Court gave the Alberta government until July 2021 to produce their evidence justifying the Charter-violating lockdowns and restrictions on Albertans, including the Hinshaw Affidavit.

The Justice Centre requested dates to cross examine Dr. Hinshaw on her evidence. However, on September 16, the first day of yet another declared “state of emergency” due to COVID, the Alberta government told the court that Dr. Hinshaw was too busy managing the crisis and could not be available for cross-examination.

The matter was therefore adjourned, with no new court date set.

On September 28, 2021, the Crown notified the Justice Centre and the Court that “Dr. Hinshaw intends to take three days away from her role as the Chief Medical Officer of Health at the end of this week.” The Crown acknowledged that “Dr. Hinshaw’s decision to take time off may appear to conflict with the representations” made to Court that resulted in the adjournment of the trial of this action.

“As the Justice Centre has pointed out for well over a year, Dr. Hinshaw has excessive unilateral power under the Public Health Act, with virtually no accountability to the democratically elected Alberta Legislature,” stated Jay Cameron, Litigation Director for the Justice Centre.

“For more than eighteen months, Dr. Hinshaw has issued Orders which close houses of worship and all kinds of businesses, saw pastors thrown in jail for holding church services, prevent social gatherings, restrict movement, and even prohibit peaceful outdoor protest against her draconian and sometimes irrational measures,” continued Mr. Cameron.

“When Dr. Hinshaw was called on to testify in court in defence of her Orders, she said she was too busy running the province to come to court, and needed an adjournment. Once the adjournment was obtained, she booked herself a vacation,” he added.

Cameron concluded: “Albertans are once again suffering under lockdown measures similar to last winter after repeatedly being told there would be no more lockdowns, and after it has been repeatedly proven that lockdowns are ineffective and cause tremendous harm to society.”