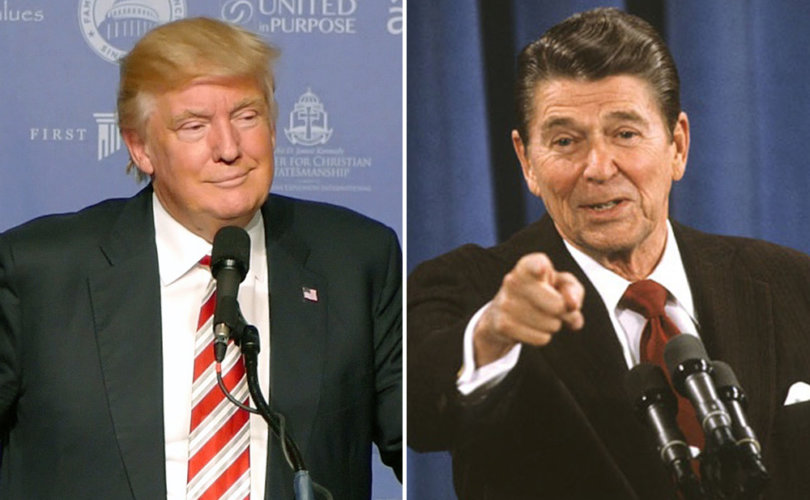 A popular U.S. history textbook describes Ronald Reagan as 'no intellectual,' and Donald Trump is called a 'swaggering colossus of ignorance, vanity, and vulgarity.

November 25, 2019 (LifeSiteNews) – Partisan indoctrination by ostensibly-neutral public schools remains an issue of grave concern to parents across the United States, and a new report details several glaring examples from a prominent history textbook.

Now in its 17th edition, The American Pageant is a U.S. history textbook that has been published since 1956 and is commonly used in Advanced Placement history classes. But its prominence as a purportedly-authoritative resource is actually part of the problem, argues Education & Research Institute board chairman Daniel Oliver at The American Conservative.

Oliver contends that the textbook is teeming with “divisiveness” and “devotes almost twice as much space to liberal politicians as their conservative counterparts,” and quotes several examples of Pageant editorializing about Republican presidents with demeaning subjective rhetoric, rather than merely presenting the facts of both sides in a neutral way.

Ronald Reagan was “no intellectual,” the book tells students, Herbert Hoover was “standoffish,” and Dwight Eisenhower exemplified “the bland leading the bland.” Donald Trump, meanwhile, “bullied, belittled, and bamboozled 16 rivals to snag—some said hi-jack—the Republican nomination,” while his “legions of critics, including many Republican grandees, considered the brash billionaire a swaggering colossus of ignorance, vanity, and vulgarity.”

“Franklin D. Roosevelt garners a staggering 299 mentions in the book,” Oliver notes. “Nixon, who is the lucky subject of the most detailed section on a Republican, counts 135 mentions, but most of that coverage is about Watergate.”

In an extensive review of Pageant’s 12th edition, Hillsdale College historian Burt Folsom argues that the book is full of “distortions,” “contradictions,” and “defective historical methods” feeding a false conclusion that “the United States is fundamentally corrupt, and that the world is often worse off because America exists and has so much global influence.”

Among the examples cited by Folsom are instances of Pageant caricaturing serious policy disagreements, glossing over information that contradicts favored narratives, and caricaturing political ideologies it purports to explain.

The ubiquity of such textbooks demonstrates that the problem of biased education runs deeper than individual educators with agendas, Oliver argues. “Since the passage of the No Child Left Behind Act in 2001, a public school’s funding has depended partially on the regurgitation of government-endorsed facts,” he says. “That’s often left educators without the time to teach their subjects any other way, even if they want to.”

The American Pageant is not the only politically-biased textbook used in AP history classes, and textbook bias is just one manifestation of left-wing agendas in education. The National Education Association formally endorses and contributes to a variety of causes unrelated to education, including abortion on demand. There are also controversies across the country over sex education curricula crafted by Planned Parenthood and containing material that promotes promiscuity, homosexuality, gender confusion, and other radical secular values.

More information on political bias in public school textbooks can be found at the Education & Research Institute’s website, TrueAmericanHistory.us.