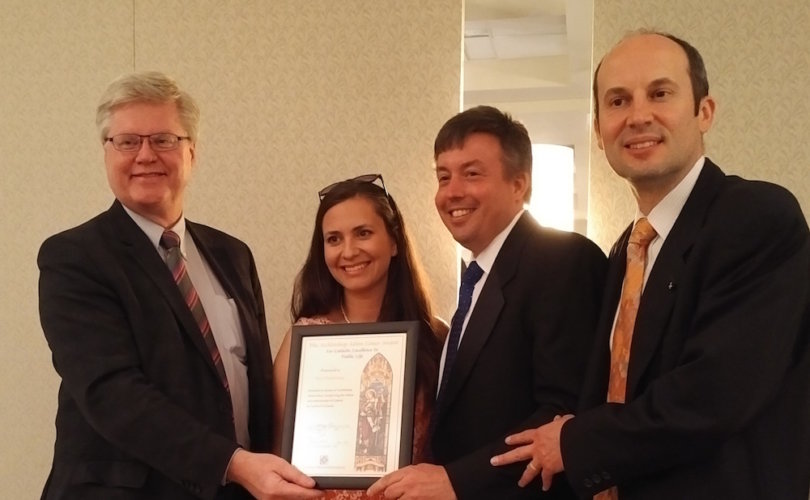 Fittingly, Schadenberg, executive director of the Euthanasia Prevention Coalition, received the award a day after co-sponsoring a June 1 rally on Parliament Hill as part of his ongoing campaign against Canada’s legalization of assisted suicide and euthanasia and the Liberals’ Bill C-14.

The Trudeau government’s law is intended to amend the Criminal Code to comply with the Supreme Court’s Carter ruling, which struck down the existing law prohibiting assisted suicide and euthanasia as unconstitutional. That decision took effect June 6.

Schadenberg is a leading figure in the battle against Bill C-14 — now before the Senate — which he has described as “a disaster” that provides “legal cover for murder.”

“For over ten years, Alex has been the most prominent and significant leader in terms of warning us about what indeed is coming to fruition, unfortunately, in Canada,” noted Christian Elia, executive director for CCRL, “and relentlessly working at all levels to convert hearts and minds why assisted suicide and euthanasia is disastrous for our society.”

“He could have won this award years ago based on his outstanding work in combatting assisted suicide and euthanasia,” added Elia.

“It’s particularly noteworthy that he received it during this critical time here in Canada, in which the Supreme Court and Parliament and the Senate are determined to change forever the nature of Hippocratic medicine, and the difference between dying and being killed.”

“Obviously I’m thankful that the CCRL recognized me especially with everything going on,” said Schadenberg, a father of six. “It’s been a very difficult year, with the Supreme Court decision; it’s a great gift to me at this time, and I’m very thankful, very thankful.”

As part of its resistance against legalized euthanasia, the EPC will be promoting Compassionate Community Care, he told LifeSiteNews.

The CCC is a non-profit organization of health care providers and advocates who will “provide support, advice for people dealing with significant health questions, possibly related to euthanasia and assisted suicide. We are involved with helping people with those situations, particularly if they feel pressured,” said Schadenberg.

With assisted suicide and euthanasia now legal, he added, the CCC is “very important.”

“There will be lots of people finding themselves in very difficult circumstances,” Schadenberg said. “Who’s going to give them advice and help? All we’re doing is, we’re taking our expertise and helping people in a bad time, with how they can get through that situation.”

The EPC will also be releasing the documentary, Vulnerable: The Euthanasia Deception, at the end of June. Produced by DunnMedia, it features 14 interviews with Belgian doctors and families warning of the dangers of euthanasia. Segments are already available here.

Douglas Farrow, Professor of Christian Thought and current holder of the Kennedy Smith Chair in Catholic Studies at McGill University, told the crowd at the CCRL event that Catholics must be ready to engage in civil disobedience in a country that exalts its view of personal autonomy above natural law and morality.

The “state today does not acknowledge that there is any higher form of law than its own law. It regards it a duty of its secularity that it should make no such acknowledgment. Conscience-and-religion claims have thus receded into the realm of the non-rational,” Farrow said.

Indeed, “one can no longer appeal to the fundamental demands of morality, for the state does not know what to do with moral questions. It knows only choices, choices that rest on the freedom of indifference.”

Catholics face in Bill C-14 a law that is “intrinsically evil,” noted CCRL’s Elia. “We must disobey it in its entirety. Catholic physicians, Catholic hospitals, Catholic health-care networks must not take part in any of it.”