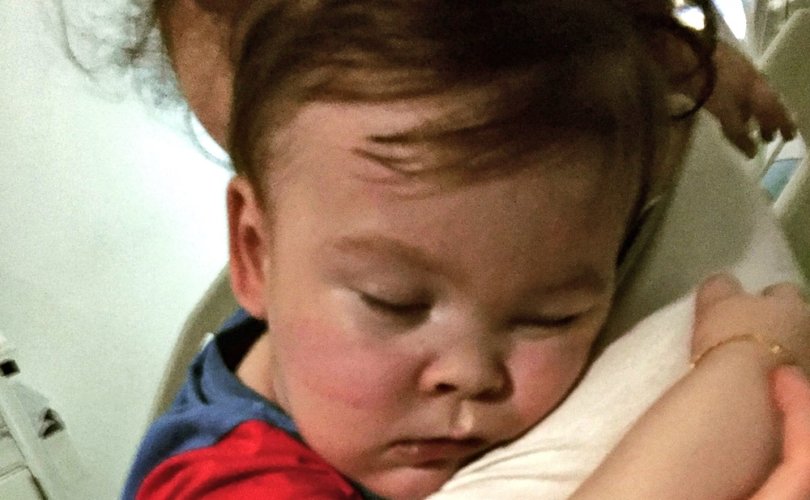 Alfie Evans with his mom Kate after being removed from his ventilator April 24, 2018.Facebook

LONDON, May 14, 2018 (LifeSiteNews) – The question of what caused the death of UK toddler Alfie Evans may never be known. The UK High Court refused today to order a post-mortem examination of the toddler’s remains at the request of a pro-life advocate.

John Allman made an “urgent application” to the UK High Court in Westminster today to prevent the destruction of the late toddler’s remains without a prior post-mortem examination and toxicology report. The baby’s remains are scheduled to be interred today in a private ceremony.

Alfie died at 2:30 AM on April 28th at Alder Hey Children’s Hospital in Liverpool. His death followed a four-day battle for life after his ventilator was abruptly removed. An Italian newspaper reported that a nurse administered “four drugs” to Alfie two hours before he died. Two sources close to Alfie’s family told LifeSiteNews that these were “injections.”

Allman went to court after corresponding with the Liverpool coroner, André Rebello OBE. On May 8th, Rebello stated that Alfie Evans died from natural causes and that he had no duty to investigate

“Alfie Evans died from a natural cause of death,” the coroner wrote,  “and there was no duty for a coroner to investigate under the Coroner and Justice Act 2009 or under any other legislation.”

Rebello said he did not have to investigate because a medical certificate and been issued, and he was satisfied that there was nothing unnatural in the infant’s death.

“…There was not a coroner’s investigation as a medical certificate as to the cause of death was issued under s22 Births and Death Act 1953 of which I was satisfied was a death from natural causes,” he wrote.

Rebello referred Allman to the testimony of medical experts in the court documents pertaining to the dispute between Alfie Evans’ parents and the Alder Hey NHS Foundation Trust.

Allman was unsatisfied, however, as Alfie was still alive when the experts predicted how he would die, and it is still uncertain what his “undiagnosed disease” was. There was also the problem of the “four drugs” story. In Allman’s view, only a proper post-mortem would have exonerated the staff of Alder Hey from suspicion.

“It is likely that Alfie’s cause of death will quite likely be discovered, when the post mortem examination is carried out of Alfie’s mortal remains, to have been natural causes,” Allman wrote to the coroner.

“But I am aware of rumours and conspiracy theories too, that instead postulate accidental death (e.g. death that was an unintended side effect of over-zealous analgesia intended to keep Alfie comfortable), and even (I am sorry to have to remind you) homicide,” Allman continued.

“A toxicology report may reveal to what extent, if any, medication given to Alfie before he died may have shortened his life. It could therefore exonerate fully those unfortunate health professionals whom, somewhat irresponsibly, until your inquest reveals the truth and silences the wagging tongues, various conspiracy theorists are wont recklessly to accuse of homicide.”

Allman warned Rebello that if he allowed Alfie’s body to be destroyed without a post mortem, he would be complicit in the destruction of evidence that could establish the actual, “as opposed to the predicted,” cause of his death. Rebello would also “undermine public confidence in [his] office” of coroner.

Allman made his application to the High  Court today without a lawyer. He argued that it was in the public’s interest to know what caused Alfie’s death. Because Alfie died while being detained by the state, Allman explained to LifeSiteNews, the public has the right to know how he died. The judge, however, was not convinced.

“The judge seemed to have difficulty with the concept that Alfie died while detained by the state,” said Allman, “even though I said to him that [Alfie] was required by an order of the Supreme Court to remain on the premises of a public authority that had applied for an order to that effect,  and if that didn’t amount to being detained by the state, then what did?”

“He died while he was detained by the state, period.”

Despite today’s disappointment, Allman has not given up.

“I’m going to fight for judicial review of the coroner’s decision, and I’m going to do it well,” he promised.

He feels that he could have only a “pyrrhic victory to some extent” if the principal evidence as to the cause of Alfie’s death–the child’s remains–is destroyed by then.

“There are loads of people who think there’s something fishy going on,” Allman told LifeSiteNews.

He stated that there has been a “public outcry”, with people wondering if Alfie may have been damaged thanks to a vaccine, for example.

“People will speculate if they’re not given accurate information,” he said.

LifeSiteNews contacted the Liverpool Coroner’s Office to confirm that no toxicology report had been done on Alfie Evans, even after the allegations aired by the Nuova Bussola Quotidiana. Rebello’s reply was terse:

“Following preliminary enquiries this child’s death has been registered with the local registration service. I am satisfied that there is no duty to investigate under the Coroner and Justice Act 2009. I cannot comment on media speculation.”

Alfie Evans’ funeral was scheduled today at an undisclosed location. It is closed to uninvited members of the public and the media. Hundreds of well-wishers showed their respects for the child and his parents, Tom Evans and Kate James, by lining the streets beside Liverpool’s Goodison Park as the funeral procession drove by.