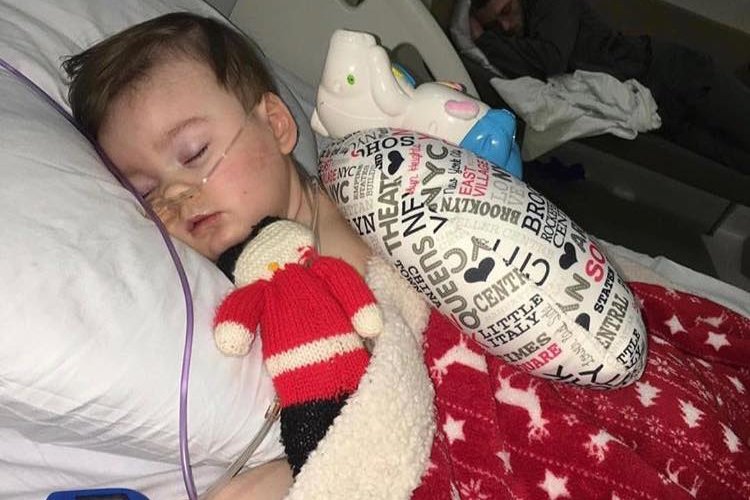 ROME, April 25, 2018 (LifeSiteNews) —  A UK Court has rejected an appeal to allow Alfie Evans’ parents to take him to Italy, upholding Justice Anthony Hayden’s earlier ruling not to allow them to seek care for their child abroad.

The decision came just before 7pm local time. Justice McFarlane told those assembled in the courtroom: “This is awful for everyone concerned. We are in the middle of palliative care plan at Alder Hey Hospital. I can see no basis that judge [Hayden] was wrong.”

The news was confirmed by reporters in the courtroom.

On Monday afternoon, the Italian government granted Alfie citizenship in a bid to transfer him to a Vatican-run hospital in Rome. But Justice Anthony Hayden ruled to have the child’s ventilator removed instead. The order was carried out by Alder Hey hospital staff on Monday evening at 9:17 p.m.

Alfie defied everyone’s expectations by breathing on his own. Parents Tom and Kate have fought every step of the way since this time to secure oxygen, water, and food for their son. The toddler’s doctors say that Alfie has an undiagnosed neurological condition that has resulted in serious and irreparable brain damage, and that it is not in his best interest to receive care elsewhere.

Thomas Evans and Kate James were represented separately at today’s hearing, and each filed an appeal.

A representative from the Italian Embassy to the UK was also present in the courtroom.

According to a SkyNews reporter present in the courtroom, the lawyer representing Thomas Evans, Paul Diamond of the Christian Legal Centre, told the court an Italian military air ambulance was on standby at the request of Pope Francis.

Lord Justice McFarlane replied, saying that authorities in Italy and the Vatican have “no jurisdiction” over decisions about Alfie.

During the hearing, is also emerged that Thomas Evans sought to bring private prosecution against three doctors yesterday, with the charge of conspiracy to murder.

The legal team for Alfie’s mother, Kate James, told judges she wanted the hospital to take the necessary steps to maintain Alfie’s life today and that he needs “immediate intervention.”

Kate’s lawyer, Jason Coppel, noted that Alfie was expected to die relatively quickly once his ventilator was removed. “He hasn’t, he’s continued to breathe for a substantial period,” he said.

Justice McFarlane questioned a submission surrounding Alfie’s right to be treated in Italy. McFarlane asked how the existence of an EU right to obtain medical help in Italy impacts the decision the court has to make, which “must be in the child’s best interests.”

Coppel argued that EU law gives parents Thomas Evans and Kate James the right to take Alfie to Italy for care. Justice McFarlane responded that the court doesn’t think it is “in his best interests” to go.

The judges then heard arguments from the legal team for Alder Hey Children’s Hospital. The lawyers argued that Alfie’s breathing on his own is “not a change in circumstances.”

“It was never suggested death would be instantaneous,” hospital lawyers said.

“The tragedy for the parents is that Alfie does look like a happy and healthy child,” a lawyer for Alder Hey said. He said it would be “astonishing” if the arguments over free movement (allowing Alfie to travel to Italy) were to trump his best interests.

Thomas Evans’ lawyer responded: “Let’s not let him starve in a hospital ward … what kind of country are we becoming? He asked the court to allow Alfie and his parents to “get out of a judicial straight jacket” and to get out of a system where best interests means someone needs to die.

On Monday, shortly before Judge Hayden ruled to remove Alfie’s life support, Pope Francis tweeted out in strong support of the child and his parents. The pontiff said: “Moved by the prayers and immense solidarity shown little Alfie Evans, I renew my appeal that the suffering of his parents may be heard and their desire to seek new forms of treatment may be granted.”

Yesterday, as Alfie continued to breath on his own, the President of the European Parliament, Antonio Tajani, said the toddler should be given another chance in Italy.

Tajani tweeted: “The power of love is defeating the cynicism of those who have pulled the plug. All my support to Alfie and his extraordinary parents.”

This morning the President of Poland, Andrzej Duda, defended Alfie, saying: “Alfie Evans must be saved! This brave little boy has proven again that the miracle of  life can be stronger than death. Perhaps all that’s needed is some good will on the part of decision makers. Alfie, we pray for you and your recovery!”

It is still unknown if Alfie will be allowed to go home.