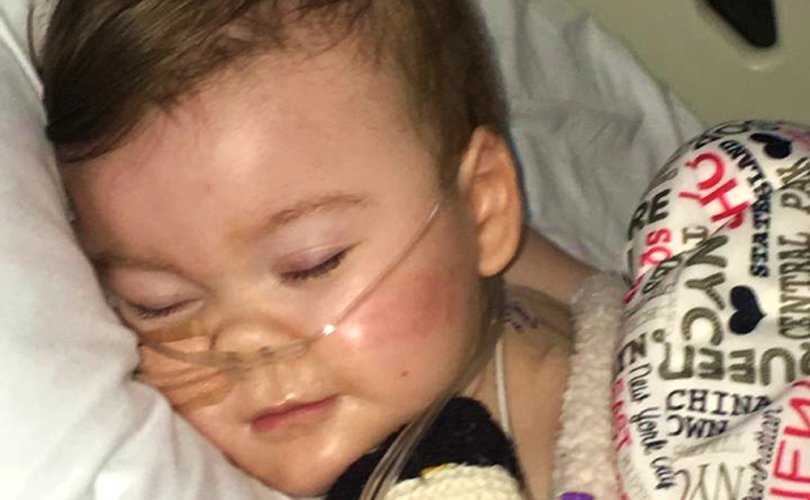 POLAND, April 26, 2018 (LifeSiteNews) – A Polish doctor has stated that UK toddler Alfie Evans is not “dying” and is certainly not “brain-dead.”

Dr. Izabela Pałgan, a pediatrician and children’s oncologist from Bydgoszcz in Poland, told Radio Wnet April 25 that in her professional opinion, doctors at Alder Hey hospital in Liverpool where Alfie is being kept are misdiagnosing the boy.

“Doctors at the hospital in Liverpool asked the court to agree to the separation of the infant from life-support, on the grounds that it would be in the 'best interests' of the child. The infant is not a dying child. He is not brain-dead,” she said, as reported by Polish news portal Fronda.pl.

Pałgan said that Alfie’s brain scans do not show that he is in a “terminal state.” They do not, for example, show the state of his brain stem, she said.

“The child reacts to the voice of his father, he periodically opens his eyes, he tightens his mouth around his soother. The parents insist that he is making contact with them,” she added.

Videos taken by the family and posted to Facebook show the toddler yawning, making eye contact, responding to voice, sucking his dummy.

The child, who is lying ill in Liverpool’s Alder Hey children’s hospital, is at the center of a dispute between his parents, the British courts, and the hospital. The hospital and the courts have decided that the child is terminally ill and that it is in his  “best interests” to die. His parents, Tom Evans and Kate James, disagree.

Dr. Pałgan claims to have examined Alfie in Britain some time ago at the request of Alfie’s parents. They had asked for second opinions.

A court order had Alfie removed from his ventilator on April 23 just after 9:00 PM. He defied everyone’s expectations by breathing on his own. He has now been breathing on his own for over 60 hours. Parents Tom and Kate have fought every step of the way since this time to secure oxygen, water, and food for their son. They would like to take him for treatment in Italy, but the courts have consistently ruled against that.

The Polish doctor said that the fact that Alfie can breathe on his own, coupled with his MRI, prove that he is not in a terminal state.

She said it appears that Alfie has been “imprisoned” by the hospital.

“That child is imprisoned there,” she said. “They refused to allow the parents to transfer their child to other hospitals that offered help. It’s a violation of human rights, of the rights to live, the rights of parents. It’s unthinkable.”

“We are deeply concerned and outraged by the treatment and care offered to Alfie Evans,” the doctors wrote.

“Actions such as these have now brought the Alder Hey Hospital to worldwide attention and by extension bring our whole profession into disrepute.”

Tom Evans said this morning that his son does not need intensive care and at least should be allowed to go home.

He indicated that yesterday’s court battle, where a panel of three judges upheld previous rulings forbidding the family from taking their son for treatment in Italy,  might be the last one.

“We got rejected yesterday to go to Italy unfortunately. We could take it further but would that be the right thing to do, would there be more criticism?” Tom told reporters.

“So what we do today is we have a meeting with the doctors at Alder Hey and we now start asking to go home,” he continued.

“Alfie doesn’t need intensive care any more. Alfie is lying on the bed with one liter of oxygen going into his lungs and the rest is him. Some people say it’s a miracle, it’s not a miracle, it’s a misdiagnosis.”