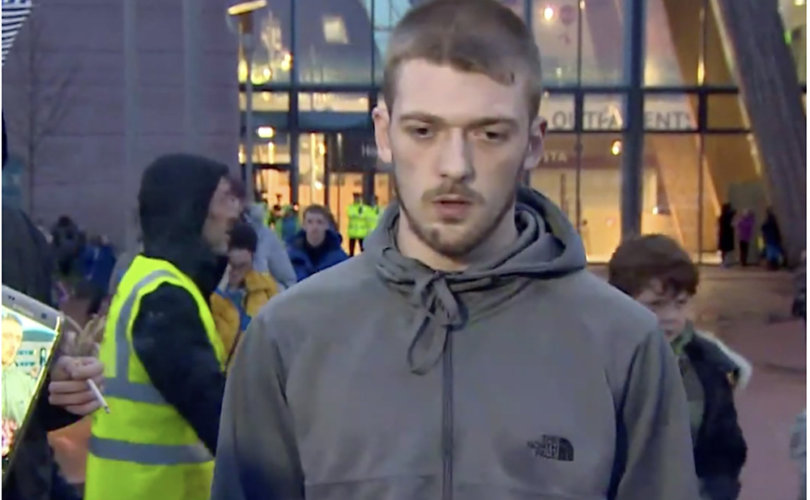 LIVERPOOL, April 24, 2018 (LifeSiteNews) – In a dramatic statement to media outside the Alder Hey hospital minutes ago, Alfie’s father Tom Evans showed resolve amidst grief and righteous anger at the hospital’s decision to refuse to allow the parents to take baby Alfie to Italy where he has been offered hospital care. An emergency appeal of the recent ruling forbidding the couple to take their son to Italy has been granted.

Exhausted and haggard, Evans said that Alfie’s 22 hours of breathing on his own after the ventilator was removed has surprised but also frustrated doctors who he says want the child dead. Evans reveals that he had to fight for six hours to get the hospital to allow Alfie hydration but they have refused to allow the child nutrition.

“They don’t want to see him come out of it, they want him to die, they want him to deteriorate in the next couple of hours so then they can say ‘oh look we told you’, but in fact in reality I stood in the court case and they told me he wouldn’t last longer than five minutes, he’s lasted 22 hours,” Evans said.

Describing his disgust with the attempt to starve his son he said: “It’s disgusting how they treating us, they're starving him, they wouldn’t do this to an animal.”

Nevertheless, Evans said he would fight with the child’s mother for their son’s life despite feeling like he is in a “jail”. “It’s disgusting but Alfie’s fighting so I’m going to remain at his bedside with his Mum all night and I’m going to fight,” Evans said.

To all those who have sent negative comments to the young parents Tom Evans says, “You haven’t knocked me down, I’m going to keep climbing the mountain.”

Evans said the claim of the hospital that it would take days to move Alfie is totally false noting that both a German and an Italian medical evacuation team were ready to transfer the child to the Bambino Gesu hospital in Rome.

Alfie Evans being ‘starved’ to death by hospital, dad claims

European Parliament president backs Alfie Evans: He has ‘all my support.’

World watches as Alfie Evans’ life hangs in the balance