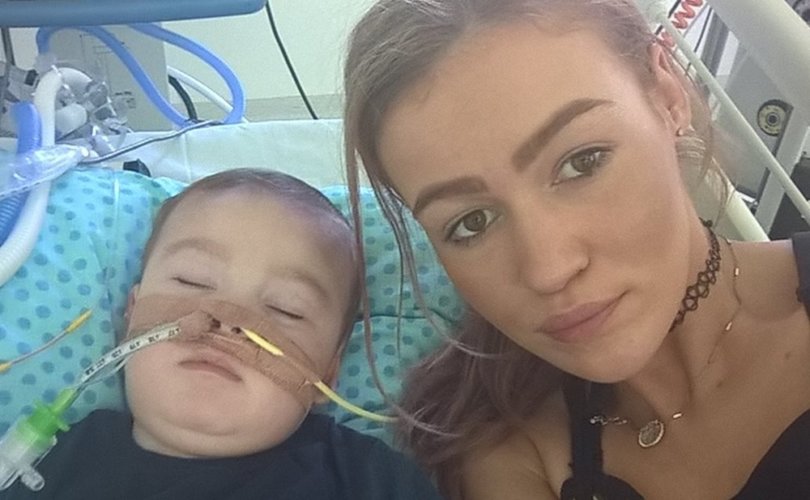 Kate James with her son Alfie Evans after he was removed from his ventilator, April 23, 2018.

LONDON, April 26, 2018 (LifeSiteNews) – A UK politician is launching a campaign today on behalf of baby Alfie Evans to change the country's law to help parents maintain control over the medical care of their children.

Called the ‘Alfie’s Law’ campaign, British Member of European Parliament Steven Woolfe along with the group “Parliament Street” hopes to stop parents being “sidelined” during the care of their sick children at government-funded hospitals.

MEP Woolfe will launch the campaign outside the Houses of Parliament at 4:30 PM today.

“Parents are being side-lined in the care of their children, in what are highly complicated moral decisions,” said a spokesman for the group. “We strongly believe it is time for a change in the law to re-empower parents to have a say in the treatment of their children. We know that MPs have the power to change this to help children and their parents in future, and call on them to address this.”

Alfie Evans, 23 months old, is in Alder Hey children’s hospital in Liverpool. A court order had him removed from his ventilator on April 23 just after 9:00 PM. Alfie defied everyone’s expectations by breathing on his own. Parents Tom and Kate have fought every step of the way since this time to secure oxygen, water, and food for their son. The toddlers’ doctors say that Alfie has an undiagnosed neurological condition that has resulted in serious and irreparable brain damage.

In a press release, Parliament Street commended that skills of British doctors while at the same time asserting parental rights.

“Whilst we absolutely recognise the skill and dedication of medical professionals in the UK, we stand by the moral rights of parents – and their children – to make their informed decisions about care and treatment,” the group said.

It cited recent cases in which British parents have been forbidden from taking their children from British hospitals for treatment in other countries, including those of Alfie Evans and Ashya King:

“The case of Ashya King saw his parents hunted across Europe after they decided to remove him from hospital and take him to the Czech Republic for proton beam therapy,” the group explained. “Ashya is in remission and doing well.”

Parliament Street is asking MPs to devote time to this campaign in the House of Parliament.

“The cases of Charlie Gard, Ashya King, and now Alfie Evans, show a dangerous trend of public bodies depriving parents and families of the right to make decisions they believe are in the best interests of their children,” Woolfe said via press release.

The MEP said that parents’ rights should not be dismissed or ignored by hospitals and courts.

“We demand a change in the law to restore the rights of parents in such decisions. All parents should be allowed an independent advocate to defend their case with the right legal and medical expertise and financial equality of arms,” Woolfe said.

“Now is the time to act, “ he concluded. “We cannot have another baby, another family, have to go through the struggle and torment the Evans family have. It’s time for Alfie’s Law.”