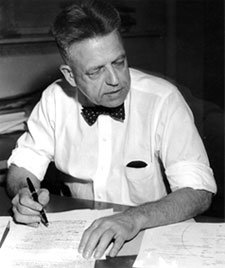 He is known as “The Father of the Sexual Revolution,” and if you’ve ever taken a university course on 20th century history, you’ll have heard his name: Alfred Kinsey.

These books revealed to a shocked and somewhat titillated population things they had never known about themselves: That between 30-45% of men had affairs, 85% of men had had sex prior to marriage, that a staggering 70% of men had slept with prostitutes, and that between 10 and 37% of men had engaged in homosexual behavior.

Much less talked about were his other disturbing “findings”—an in-depth study on the “sexual behavior” of children, as well as claims that nearly 10% of men had performed sex acts with animals (as well as 3.6% of women), and that this number rose to between 40-50% based on proximity to farms.

Got that? The Father of the Sexual Revolution was a sado-masochistic bi-sexual sex criminal who facilitated the sexual torture of infants and children.

Kinsey’s research portrayed people as amoral and sex-driven, and is credited as fundamentally changing the way our culture views sex.

But was he right?

To begin with, the integrity of much of his work has long since been called into question: among his questionable practices, Kinsey encouraged those he was working with to engage in all types of sexual activity as a form of research, misrepresented single people as married, and hugely over represented incarcerated sex criminals and prostitutes in his data.

But beyond this is the simple fact that Kinsey himself was a pervert and a sex criminal.

For example, where did he get all of his data on the “sexual behavior of children”? The answer is nothing short of chilling. Dr. Judith Reisman (whose research has since been confirmed time and time again) explained in her ground-breaking work Sex, Lies and Kinsey that Kinsey facilitated brutal sexual abuse to get his so-called research:

The man heralded with enthusiasm by mainstream publications such as Time and Life Magazine was nothing less than a monstrous facilitator of child-rape. In fact, he even went so far as to record children shrieking and thrashing in pain, passing out and convulsing as the result of the hellish abuse he was putting them through, as evidence of “orgasm”—especially for children who could not yet speak.

Kinsey’s so-called research was simply a quest to justify the fact that he himself was a deeply disturbed man. Dr. Reisman writes, “Both of Kinsey’s most recent admiring biographers confessed he was a sadistic bi/homosexual, who seduced his male students and coerced his wife, his staff and the staff’s wives to perform for and with him in illegal pornographic films made in the family attic. Kinsey and his mates, Wardell Pomeroy, Clyde Martin and Paul Gebhard, had ‘front’ Marriages that concealed their strategies to supplant what they say as a narrow pro-creational Judeo-Christian era with a promiscuous ‘anything goes’ bi/gay pedophile paradise.”

Got that? The Father of the Sexual Revolution was a sado-masochistic bi-sexual sex criminal who facilitated the sexual torture of infants and children. His goal was not just to engage in scientific research in order to see where the data took him, but rather, as one of his prominent biographers Michael Jones notes, to launch a crusade to undermine traditional sexual morality. He did so to wild success—Kinsey’s influence on sex education and law in the Western world is absolutely staggering.

Some have claimed that even though Kinsey may have been disturbed and engaged in immoral behavior, his fundamental conclusions and his data still remain accurate. This, too, proves blatantly false. According to Dr. Reisman:

1. [Dr. Kinsey’s team] ‘forced’ subjects to give the desired answers to their sex questions, 2. Secretly trashed three quarters of their research data, and 3. Based their claims about normal males on a roughly 86 percent aberrant male population including 200 sexual psychopaths, 1,400 sex offenders and hundreds each of prisoners, male prostitutes and promiscuous homosexuals. Moreover, so few normal women would talk to them that the Kinsey team labeled women who lived over a year with a man ‘married,’ reclassifying data on prostitutes and other unconventional women as “Susie Homemaker.”

It is crucially important that people become aware of the truth behind the Kinsey Reports.

Most people have no idea who Alfred Kinsey really was and how his so-called research was actually performed. I myself first heard of Alfred Kinsey in the first year of my history degree at university, where my professor announced that there “was no Sexual Revolution at all”—because the Kinsey Reports proved that people had been engaging in all sorts of bizarre and criminal sexual behaviors all along.

The real story is horrifying. It is stomach-churning. But it is also crucial that we know how, exactly, we got to this place in our culture of such sexual nihilism.