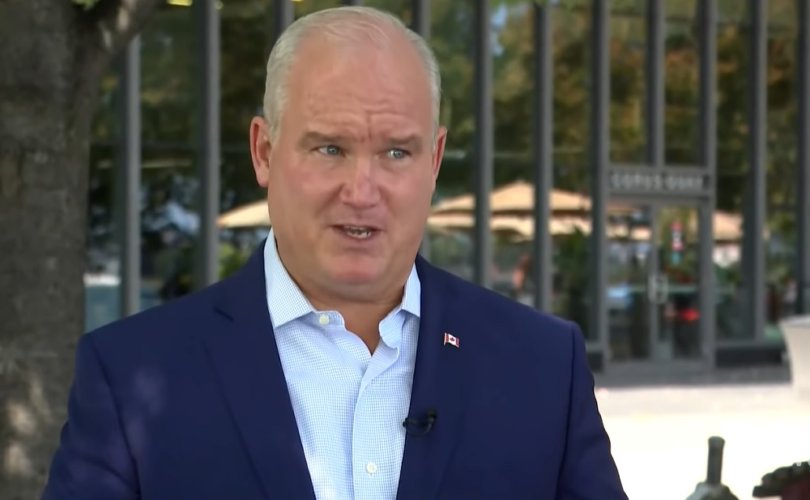 (LifeSiteNews) – The head of the Conservative Party of Canada (CPC) now says all of his MPs will “be vaccinated” with the COVID jabs despite many of them voicing concerns with jab mandates and requesting rapid testing options as an option.

“All of our members in the House of Commons will be vaccinated,” Erin O’Toole said Wednesday.  “The entire Conservative caucus will respect and abide by all the rules and all health guidance.”

The remarks from O’Toole came in light of a recent ruling by the federal government, which said it will ban democratically elected MPs and staff who have not had COVID jabs from accessing the nation’s center of democracy, the House of Commons.

The Board of Internal Economy, which is the body responsible for regulating House rules, announced the new draconian mandate last week.

“Effective Monday, November 22, 2021, individuals must be fully vaccinated against COVID-19 to be allowed within the House of Commons Precinct,” the board said in its statement.

It is not known which CPC MPs have decided not to get COVID jabs, but O’Toole said he will challenge the Board of Internal Economy mandate.

“Only the House of Commons can determine its composition and its conduct,” O’Toole said to reporters.

In early October, Prime Minister Justin Trudeau announced unprecedented COVID-19 jab mandates for all federal workers and said the un-jabbed will no longer be able to travel by air, boat, or train.

On Wednesday, the CPC caucus met in a meeting at which several MPs voiced concerns over House jab mandates.

Alberta MP Glen Motz for Medicine Hat-Cardston said that there are many “Canadians who are at risk of losing their jobs because of vaccine mandates and I think that’s a concern for many,” according to Blacklock’s reporter.

“I have not disclosed my health status to anybody. I think the whole issue is a distraction. I think Trudeau’s done a great job of dividing Canadians, period,” Motz added.

British Columbia CPC MP for Chilliwack-Hope Mark Strahl said that people “believe in choice for Canadians,” and that “where people need to be vaccinated they should have another option like rapid testing.”

Just recently, newly elected Ontario MP for Haldimand-Norfolk Dr. Leslyn Lewis took aim at  Trudeau’s push to get COVID vaccines in the arms of kids age 5-11, saying some parents do indeed “question” the safety of the injections.

Last year, Lewis told LifeSiteNews that she was opposed to mandatory COVID-19 vaccines and that she had reservations about unethically sourced COVID-19 shots made from fetal cells obtained from aborted babies decades ago.

A petition to oust O’Toole as leader of the CPC started by Bert Chen, who himself holds a seat on the CPC national council in Ontario, now has more than 5,000 signatures.

Trudeau was re-elected with a minority government on September 20. The CPC under O’Toole won only 119 seats, two fewer than in 2019.

Vander Zalm recently warned that the “end game” from the COVID virus and jab mandates seems to be a “Great Reset” that will lead to a type of global communistic order.

Vaccine passports have been enacted in all Canadian provinces even though people who have taken the experimental COVID-19 jabs can still contract and spread the disease.