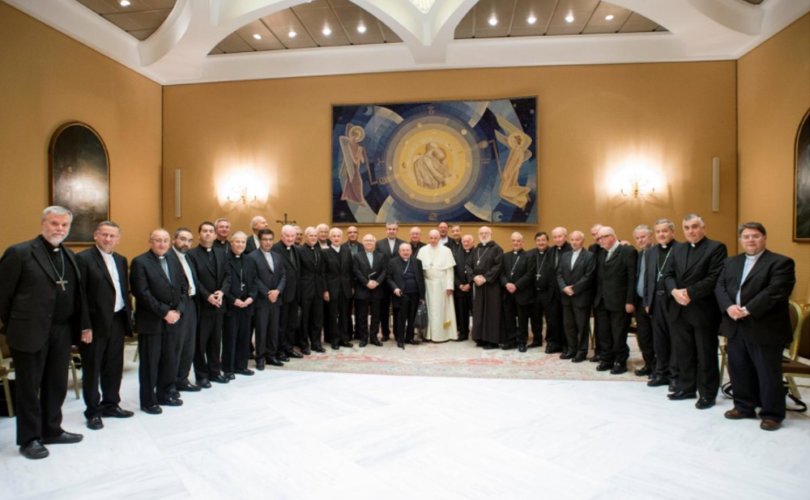 Pope Francis poses with Chilean bishops after a meeting at the Vatican, May 17, 2018. Courtesy of Vatican Media

VATICAN CITY, Italy, May 18, 2018 (LifeSiteNews) – Chile’s Catholic bishops have handed in their resignations to the Pope en masse over the Church’s sex abuse scandal there.

The Pope, who can either accept or reject the resignations, is expected to make a decision in the coming weeks.

The bishops will remain in office and members of the Chilean bishops’ conference until the Francis makes his decision.

The Pope had accused the Chilean bishops of “grave negligence” in protecting children from abusive priests in a 10-page leaked document that he had given to the bishops at the start of their recently concluded three-day meeting in Rome.

According to the pope, the bishops are guilty of destroying evidence in clerical sexual abuse cases, pressuring Church lawyers to play down accusations and transferring priests with credible abuse allegations to other dioceses.

The pontiff had called the Chilean bishops to Rome to discuss the country’s clerical sex abuse crisis.

Heads will roll, 'no one can exempt himself'

Crux is reporting that according to the Francis, heads will roll in the Chilean Church in the wake of the sex abuse scandal, but removing bishops won’t be enough.

He said the problems in the Chilean Church would not be resolved by “addressing the concrete cases and reducing them to the removal of people; this – and I say this clearly – must be done, but it’s not enough, we must go further.”

It would be “a serious omission,” the pope said, not to investigate the roots and structures that permitted the abuse, which was not only sexual, but also involved power and conscience.

It is urgent to address the situation, Francis said, and try to repair things both now and going forward “to restore justice and communion.”

“No one can exempt himself and place the problem on the shoulders of the others,” Francis wrote in the leaked document, which was published by Chile’s T13 television, the AP reporting that the Vatican confirmed it as accurate Friday.

Ties to the top

The Chilean abuse crisis has been one of a number that has touched Pope Francis personally, calling his handling of abuse claims, now and from his time in Argentina, along with his professed empathy for victims, into question.

One of the retired bishops offering Francis his resignation is Cardinal Francisco Javier Errazuriz, Archbishop Emeritus of Santiago, who has been accused of covering up cases of sex abuse. While Errazuriz now has no responsibility in the Chilean Church, he is a member of the pope’s “C9” council of cardinal advisers.

Francis indicated in a letter to the Chilean bishops Thursday that change was imminent but did not elaborate further.

He thanked them for their willingness to collaborate in “all the changes and resolutions that we will need to implement in the short-, medium-, and long-term in order to restore justice and ecclesial communion.”

He said the incidents of abuse were “serious events which have damaged the ecclesial communion and undermined the work of the Church in Chile in recent years,” that were “painful incidents which concern abuse – of minors, power, and conscience.”

The bishops thanked Francis in a statement for having listened to them “paternally and for having offered his fraternal correction” during the prior three days of meetings.

In a brief press announcement Friday, Chile’s bishops explained that they have put their positions “in the hands of the Holy Father and will leave it to him to decide freely” for each of them.

They also referenced the report on Chile’s abuse scandal produced by Maltese Archbishop Charles Scicluna and Spanish Father Jordi Bertomeu, and delivered to them by the Pope.

The report, they said, indicated a series of “absolutely reprehensible things that have happened in the Chilean Church in relation to unacceptable abuses of power, conscience and of sexual [nature], and which have led to diminishing of the prophetic vigor that characterized the Church.”

The bishops asked forgiveness for the pain caused to the abuse victims, to the Pope, to Catholics and to their country, “for their grave mistakes and omissions.”

Bishop Fernando Ramos Pérez, secretary general for the Chilean bishops’ conference, and Bishop Ignacio González, who serves on Chile’s National Council for the Prevention of Child Abuse and Accompaniment of Victims, presented the Bishops’ statement Friday.

After reading the statement in the name of all 34 Chilean bishops, both Ramos and González then read prepared remarks, according to Crux, but did not take questions from reporters.

The Chilean Church’s sex abuse crisis has been well documented for some time, with Osorno Bishop Juan Barros in the most recent headlines. Barros is accused of covering up for the sex abuse exacted by his mentor Father Fernando Karadima. A Vatican court convicted Karadima in 2011 of sexually abusing minors.

Barros and two other bishops trained by Karadima were among the 31 who offered their resignations.

The report from Scicluna and Bertomeu commissioned by the pope indicated the abuse problem in Chile does not stop with Barros and Karadima.

The 2,300-page report prompted Francis to cease defending Barros, acknowledge he’d been wrong, and summon the Chilean bishops to Rome for the meeting, along with drawing calls for bishop resignations. Francis had met with three of Karadima’s victims earlier this month, reportedly apologized on behalf of the Church and saying he’d been “part of the problem.”

Francis encountered protests during his January visit to Chile over his defense of Barros, and continued to call the accusations against Barros “calumny.”

Francis is said to have personally received an eight-page letter from one of the Chilean victims in 2015 graphically detailing the alleged abuses by Karadima and linking Barros as having witnessed them and covered up the abuse.

The alleged abuse occurred decades before Francis’s 2015 appointment of Barros to the Diocese of Osorno in southern Chile. The appointment met with significant backlash because of abuse allegations against Barros were well known.

Francis said in 2016 that the accusations against Barros had been leveled with no proof, and that “Osorno is suffering because it’s dumb …. Because it doesn’t open its heart to what God says.”

Reports have said as well that in addition to 2015 victim’s letter, the pope had been told from the time he appointed Bishop Barros that same year that it was a bad decision.

Attorney and child advocate Elizabeth Yore told Raymond Arroyo on EWTN’s The World Over in February that the Chilean bishops conference advised Francis to revoke the Barros appointment and that he’d received petitions and letters and calls, but ignored them.

Yore has reported on a number of other cases outside Chile that demonstrate “a grave disconnect between Pope Francis’ public gestures on the sexual abuse cover-up and his actions.”

She said his handling of the situation in Chile is on the par with his approach to handling abuse claims while an archbishop in Argentina.

Francis had first said that he’d not received any victim testimony on Barros, but this was later disproved after the letter’s author and members of Francis’ commission on clerical sex abuse told the AP Francis had received the letter in 2015. The report was accompanied by a photo of them delivering to letter to Boston Cardinal Sean O’Malley, who heads Francis’ abuse commission and is also one of the pope’s C9 cardinal advisors.

O’Malley had told the commission members he had delivered the affidavit to Francis personally.

While O’Malley did not comment on the AP story, he did publicly censure Francis for his statements about the accusations against Barros, saying the pope’s comments “were a source of great pain for survivors of sexual abuse by clergy or any other perpetrator,” and that they “abandon those who have suffered reprehensible criminal violations of their human dignity and relegate survivors to discredited exile.”

A curious apology for grave error

Conversely, Francis had apologized to the Chilean bishops last month in anticipation of the forthcoming meeting he had with the victims, acknowledging “grave error” on his own part.

“Regarding me, I recognize and I wish that you convey [to others], that I have fallen into grave errors of evaluation and perception of the situation, due especially to a lack of true and balanced information,” he wrote in the April 8 letter to the bishops of Chile.

The pope did not speak at the time of justice for those who had committed abuse, but instead spoke of mercy.

“These days, let us look at Christ,” Francis said. “Let us look at his life and his gestures, especially when he shows compassion and mercy to those who have erred.”

Francis had said earlier this week he thinks about when it would be time for him to step down, saying there comes a moment when the Lord tells bishops to take their leave and step down.