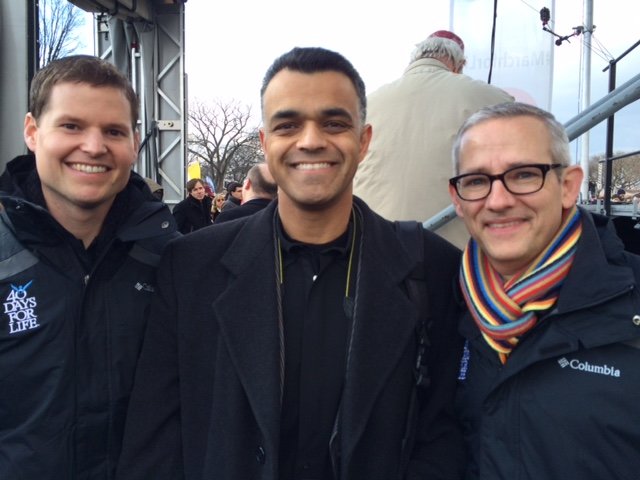 David Bereit of 40 Days for Life, on the right.

“The various moral issues we confront in our culture today are all intrinsically connected,” Bereit told LifeSiteNews at Saturday's March for Marriage. “When you look at the various factors that lead to the breakdown of nations and civilizations, they are moral factors,” Bereit said. “It's the devaluing of human life, it's the abandonment of religious belief and practice, it's immorality — the increase thereof – and it's the breakdown of the family.”

“They're all tied into this moving away from God, and America was founded as a nation with Christian principles and ideals that used to say 'In God We Trust.' And the further we've turned away from that, the more we have fallen,” he said. “I believe that with man, turning the tide in our culture is not possible, but with God, all things are possible.”

Bereit stressed that his attendance at the March for Marriage, as well as his ongoing process of discernment, was representative only of his own circumstances — not those of 40 Days for Life, which remains an abortion-focused ministry.

Bereit did not shy away from questions that are often raised about what President Barack Obama called America's “tragic” history.

“America was built on Judeo-Christians principles,“ he said. “There are still fallen people that make up our churches and our communities.”

“The question is, will people of faith and conscience turn back to God and do their very best to align themselves with the principles that formed our nation and made our nation such a great place in history?”

The third annual March for Marriage, which was organized by the National Organization for Marriage and exclusively livestreamed by LifeSiteNews, drew thousands of people, mostly minorities, just three days before what is being billed as the definitive U.S. Supreme Court hearing on the issue of same-sex “marriage.”