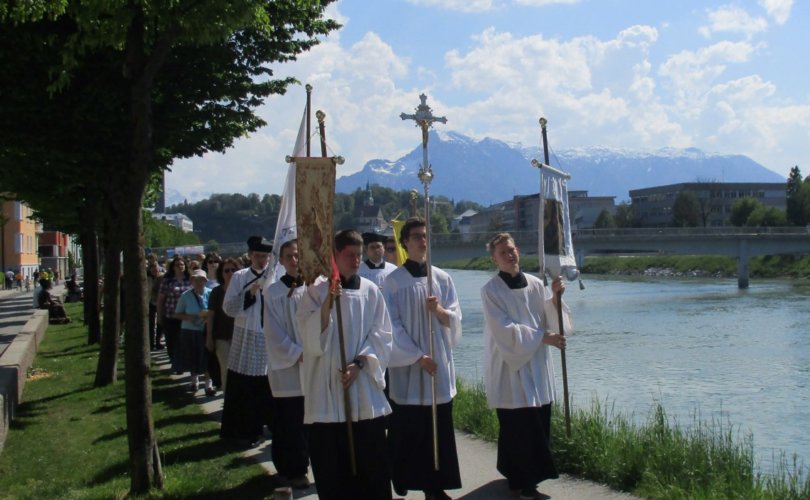 March 23, 2020 update: On March 19, the official French-speaking website of the seminary stated, “As expected, the virus did its work in the seminary, and now most priests and half of the seminarians are sick.” Priests and seminarians living in Wigratzbad were officially tested for coronavirus only on March 20. Nonetheless, a great number of them were showing symptoms at the time. After the weekend, on Monday, March 23, the seminary reported on “a marked improvement today at the seminary since the number of seriously ill patients is less than ten.”

OPFENBACH, Germany, March 20, 2020 (LifeSiteNews) – Almost all priests and roughly half of the seminarians currently at a German seminary of the Priestly Fraternity of St. Peter (FSSP), a traditionalist community of priests and seminarians, have been infected by the coronavirus.

On the evening of March 13, the seminary had first announced that a priest, who stayed at the seminary as a guest, had contracted the virus. At the time, the community, which is dedicated to the celebration of the Traditional Latin Mass, had stated that all Masses in Wigratzbad would take place without the seminarians joining.

“With the powerful help of faith, hope and charity, we do not let ourselves be discouraged. In a few days, the first healed ones will be able to take over from the newly sick, to maintain the spiritual and material life of the house,” the seminary community wrote.

Since God only allows evil for the sake of a greater good, the community expressed its confidence in the Lord “who alone is able to give meaning to our temporary existence on this earth.”

Since the reception of Holy Communion on the tongue had already been banned, the FSSP declared that only the celebrant would receive the Eucharist. The faithful were encouraged to do a spiritual communion.

On the next day, the French blog of the seminary, which has a German-speaking and a French-speaking section, clarified that the priest first infected was from Italy.

“The whole seminary has been in strict confinement for a week, because the disease spreads rapidly. A dozen priests and seminarians are showing flu-like symptoms, forcing us to completely reorganize schedules and services. Cooks, cleaners, secretaries … we have to do everything by ourselves, but everyone is generous and adapts without difficulty.”

The community is using the quarantine to meditate on the meaning of life.

“Life is short and fragile, and if one is worried about one’s health, one must be even more concerned about one’s salvation. The invisible threat of illness stimulates us to trust more in God, and to increase our prayers and penances even more,” the French blog wrote.

Earlier this week, the government prohibited gatherings of any kind in churches, meaning the public is now no longer able to participate in Mass in Wigratzbad.

This year, 90 seminarians are preparing for the priesthood in Wigratzbad. The community received 30 new seminarians last fall.

Meanwhile, 59 religious sisters in Italy have been tested positive for coronavirus.

According to a report by Catholic News Agency, 28 priests in Northern Italy have already died of coronavirus.

“Avvenire, the Italian newspaper owned by the Italian bishops conference, attributes at least 28 of these priests’ deaths to COVID-19, and also notes two additional cases: that of Fr. Guido Mortari, who died of pneumonia before he could get tested, and Fr. Giorgio Bosini, who had a serious underlying medical condition,” Courtney Mares wrote.

The vast majority of priests who died were over 70 years old. The youngest died at 54.