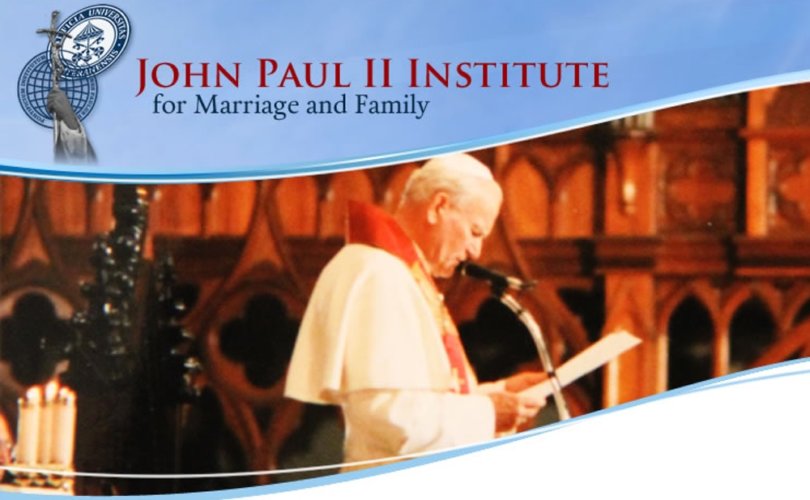 ROME, July 24, 2019 (LifeSiteNews) – In what critics see as an attack on the Catholic Church’s moral teaching, the successor of Cardinal Carlo Caffarra at the Institute on Marriage and Family founded by John Paul II has been dismissed and the institute's courses on fundamental and specialized moral theology have been eliminated.

The Italian Catholic agency, La Nuova Bussola Quotidiana, has reported that on Monday, following the approval of the new statutes of the John Paul II Pontifical Theological Institute for the Sciences of Marriage and the Family, all of the professors received a letter in which they were officially suspended, pending decisions regarding courses for the upcoming academic year and respective teachers.

Reportedly, the letter also informed professors that everyone would know their fate within a few days. While most of the professors are expected to be reconfirmed, the axe came down on the two men who most symbolize the John Paul II era: Monsignor Livio Melina and Father José Noriega.

This coup has been carried out under the direction of the Institute’s new Grand Chancellor, Archbishop Vincenzo Paglia, and is aimed at implementing Pope Francis’s 2016 decree, ‘Summa familiae cura,’ establishing a new institute. The decree, published in September 2016, was issued just days after the death of Cardinal Caffarra.

In his article for La Nuova Bussola, editor-in-chief Riccardo Cascioli highlighted the significance of the dismissal of Monsignor Livio Melina, the successor of the John Paul II Institute’s founding president, Cardinal Carlo Caffarra. In the letter he received on Monday, Msgr. Melina was informed that the teaching of fundamental moral theology has been eliminated in the new statutes, and that there was therefore no teaching position for him.

Highlighting the increasingly important role Msgr. Melina played in the expansion and growth of the JPII Institute, Cascioli notes that Melina entered the institute as a student at the time of its foundation in 1982 and, in 1985, was the first student to obtain the doctorate.

Melina also served as an official of the Congregation for the Doctrine of the Faith for six years, and successfully defended his doctoral dissertation on “Moral Conscience in St. Thomas Aquinas” with then-prefect Cardinal Josef Ratzinger in attendance.

In 1986, Msgr. Melina began teaching fundamental moral theology at the JPII Institute and in 1991 became a tenured professor, succeeding Cardinal Caffarra as chair of the department. In 2002, he was appointed vice-president of the Institute. Msgr. Melina has served as president of the John Paul II Institute since 2006, a post he held until 2016. Around the time of the two family synods and publication of Amoris Laetitia, Melina was replaced by Monsignor Pierangelo Sequeri, a musicologist and theologian.

In the article, Cascioli also notes that the decade of Msgr. Melina’s presidency was a time of “maximum expansion” for the Institute. In its last year, the institute had 516 students in Rome and 3,200 students across the world in the six centers. Research at the institute also experienced significant growth under Msgr. Melina, particularly in moral theology, through conferences, publications and international collaboration. Research in sacramental theology and the thought of John Paul II also expanded, with the Wojtyła Chair entrusted to Polish philosopher Stanislaw Grygiel, who was a great friend of the Polish Pope.

Msgr. Melina continued to teach moral theology at the Institute after his dismissal as president but “his days were clearly numbered,” Cascioli writes. “It was clear that he was the pillar that had to be knocked out to bring down the whole structure.”

“The work of destruction, begun with the [decree] of Pope Francis who created a new institute entrusted to Monsignor Vincenzo Paglia in the role of Grand Chancellor, is now in a decisive phase with the approval of the new statutes and the new curriculum,” Cascioli adds.

Archbishop Paglia and Monsignor Sequeri consulted the Institute’s professors and led them to believe that their revision to the former statutes, which they submitted in March 2019, would be taken into consideration. After keeping the professors waiting for four months without news, Archbishop Paglia published his own version of the new statutes, which he already tried to impose in June 2018 but the professors rebelled. This procedure is therefore being viewed by some as a “totalitarian imposition” of the new statutes.

The new statutes (art 5, 25-39) also give an unheard-of-amount of power to the Archbishop as Grand Chancellor. In other pontifical universities, the Grand Chancellor has more of a formal role. According to the new statutes, Paglia has power to hire and fire professors, to name the president and vice-president. It also makes him omni-present in all of the internal structures of the Institute, even though his curriculum vitae reveals he does not even hold a doctorate.

Regarding the content of the courses at the new institute: the statutes have eliminated the five Master programs that had been offered at the institute: Master in Bioethics, in Sexuality and Fertility, in Family counselling, in family pastoral work and in studies on Marriage and the Family. Doctors, nurses, lawyers, psychiatrists, psychologists, catechists and teachers had graduated from these programs.

The licentiate and doctoral programs have been retained, but there is no explicit reference in the statutes to John Paul II, the Theology of the Body, or Humanae Vitae.

Article 89 of the statutes stipulates that the period of transition for the new study-program will be three years. The new and old program will therefore co-exist for the next three years, but without the benefit of Msgr. Melina, Fr. Noriega, and possibly other orthodox and qualified faculty.