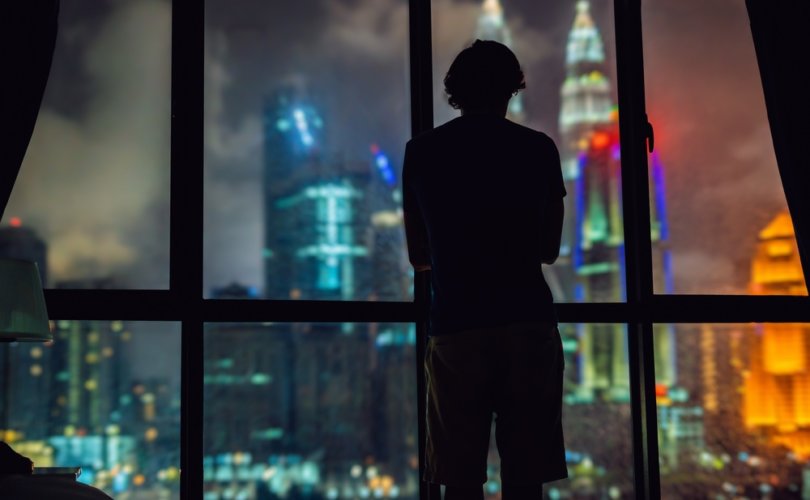 March 23, 2020, 6:00 p.m. EST: Texas has become the latest state to stop abortions due to the coronavirus crisis, deeming them not medically necessary.

Here is more information about the lockdown of Great Britain from LifeSite’s Dorothy Cummings McLean, who is based in Scotland.

The Catholic bishops of Portugal are going to consecrate their country to Jesus and Mary on March 25 (the Feast of the Annunication) at Sanctuary of Our Lady of Fatima and are inviting other prelates to do the same.

Don Giuseppe Berardelli, 72-year-old priest from Casnigo (Bergamo), has died from coronavirus covid-19, he declined a ventilator, so that it go to someone younger, someone he didn't even know. A heroic and saintly act, may he rest in peace.https://t.co/fq34kUxB9p pic.twitter.com/ZdJe7NZd29

March 23, 2020, 4:54 p.m. EST: British Prime Minister Boris Johnson has put Great Britain on a national lockdown. “Gatherings with more than two people in public, excluding people you live with, will be stopped, as will weddings, baptisms and other ceremonies,” a London news report explained. Funerals are the exception to that.

A LifeSite article with more details is forthcoming.

March 23, 2020, 3:10 p.m. EST: South African President Cyril Ramaphosa has just announced a national lockdown for 21 days. 56 million people live in South Africa. All businesses will be closed from midnight of Thursday, March, 26 through midnight of April 16.

The 2020 Tokyo Olympics are being postponed.

Ontario is shutting down all “non-essential” businesses for two weeks.

Virginia Governor Ralph Northam has ordered all schools, public and private, to remain closed for “at least” the rest of the academic year. He is also ordering a number of businesses to be closed.

“I want to be clear, essential businesses will remain open,” he insisted. “These are things like grocery stores, pharmacies, and banks. You will still be able to buy food and necessary supplies for you and your family. Restaurants can remain open for carryout, curbside, and delivery service only.”

Maryland Gov. Larry Hogan announced Monday he was ordering closed all non-essential businesses in the state, including retail stores that had been allowed to remain open.

Hogan said the additional step was necessary to “slow the spread of COVID-19 in Maryland.” The order, which takes effect at 5 p.m. today, does not include essential or critical industries as defined by the federal government: health care, law enforcement, emergency workers, food, energy, water, transportation, public works, communications, government, critical manufacturing, financial services, chemicals and defense. Restaurant carry-outs, liquor stores and daycare centers are among the businesses that can remain open.

Big box stores will remain open, but Hogan said he has asked local law enforcement to help those retailers deal with crowd control.

The tighter restrictions were imposed in part because Maryland residents, Hogan said, continue to flout social distancing guidelines and ignore a ban on mass gatherings of more than 10 people.

“Let me repeat, once again as strongly as I possibly can: if you are engaged in this activity, you are breaking the law and you are literally endangering the lives of your family friends and fellow citizens,” Hogan said.

March 23, 2020, 1:13 p.m. EST: Michigan, Indiana, Massachusetts, Ohio, and Wisconsin have asked or are about to ask citizens to stay home unless they are going to the doctor, grocery store, or pharmacy.

Beginning at 11:59 p.m. tonight, Dallas County, Texas is under a “shelter-in-place” order from a judge.

Hollywood mogul Harvey Weinstein, who was recently sentenced to 23 years for sexual assault and rape, also has the coronavirus.

A March 17 article from the New York Daily News says that New York Metropolitan Transportation Authority employees have been given letters authorizing them to travel. These letters can be shown to law enforcement, the article says, in the event that most citizens are restricted from traveling.

LifeSiteNews is unaware of any Catholic diocese in the United States that offered public Masses this weekend.

March 21, 2020, 6:46 p.m. EST: The first person known to have died of the coronavirus in Washington, D.C. is a Franciscan friar, Br. John-Sebastian Laird-Hammond, OFM. He lived at the Franciscan Monastery of the Holy Land, a popular Catholic pilgrimage site in the nation’s capital, just a short distance from the Basilica of the National Shrine of the Immaculate Conception. He was 59 and had been suffering from leukemia.

Today, nearly one billion people – roughly one seventh of the world’s population – were confined at home, AFP News reported.

The coronavirus pandemic took an increasingly bleak toll Saturday in the U.S. and Europe, producing staggering caseloads in New York and Italy and setting off a desperate scramble to set up thousands of additional hospital beds as the disease notched another grim advance.

“Everything that can be done is being done,” New York Gov. Andrew Cuomo said, adding, “We are literally scouring the globe looking for medical supplies.”

Across the world, streets, squares and highways in major cities were deserted as curfews and lockdowns multiplied to try to stop the spread of COVID-19. In the U.S., New Jersey and St. Louis were added to a growing list of areas where residents were ordered to stay home. Health care workers from Oklahoma City to Minneapolis sought donations of protective equipment. Staff at a Detroit hospital began creating homemade face masks for workers. Even rural hospitals were strained as people increasingly felt the pandemic closing in.

March 20, 2020 (LifeSiteNews) – The coronavirus crisis continues to rage around the world.

California Governor Gavin Newsom issued a “statewide order” forcing the nearly 40 million people in the Golden State to stay at home and only leave for essential or medical business. It is in effect until further notice. The left-wing governor told his constituents, “You can still take your kids outside, practicing common sense and social distancing. You can still walk your dog.”

Similar measures are being undertaken in England. The Guardian reports:

Boris Johnson took the extraordinary step of ordering pubs, clubs and restaurants across the UK to close on Friday, and announced an unprecedented wage-support scheme to try to prevent a consequent tsunami of job losses.

Announcing the decision in the fight against the coronavirus, the prime minister said he realised that it went against what he called “the inalienable free-born right of people born in England to go to the pub”.

Cardinal Robert Sarah, Prefect of the Congregation for Divine Worship, has declared that Easter Masses “cannot be transferred to another time,” because of the coronavirus. The annual Chrism Mass, usually celebrated on the Tuesday of Holy Week, may, however, be postponed by bishops to a later date. Expressions of popular piety and processions common to Holy Week and the Easter Triduum may also take place later in the year, depending on the judgement of local ordinaries. The cardinal suggested September 14 and 15.

All public Masses in New Zealand are cancelled.

Communist China’s relationship with the pro-abortion World Health Organization is under scrutiny.

A London hospital declared a critical incident after its intensive care unit was overwhelmed with coronavirus patients.

Northwick Park Hospital in Harrow, part of the London North West University Healthcare Trust, sent a message to staff on Thursday night warning that it had run out of critical-care space.

The hospital said it called on neighbouring hospitals for help to take on additional patients. The incident was stood down after 24 hours.

Six patients who have died at the hospital tested positive for the coronavirus infection.

It comes as the NHS rushes to find an extra 30,000 bed spaces in order to establish makeshift intensive-care units ahead of an expected surge in coronavirus cases over the coming weeks.

Bishop Athanasius Schneider, one of the world’s foremost defenders of Catholic orthodoxy, has written a scathing examination of the situation in which Catholics around the world have found themselves, comparing it to life in the Soviet Union and Rome in the first centuries.

Millions of Catholics in the so-called free Western world will, in the coming weeks or even months, and especially during Holy Week and Easter, the culmination of the entire liturgical year, be deprived of any public acts of worship due to both civic and ecclesiastical reaction to the outbreak of Coronavirus (COVID-19). The most painful and distressing of these is the deprivation of Holy Mass and sacramental Holy Communion.

The current atmosphere of an almost planetary panic is continuously fueled by the universally proclaimed “dogma” of the new coronavirus pandemic. The drastic and disproportionate security measures with the denial of fundamental human rights of freedom of movement, freedom of assembly, and freedom of opinion appear almost globally orchestrated along a precise plan. Thus, the entire human race becomes a kind of prisoner of a world “sanitary dictatorship,” which for its part also reveals itself as a political dictatorship.

St. Andrew Apostle, a parish in the Archdiocese of Washington, hosted “drive-in Eucharistic Adoration” with a five-foot monstrance and 150 cars in its parking lot. One complaint of some Catholics in the Washington, D.C. area and the neighboring Diocese of Arlington is the lack of information about which parishes still have Confession or Adoration and when special events like this take place.

Dane County, Wisconsin, home to the left-wing stronghold of Madison, has just launched an online tool for the express purpose of reporting to the authorities citizens who gather in groups of 10 or more.

Senators Kelly Loeffler (R-GA), Dianne Feinstein (D-CA), Richard Burr (R-NC), and James Inhofe (R-OK) all dumped millions of dollars of stocks after being briefed on the coronavirus, it has been revealed. Loeffler’s husband is the Chairman of the New York Stock Exchange.

Army Times reports that National Guard “activations [are] expected to rapidly increase” and “could be used for law enforcement.”

Pope Francis has granted special indulgences to coronavirus sufferers, the details of which can be read here.

A Texas abortionist is self-quarantining himself and worried fewer babies will be killed because of it.

Monaco’s Prince Albert II has the coronavirus, as does Catholic University of America president John Garvey.

Finally, I’ve written a blog post about nine pro-life things you can do while stuck at home because of the coronavirus.