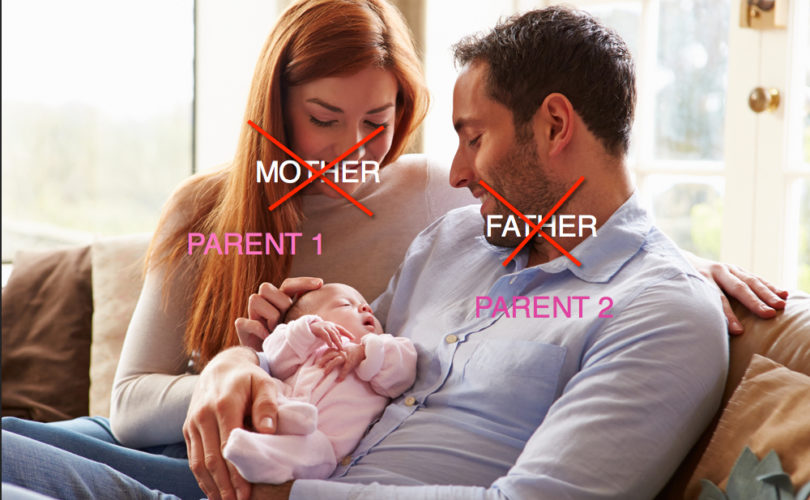 TORONTO, September 25, 2015 (LifeSiteNews) – Ontario MPPs appear ready to push the province even closer to the gender-free misutopia promised in its radical new sex education curriculum, as all parties approved a motion to remove all references to “mothers” and “fathers” from government documents. This was to save the feelings of same-sex, transgender, and, presumably, polygamous, test-tube and other kinds of parents.

“It’s trying to break down the family,” protested Gwen Landolt, vice president of REAL Women of Canada. “It’s clearly in accordance with what our Lesbian Premier Kathleen Wynne wants to do with the sex education curriculum.”

The curriculum, implemented this September, has generated a popular, non-partisan opposition among immigrant and other families in the Greater Toronto Area that has been spreading into other parts of Ontario. The Wynne curriculum introduces sexual issues to children in the early grades and normalizes aberrant sexual relations and “gender fluidity” throughout all grades.

The non-binding motion came from Liberal backbench MPP Glenn Thibeault. It called for the government to “replace gendered terminology with gender-neutral and inclusive language on all government forms as they are updated, amended, created, or replaced, in order to reflect the diverse nature of our province, including, but not limited to replacing the terms ‘mother’ or ‘father’ with terms such as ‘parent’ or ‘guardian’ to better recognize the rights of LGBTQ parents, and others.”

Thibeault said there were 10,000 forms requiring parents to identify themselves, and many of them still required this to be done as fathers and mothers. He spoke of a single mother who had complained to him about one such form.  “It was a reminder that she was a single parent and that being a single parent makes her feel different. It’s a reminder to single parents, to divorced parents, or queer or transgender parents that they and the way they are raising their child is not what is considered to be normal. But it is, and that is why I don’t think that was okay.”

Both the opposition parties supported the motion. The NDP’s critic on transgender issues, Cheri DiNovo, promised to follow it up soon with a “parents rights’ bill that would enable same-sex parents to register as such on their test-tube-conceived offspring’s birth certificate. Fellow NDPer Jennifer French, added that families come in all shapes and sizes. “It isn’t the gender of care, it is the nature of it,” she said.

There’s the rub for David Blankenhorn, head of the Washington D.C.-based Institute for American Values. “If it were just about making government forms more accessible to all kinds of people in their diversity, then I have nothing against I,” he told LifeSite. “What I worry about is erasing the notion of mothers and fathers. The evidence from social science is in. The best way for a child to be raised is by its biological mother and father.”

The IAV’s own research survey titled “Family Structure and Children’s Educational Outcomes” reveals that the child raised by both natural parents shows up already well ahead in pre-school. “Three- and four-year-old children growing up with their own married parents (or in an “intact” family) are three times less likely than those in any other family structure to experience emotional or behavioral problems such as attention deficit disorder,” it reports. Fourth grade students living in intact families “score higher on reading comprehension, compared to students living in stepfamilies, with single mothers, and in other types of families.”

A Child Trends study done in 2011 showed that children living in intact families with married biological parents had fewest behavior problems in school, followed by those with unmarried biological parents. Children in step-families had far more problems and worst were those in unmarried step-families, usually the biological mother with a boyfriend.  So politically incorrect were these findings, they had to be reported first by the IAV’s redoubtable Elizabeth Marquardt.

Even less “PC” was the study using Canada Census data done by Simon Fraser University economist Doug Allen showing that children being raised by same-sex couples were 35 % less likely to graduate from high school than those raised by heterosexual families.

All of which prompts REAL Women’s Landolt to dismiss the justifications offered for Thibeault’s motion as “politically correct nonsense.” The truth, she added, “is well known. In every respect the best way to raise children is with both biological parents.”

Andre Schutten of the Ottawa-based Association for Reformed Political Action, told LifeSite that neutralization of documents was part of “social experiment that is telling our society and our kids that Moms and Dads don’t matter. They are optional and there will be no consequences to their elimination.”

But this is wrong, Schutten insists. “Most religions worldwide and the social science evidence shows that a child does best with a mother and a father. This doesn’t mean a single mother can’t be a good Mom, but it does mean society and governments shouldn’t be trying to undermine the best family. They should be encouraging and supporting it.”

Gender identity and expression are fully embraced by Ontario teachers

Pope: Marriage between man and woman is threatened by gender ideology