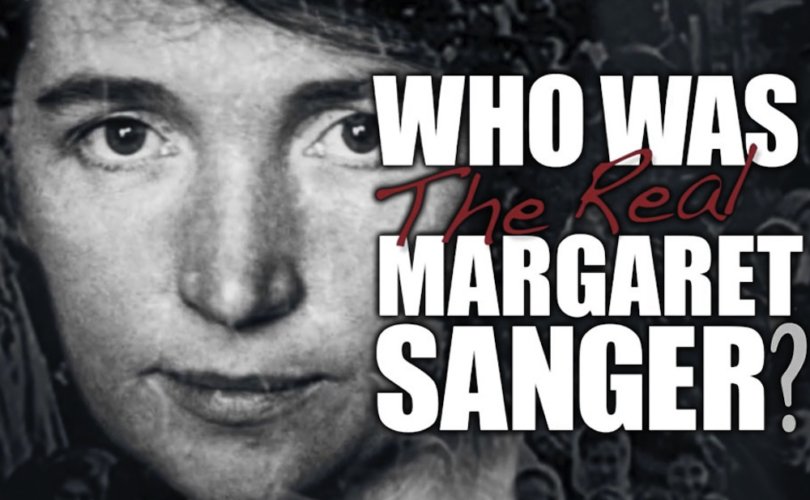 October 3, 2016 (LifeSiteNews) — While Margaret Sanger is hailed as a feminist heroine as part of Planned Parenthood’s 100th anniversary celebrations, the American Life League paints a different picture of the abortion provider’s founder in a new video series.

Reminding Americans of Sanger’s close connection with the racist eugenics movement that inspired Nazi dictator Adolf Hitler is just one of the lessons in ALL’s  Who Was the Real Margaret Sanger?

“Margaret Sanger was a racist and eugenicist who believed that all women, but especially poor women, should limit their families to only two or three children,” ALL said in a promotional announcement. ALL’s Mary Flores added, “Planned Parenthood was never a benevolent movement aimed at lifting women out of poverty. Right from its foundation, it was aimed at the children of the poor.”

But in addition, Flores notes, “Sanger wanted to separate sex from children.” And this idea, the ALL video package explains and explores, has had a profound effect on today’s American culture.

The ALL package, which comprises three short videos (five to eight minutes each) and accompanying discussion and lesson materials is designed for high school but is usable by community and church groups. Black pastors are especially enthusiastic, Flores reports.

Defenders of Sanger, even Christians, claim she wanted to alleviate poverty but ignore how deeply committed to Darwinist notions of eliminating, not poverty, but those predisposed to poverty — the genetically defective dark races and the mental “defectives” accidentally produced by white parents.

“Birth control itself,” she wrote, “often denounced as a violation of natural law, is nothing more or less than the facilitation of the process of weeding out the unfit, of preventing the birth of defectives or of those who will become defective.”

Elsewhere, Sanger denounces charity itself. “Organized charity itself is the symptom of a malignant social disease. … Instead of decreasing and aiming to eliminate the stocks [of people] that are most detrimental to the future of the race and the world, it tends to render them to a menacing degree dominant.”

Inspired by Sanger, the Nazis legalized abortion — just for Jews.

ALL’s package sells for as low as $29.95 and can presented as part of a single-day workshop or in three school lessons.

“Who Was the Real Margaret Sanger? shows students what Planned Parenthood doesn't want them to see — that Margaret Sanger was a racist and eugenicist who believed that all women, but especially poor women, should limit their families to only two or three children. With Planned Parenthood's 100th anniversary … in October, now is the time to educate ourselves and the next generation. We want to prevent today's student from becoming tomorrow's Margaret Sanger.”