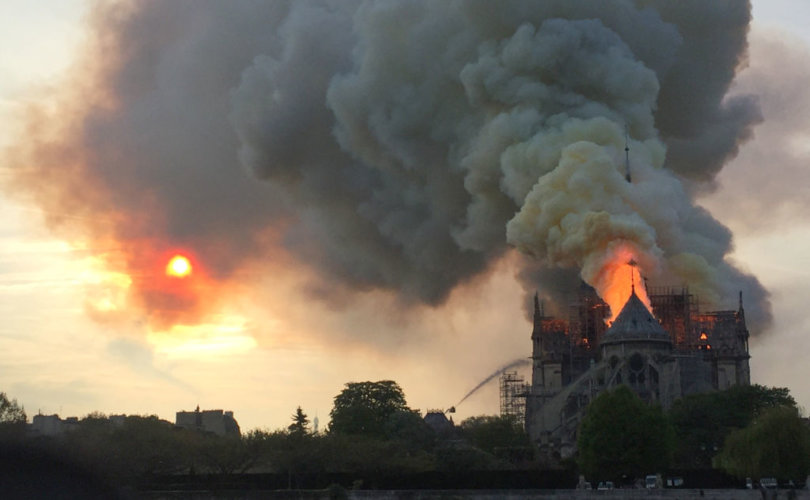 April 18, 2019 (LifeSiteNews) – Hundreds of hate messages were published on social media last Monday night while the devastating fire that destroyed the roof of Notre Dame cathedral in Paris was still raging. Many of these messages were posted on accounts bearing visibly Islamic names, under the hashtag #NotreDame.

Complaints will be filed by the AGRIF (Alliance against racism and for the respect of French and Christian identity)*, an official defense league that has the capacity to initiate penal prosecution in such matters.

A young Algerian woman, Lamia Bentebba – or at least an apparently genuine Twitter account bearing that name – posted a shot from an old film showing the cathedral of Paris with the caption: “that Notre Dame will be gone one day.” Later she retweeted a comment in English: “imagine being sadder about a f**king building than the millions of brown people killed by colonialism and imperialism yt people showing yet again their lack of situational awareness or any basis level of empathy.”

Yxnis wrote: “The karma is too hot, they made fun of Mecca, now it’s Notre Dame that’s burning.” He was referring to an adolescent, Hugo, 15, who received insults and death threats on social media for having compared the Kaaba stone in Mecca to a TV game, “In Ze Boite” (“In the Box”).

These are but a few examples of waves of insults and “likes” that make clear the rift between the historical Catholic population of France and a growing population of Islamic migrants.

Political revenge, religious hatred, reference to poetic justice, and plain arrogance in announcing a hoped-for domination of France by Islam dictated the words of these messages. They seemed too numerous and were made by too many verified users to be considered some kind of hoax.

Several racist tweets by Hafsa Askar, a college student in Amiens who is also a member of the national board of the leftwing students’ union UNEF were completely traceable because of her public position.

At 8 p.m. on Monday, she wrote: “I don’t care about Notre Dame de Paris because I don’t care about the history of France, I don’t know, just quote me,” and: “So the people are even moved to tears for some pieces of wood… Wallah you like French identity too much while we don’t give a sh… objectively it’s just your crazy thing, you whiteys.”

Few of her contacts disagreed. One tweeted back: “The only church that illuminates is a burning church.” This quote from Spanish anarchist Buenaventura Durruti in 1936 is a standard slogan of anti-clericals. France’s churches have been tagged, burgled, desecrated, and targeted by arson in unheard of proportions over the last 18 months, especially in February and April of this year. Those words have repeatedly been written on church walls and doors, for instance, here.

It is only under the pressure of thousands of indignant web users that the UNEF finally disassociated itself from Hafsa Askar’s words and her twitter account is no longer public.

On Wednesday the AGRIF tasked its coordinating lawyer, Jérôme Triomphe – also the counsel of the family of Vincent Lambert, France’s Terri Schiavo – with filing a penal complaint against Hafsa Askar.

Upon the initiative of its president, Bernard Antony, the AGRIF has also seized the public prosecutor of Paris in order to obtain the identification and trial of authors of the Durruti tags on many walls of France under the qualification “incitement to crime.”

Bernard Antony has a special link with the Notre Dame Cathedral: he was one of the founders of the yearly traditional pilgrimage from Notre Dame of Paris to Notre Dame of Chartres at Pentecost, in 1983. In those difficult days for the traditional liturgy, the pilgrims were shut out of the cathedrals and masses were said in front of the closed doors of the sanctuaries.

Nowadays, young (and less young) people in their thousands join the 70 mile walk from Paris to Chartres and traditional masses are offered within both cathedrals. With Notre Dame so badly hurt, and insult having been added to injury by those who reject the history and religion of France, another solution will have to be found for the departure. Organizers are expecting a record turn out.

*Disclaimer: Jeanne Smits is one of the vice-presidents of the AGRIF.