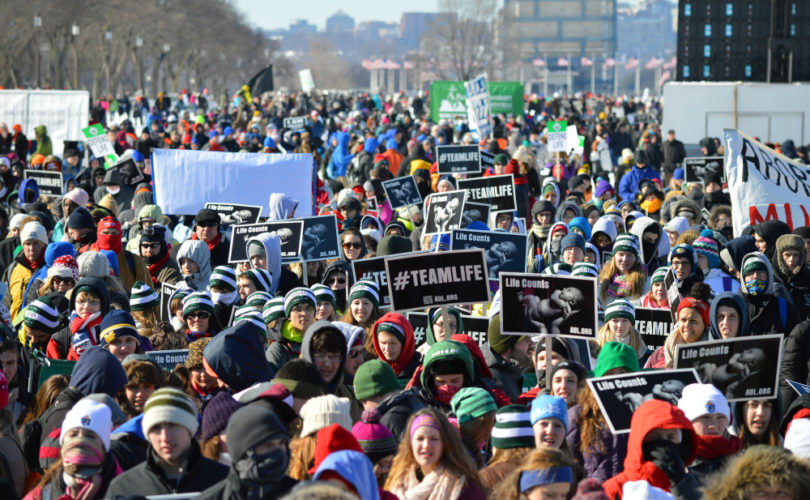 January 21, 2016 (LifeSiteNews) – The Alliance for Fair Coverage of Life Issues launched its #CoverTheMarch campaign today demanding the media cover this year’s March for Life and cover it fairly. The annual event held in Washington, D.C. draws hundreds of thousands of peaceful participants from all over the country. This year’s March for Life marks the 43rdanniversary of Roe v. Wade, the Supreme Court decision that legalized abortion on demand.

The Alliance for Fair Coverage of Life Issues, a coalition of 17 pro-life organizations and two members of Congress along with the Media Research Center, formed in response to the consistently poor coverage media outlets have given to important, newsworthy life issues. Last year’s censorship of the March for Life (which received only 15 seconds of coverage from the networks) revealed the media’s contempt for those who don’t share their left-wing social agenda. Add to this the media outlets’ paltry and irresponsible reporting this past summer regarding the Center for Medical Progress’s undercover videos of Planned Parenthood, and the impetus for the creation of the Alliance is clear. Pro-life Americans will no longer allow the media to ignore issues that impact the most vulnerable in our society: pre-born babies.

“After last year’s media blackout of the March for Life, the networks owe it to their viewers to meaningfully and accurately cover Friday’s march. The media have covered all manner of protests in our nation’s capital no matter how large or small, but they refuse to cover hundreds of thousands of peaceful marchers advocating for the unborn. We will raise our voices on behalf of these precious children and let the media know that they must cover the march. If the media want to retain any shred of credibility, they will give the March for Life and other life issues the full and fair coverage they deserve.”

John-Henry Westen, Editor-in-Chief of LifeSiteNews and a member of the Executive Committee of the Canadian March for Life:

“For decades, the mainstream media has spiked coverage of America's biggest annual protest. Pandas and football controversies receive round-the-clock coverage, but hundreds of thousands of young people bearing the cold with joy and enthusiasm are downplayed or flatly ignored. As Congress and states continue to investigate Planned Parenthood's many illegal practices, the life movement is demanding fair and balanced treatment by the same press that has enthusiastically covered smaller protests like Million Student March and Black Lives Matter.”

“Every year, hundreds of thousands of people attend the annual March for Life in Washington, D.C. And every year, the mainstream media shamelessly ignores it. Enough is enough. It's time for reporters to do their jobs, report the news, and give the March for Life the equal and fair coverage that an event of its size, magnitude, and importance deserves.”

“I'll never forget the 2013 March for Life. Nearly all of mainstream media ignored hundreds of thousands braving freezing temperatures to declare that every human life was worth saving. The same MSM plastered their front pages, however, with Newark Mayor Cory Booker (D-NJ) saving a freezing dog. Priorities.”

“Every year, hundreds of thousands March for Life, not just in Washington D.C., but all over the country. And every year, the liberal media reveal their pro-abortion politics by not reporting on the March for Life. No wonder the media's ratings are in the toilet.”

“The liberal national media routinely dismiss one of the largest public demonstrations that takes place in America, the annual March for Life to protest the anniversary of the Roe v. Wade Supreme Court decision. Unsurprisingly, polls consistently show that Americans distrust the national media to provide them with fair and objective coverage of the news. Americans will continue to reject the bias of the liberal national media until the media provides them with all the facts and stops telling them what to think.”

“Perhaps the mainstream media stays away from the March for Life because of a perception that it is old news, but nothing could be further from the truth. Last year the Silent No More Awareness Campaign unveiled the Shockwaves initiative to bring attention to the wider circle of victims of abortion, and this year that effort will expand. Every year there is breaking news at the March for Life, and Americans who depend on the media deserve to know it.”

“The liberal media's consistent censorship of the annual March for Life is nothing short of shameful.  We will hold the media accountable if they continue to ignore the hundreds of thousands of pro-life advocates who march for the unborn every year.”

Kristan Hawkins, President of Students for Life of America:

“It is our hope that the mainstream media will show Americans, the majority of whom believe that abortion is immoral and should be restricted, the enormous grassroots movement that is the March for Life. Americans need to see that a generation is rising up who wants to make abortion unthinkable and help women facing unplanned pregnancies.”

“Thousands of pro-life school and college students join the March for Life every year, often traveling hundreds of miles in buses to declare themselves the pro-life generation.  Any objective reporter would see the news value in this and be on the ground, getting interviews and reporting on this extraordinary youth activism for ‘traditional’ values.”

“The Family Policy Institute of Washington is proud to be joining the Alliance for Fair Coverage of Life Issues and the #CoverTheMarch campaign.  Issues of life and conscience have been pushed to the edge year after year and, as a result, the voiceless never have a voice.  We are grateful to partner with groups across the nation to bring these issues back into the discussion!”

“There is no excuse for the paucity of coverage afforded the annual March for Life. This event not only draws a huge crowd every year—in the bitter cold—it attracts a wide diversity of people, from every age group. It is time that the media gave the March for Life the coverage it deserves.”

“The March for Life is a special event that is unique in modern-day American politics. There is no other consistent annual event on any political issue where more than half a million people gather in the nation’s capital to express their views. That’s because the travesty of the denial of human rights of 57 million unborn children is so monumentally important to so many Americans – and that deserves appropriate news coverage. Because the media steadfastly refuses to cover the March for Life and other key pro-life issues, or to cover them without pro-abortion bias, we created LifeNews to reach Americans with the truth. That media bias has resulted in more than 1 million people reading pro-life news at LifeNews.com each and every week.”

“It's almost a dereliction of duty how the MSM virtually ignores upward of 50K peaceful demonstrators blocking San Francisco's main thoroughfare. They may not want to acknowledge that the Walk for Life West coast is the fastest growing movement among young people in the San Francisco Bay Area, but you'd think they'd at least let frustrated motorist know they'll be stuck in traffic for a few hours longer than expected.”

“While nearly every media outlet in the country sends reporters and cameras to the March for Life, the editors and news directors seem to find the fact that tens of thousands of Americans, young and old, walking to the Supreme Court in prayerful and peaceful concern for the innocent, unborn, is not deserving of front page coverage or top of the broadcast news is mystifying. We welcome all the media to tell the true story of this march, that far surpasses any other event in Washington and to reflect truthfully about this movement and the wonderful people who come from the around the country to make their voices heard in the nation’s capital.”

“Young America’s Foundation is happy to support this alliance in its important mission of holding the media accountable for its failure to provide fair coverage of the millions of Americans who actively support every American’s right to life.”

“Few things damage the credibility of major media outlets than being caught ignoring major events, even when the events are on their very doorstep. Yet this happens almost every year with the March for Life, when hundreds of thousands of young women and men from every walk of life brave terrible weather in the nation’s capital to march in defense of our unborn brothers and sisters. We hope the media will finally give this event its due, even if it is inconvenient for the Planned Parenthood-led narrative about abortion being widely supported by and empowering for women.”