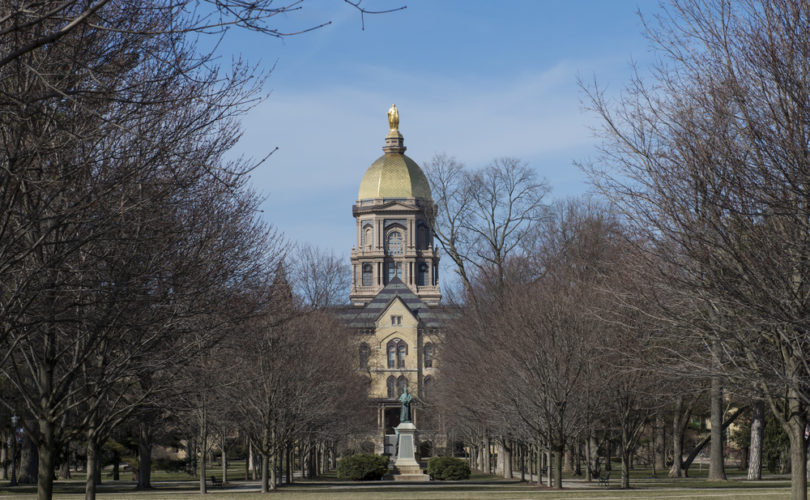 SOUTH BEND, Indiana, April 12, 2019 (LifeSiteNews) — An alumna and mother of a student of Notre Dame is asking university president Rev. John Jenkins in a letter to grant a student petition for a campus-wide pornography filter for the university’s WiFi internet service.

Molly Kraker is a graduate of the Catholic university in South Bend, Indiana, who also identifies herself as the mother of a current student and wife of an alumnus. She refers to a petition circulated by Notre Dame student James Martinson, who wants the university to install a filter making 200 pornography sites inaccessible on Notre Dame Wi-Fi networks.

“In our over-sexualized culture, men and women are bombarded with pornographic material. A significant number of male and female students are imploring you to take a stand and install a filter to block online pornography on Our Lady’s campus. These brave students are asking you to guide them in their quest to lead chaste lives,” Kraker states in her letter. (Read the full letter below, courtesy of the Sycamore Trust.)

“We are called to live out our faith radically in a world awash in sin and selfishness and you are uniquely placed to help show young Catholic students how to do exactly that. To be truly obedient to our beautiful faith and embrace it fully, counter-culturally, boldly … though the odds be great or small,” she writes.

According to Kraker’s letter, Vice President of Communications Paul Browne responded to the students’ call for a pornography filter: “God’s given us the choice of whether to be sinners or not.” As for Rev. Jenkins, he wrote to Enough is Enough: “Although we do not believe a mandatory filter is the best solution for us, we are taking steps to encourage students and others to adopt filters voluntarily. Thank you for your thoughts on this matter.”

According to the Catechism of the Catholic Church, “Pornography consists in removing real or simulated sexual acts from the intimacy of the partners, in order to display them deliberately to third parties. It offends against chastity because it perverts the conjugal act, the intimate giving of spouses to each other. It does grave injury to the dignity of its participants (actors, vendors, the public), since each one becomes an object of base pleasure and illicit profit for others. It immerses all who are involved in the illusion of a fantasy world. It is a grave offense. Civil authorities should prevent the production and distribution of pornographic materials.”

I am writing as a concerned mother of a current Notre Dame student and an alumna from the Class of 1990 who also happens to be married to an ND grad from that same class. In addition, my sister graduated in the Class of 1991 and she is also the mother of a current ND student. What happens on Our Lady’s campus matters to me. It matters to my family. I have written you on many occasions when the university — under your leadership — has sadly declined to use its influence as one of this nation’s finest Catholic institutions to defend our faith and the Church’s teaching and instead sided with worldly acclaim. All of my entreaties have thus far fallen on deaf ears and I have no reason to believe this one will prove productive. My conscience demands I write to you, nonetheless.

We are called to live out our faith radically in a world awash in sin and selfishness and you are uniquely placed to help show young Catholic students how to do exactly that. To be truly obedient to our beautiful faith and embrace it fully, counter-culturally, boldly — what though the odds be great or small.

In our over-sexualized culture, men and women are bombarded with pornographic material. A significant number of male and female students are imploring you to take a stand and install a filter to block online pornography on Our Lady’s campus. These brave students are asking you to guide them in their quest to lead chaste lives. With the results of the most recent “Sexual Climate” survey showing 78 rapes or about 9 rapes on average per month and about 50 other sexual assaults per month, clearly the misogynistic porn culture is moving from the laptop to the campus party with regularity. I want my daughter and my niece to be safe on campus, not dismissively told by Vice President of Communications, Paul Browne, that “God’s given us the choice of whether to be sinners or not.” Aren’t we as responsible adults called to assist our young people in seeking the good? Instead, Mr. Browne would have us turn a blind eye to what the Catechism calls a “grave offense,” as pornography does “grave injury to the dignity of its participants” and “immerses all who are involved in the illusion of a fantasy world.”

The University of Notre Dame MUST do more than hide behind unenforced, widely disregarded rules. The University has no problem virtue signaling to the “woke” post modernists about the evils of Columbus and is quite comfortable taking action to cover murals that date back to the 1880s, but can’t find the time to care about the virtue of its current students.

On the topic of the Columbus murals, I was embarrassed and appalled by your decision to cover them. Was Columbus a flawed man? Did egregious things happen to the indigenous people living in the Americas following the arrival of Europeans? Yes. But we cannot judge the man by solely looking at him and his actions through the prism of our 21st century world.

I cannot understand how covering these murals accomplishes your declared goal to “not erase anything, but tell the fullest story.” Tucking away high resolution pictures of the murals in some hidden corner of campus simply cannot tell “the fullest story.” Cloaking the murals simply empowers those addicted to outrage who continually preach progress while demanding society keep its collective head pointed perpetually at past wrongs to further their mindset of victimization while seeking vengeance under the guise of justice.

You act as if the presence of Catholic Europeans did nothing but lead to “exploitation, expropriation of land, repression of vibrant cultures, enslavement, and new diseases causing epidemics that killed millions.” Certainly, you aren’t implying that the early European explorers with their limited understanding of microbiology, sought to kill the native populations through germ warfare. And perhaps you could look to the indigenous people living under the horrors of Aztec rule to see if the Europeans provided a welcome aid as they sought to remove the constant threat presented by Moctezuma’s bloodthirsty human sacrifices.

I fully support the work of the Sycamore Trust as it strives to restore the University of Notre Dame’s authentic Catholic identity. I pray that you will employ the supernatural grace bestowed upon you during your ordination and do just that. The students of Our Lady’s University deserve nothing less.