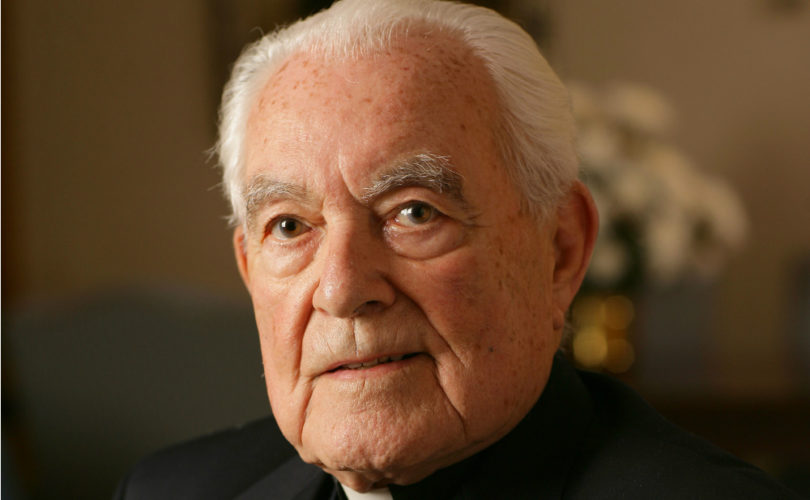 In an interview with LifeSiteNews, notable attorney William Dempsey, who leads the Sycamore Trust, a group of Notre Dame alumni, said that while Hesburgh’s efforts to pull Notre Dame out of the “Catholic ghetto” to rank alongside the Ivy League have benefited the university, Notre Dame “does not even come close” to fulfilling the basic definition of a Catholic institution.

Notre Dame no longer meets the definition of a Catholic institution, said Dempsey, for failing to have committed Catholics as a majority of its faculty. While a desire to broaden the scope of the university may have been admirable, Dempsey faulted Fr. Hesburgh for not setting up safeguards to prevent the deterioration of the university’s Catholic identity when he added non-Catholic faculty.

“That’s a real indictment of the Catholic identity of Notre Dame University,” Dempsey told LifeSiteNews, “and exactly parallels about what [Fr. Wilson D.] Miscamble” — the author of the just released American Priest: The Ambitious Life and Conflicted Legacy of Notre Dame’s Father Ted Hesburgh — “said was Hesburgh’s responsibility in that respect.”

Hesburgh was a leader in the secularization of Catholic campuses across the United States. He urged the Congregation of Holy Cross to relinquish control of the university to a lay board of trustees and convinced the leaders of top Catholic universities to sign the so-called Land O’ Lakes statement that defined the Catholic university as being free of outside institutional control. Ex Corde Ecclesiae, a 1990 document laying out the criteria necessary to qualify as a Catholic school, has been seen by some as the Vatican’s riposte to the American Catholic declaration of independence in academic matters.

In the interview with LifeSiteNews, Dempsey acknowledged Hesburgh’s personal piety, daily celebration of the Mass, and endless kindnesses to people he met. However, he referred to his review of Miscamble’s book in The Catholic Thing, in which he wrote of Hesburgh: “He was an ardent American assimilationist. He wanted America’s education, government, business, and cultural leaders to count him and his university as one of them. And in that he enjoyed considerable success.” As Hesburgh gained plaudits from liberals, Dempsey told LifeSiteNews, he was later crowned chairman of the pro-abortion Rockefeller Foundation and served on the federal Civil Rights Commission and the Harvard University Board of Overseers.

Dempsey agrees with Miscamble that Hesburgh’s outspoken views on civil rights and the war in Vietnam were at odds with his relative silence on abortion. “To speak on abortion,” Miscamble wrote, “would have put him at odds with so many of his friends in the American establishment[.] … It was not simply a concern about putting at risk the personal status and acceptance he had won; he represented Notre Dame, and his university was in the midst of striving to improve and to build its reputation as a modern American university.”

This striving bore fruit: Hesburgh boosted Notre Dame’s endowment from $9 million to $30 million in ten years. It now stands at $13.1 billion, having been endowed by nonprofits and corporations whose interests have conflicted with Catholic teachings.

While Hesburgh led the university in 1980, the late Joseph Buttigieg began teaching English at Notre Dame. He became a founding member and president of the International Gramsci Society, having translated and edited the three volumes of Antonio Gramsci’s ‘Prison Notebooks.” Gramsci was a philosopher who is considered one of the most important proponents of Marxism. Buttigieg’s son, Pete Buttigieg, is the homosexual mayor of South Bend, Indiana, and Democratic candidate for president.

Hesburgh’s legacy lives on in Fr. John Jenkins, who as president of Notre Dame served on the board of the international nonprofit Millennium Promise. Dempsey said that when he and the Sycamore Trust, which has frequently been at odds with the university, noted that Millennium Promise was involved in population control, Jenkins — like Hesburgh — insisted at first that he had not voted on those programs. Unlike Hesburgh, Jenkins would ultimately resign from the board.

Another example of Hesburgh’s legacy to Notre Dame was Jenkins’s announcement that murals depicting Christopher Columbus that line the corridors of the main building on campus would be removed.

In April, Jenkins announced his opposition to putting an internet filter in  place that would keep pornography from appearing on campus computers, writing, “We do not believe a mandatory filter is the best solution for us” but expressing his openness to students voluntarily adopting one.

In 2009, Fr. Jenkins conferred an honorary doctorate degree on then-president Barack Obama, despite the latter’s outspoken advocacy for abortion and the redefinition of marriage. The honor stirred considerable controversy among Notre Dame alumni and among faithful Catholics. A Catholic priest was among 19 pro-lifers who were arrested as they protested against Obama. Noted theologian Mary Ann Glendon had earlier declined the university’s Laetare medal because of the honor to be conferred on the president. Fr. Miscamble was also among those who opposed the honorary degree.