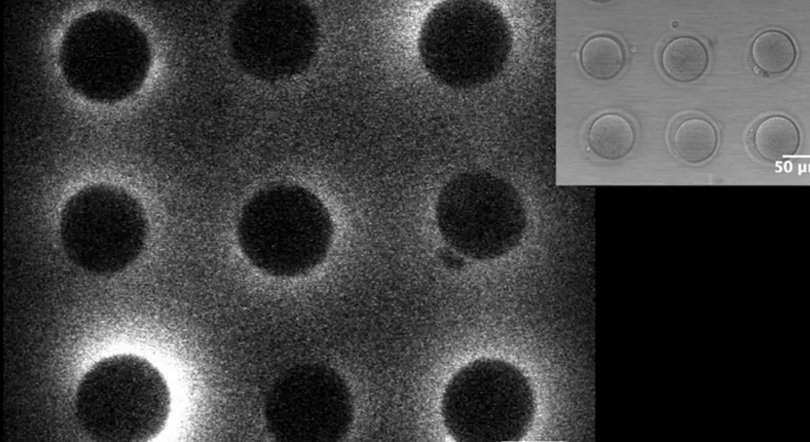 Researchers at Northwestern University have documented the striking event in a new video that accompanies a study published this week.

At the moment of conception, the egg releases massive amounts of zinc, which creates a spark that can be seen with the aid of a microscope.

“It was remarkable,” said Teresa Woodruff, a professor of obstetrics and gynecology at Northwestern University's medical school. “To see the zinc radiate out in a burst from each human egg was breathtaking.”

The research team had noted the zinc sparks before in mice eggs but had never observed the process in human beings.

“All of biology starts at the time of fertilization,” Woodruff said, “yet we know next to nothing about the events that occur in the human.”

One of the researchers, Northwestern chemistry professor Thomas O'Halloran, explained the science behind the process in 2014.

“The egg first has to stockpile zinc and then must release some of the zinc to successfully navigate maturation, fertilization and the start of embryogenesis,” he said. “On cue, at the time of fertilization, we see the egg release thousands of packages, each dumping a million zinc atoms, and then it's quiet.”

“Each egg has four or five of these periodic sparks,” O'Halloran said. “It is beautiful to see, orchestrated much like a symphony.”

Since the amount of zinc in an egg correlates with successful implantation and birth, the Northwestern researchers are highlighting that their research may be used to assist in vitro fertilization.

But that raises concerns given the grave moral issues with IVF, which involves creating numerous embryos that are either killed or frozen. Moral theologians also emphasize that IVF is an injustice even for the children who are born as a result, as they are created in a lab rather than in the union of man and woman.

The study may have far-reaching consequences the research team did not intend, such as strengthening public belief in the longstanding scientific consensus that life begins at the moment of conception/fertilization.

Many of those who saw the Northwestern video said it testifies to the beauty of life and the shallow lies that buttress the argument of abortion-on-demand.

“I saw this, and I was blown away by it,” said Rush Limbaugh on his nationally syndicated radio program Thursday afternoon. “For anybody in the mainstream media to openly admit that life begins at conception” defies arguments that an unborn child is only “tissue mass.”

Researchers released a separate video of the zinc spark taking place in a mammalian egg more than a year ago:

The paper, which is entitled “The Zinc Spark is an Inorganic Signature of Human Egg Activation,” was published by Scientific Reports on April 26.

Planned Parenthood: Women should ‘decide for themselves when life begins’
DNC chair: saying life begins at conception ‘extreme and radical’