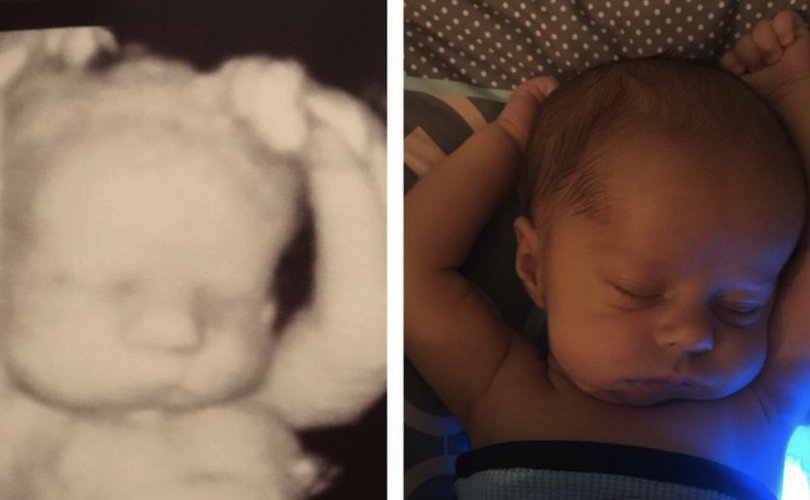 April 4, 2018 (LifeSiteNews) — Matching images of a South Carolina baby boy taken within weeks before and after birth show he continues to sleep in the same exact position as he did in the womb — capturing the baby boy’s personality while highlighting the humanity of the preborn.

Michael Steppling was caught in a laid-back pose with both arms up over his head when his mother, Sarah Kelleher Steppling, had an ultrasound at 38 weeks in her pregnancy with him.

Michael continued to sleep in the same position after he was born, and his easygoing demeanor emerged even more clearly after his mom had taken countless photos of him as he continually repeats the pose.

That prompted Kelleher Steppling to share on Reddit side-by-side images taken three weeks before and after her son’s birth, which were then picked up by other media.

“From day one, this kid knew how to relax,” she told Yahoo’s Lifestyle section. “He always slept with his hands up like that. If you were to go through my phone right now, you’d find probably about a million and a half images of him sleeping in that exact same position.”

“One day, I thought to go back and look at his ultrasound pictures,” she continued. “I saw that one and was like ‘OMG! He sleeps just like that now!’”

Michael also similarly reposes when he’s nursing, which Kelleher Steppling has captured and shared on Reddit as well.

“The reaction online has been overwhelmingly positive,” she said, “and that’s quite a tall order for Reddit!”

The photo-sharing site has a reputation that in part includes negative responses to what some users have shared.

Sharing photos of her son has also allowed her to connect her with other parents who have experienced some medical challenge in the first few months of their child’s life, in particular because of another certain photo.

“He had unexplained hemolytic anemia and severe prolonged jaundice for the first month of his life,” Kelleher Steppling said of Michael, “which is why he’s resting on that blue light in the (particular) picture.”

A number of the parents who saw the photo knew the light was for baby with jaundice — a liver condition causing yellowing of a newborn baby’s skin and eyes — because they had been through the same thing. They offered her their support and advice.

In Michael’s case, it meant doctor visits every one to two days for blood monitoring, plus a 48-hour hospital stay.

His mother reported that of course “he took it all like a champ.”

“Now he’s almost three months old and starting to wake up from his newborn phase and wants to play and interact,” Kelleher Steppling said. “We’ve been reading Kurt Vonnegut to him at night, and I swear, he gasps in all the right places.”

She said she looks forward to hearing Michael say “Mommy” for the first time, and that she and his father consider themselves to be very fortunate.

“Every time he smiles at me, my heart melts,” Sarah said. “He really is as laid-back as he looks in this picture.”