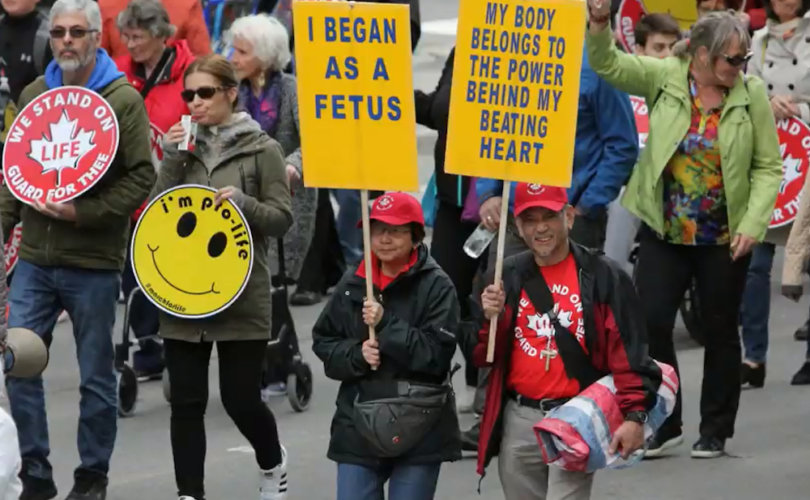 OTTAWA, May 1, 2019 (LifeSiteNews) — Abby Johnson of Unplanned fame and Ann McElhinney and Phelim McAleer, producers of the movie Gosnell – The Trial of America’s Biggest Serial Killer, are among the impressive roster of speakers for Canada’s May 9 national March for Life rally in Ottawa, Campaign Life Coalition announced Tuesday.

This year’s May 9 march commemorates 50 years since Prime Minister Pierre Elliot Trudeau’s Liberal government legalized abortion on May 14, 1969, and the four million children killed by abortion in Canada since that time.

Current Prime Minister Justin Trudeau has continued his father’s legacy with his abortion extremism, and Canada remains without any law restricting abortion.

The hour-long rally begins at 12:30 p.m. May 9 on Parliament Hill and will be followed by the March for Life through the streets of Canada’s capital. Campaign Life Coalition youth coordinator Marie-Claire Bissonnette and LifeSiteNews co-founder and editor-in-chief John-Henry Westen will emcee the rally.

Steve Karlen and Matt Britton of 40 Days for Life, a campaign of prayer and witness outside abortion centers that has saved thousands of babies and mothers from the violence of abortion, will also speak at the rally.

Other guests include Conservative Member of Parliament David Anderson, whose bill protecting the conscience rights of health care workers is expected to debated in Parliament on May 29; Archbishop Terrence Prendergast of Ottawa; Cardinal Thomas Collins of Toronto; Angelina Steenstra, Canadian coordinator for the Silent No More Awareness Campaign; and Shalyn McGuin of Save the 1.

Johnson’s well-known conversion from Planned Parenthood clinic manager to a pro-life advocate has been dramatized in the hit movie Unplanned, recently released across the United States to unexpected box office success, despite efforts to quash awareness of it on social media.

Unplanned’s unflinching depiction of the reality of abortion has led many Americans to rethink their “pro-choice” stance and has been described as a “call to action for the pro-life movement.”

Indeed, the movie’s release in March inspired American pro-life leaders to organize an evening of candlelight vigils outside some 140 Planned Parenthood abortion centers in 39 states on April 13. America’s largest abortion provider, Planned Parenthood commits more than 36 percent of all abortions in the United States every year.

The movie Gosnell, produced by husband-and-wife team McElhinney and McAleer, dramatizes the story of abortionist Kermit Gosnell, now serving a life sentence on three convictions of homicide and one of involuntary manslaughter in connection with the death of mother Karnamaya Mongar.

Gosnell killed hundreds of babies who survived abortion in his filthy Philadelphia abortion center by snipping their spinal cords with scissors, preserved the feet of some of his tiny victims in jars, and stored baby bodies in the clinic’s lunchroom fridge.

McElhinney and McAleer, who wrote a book on Gosnell and produced the movie, became opposed to abortion during their investigations of the notorious serial killer, whom they interviewed in jail.

“I had a profound sense of the presence of evil in the actions of Gosnell and his staff and their complete lack of conscience,” McElhinney told journalist Anita Crane in late 2018.

“I wept at my computer. I said the Our Father sitting at my desk. I am no holy roller – I hadn’t prayed in years – but at times when I was confronted with the worst of this story I didn’t know what else to do.”

The evidence at the Gosnell trial changed her life, McElhinney said.

“I am absolutely certain that the dead babies spoken of in court were unique people whom the world will never know,” she said. “I hope the movie and book go some way to mark the fact that they lived, and in their short lives they made a difference. This story can change hearts and minds. It changed mine.”

McElhinney and McAleer are also keynote speakers at the March for Life Rose Dinner.

“We are thrilled to have such an inspirational lineup of special guests whose efforts continue to save lives and change hearts around the world,” said Jeff Gunnarson, national president of Campaign Life Coalition in Tuesday’s press release.

“Together with some of Canada’s religious, pro-life and political leaders, including MP David Anderson, who will be joined by other parliamentarians on the Hill, our speakers will testify to the importance of protecting the right to life for all human beings,” said Gunnarson.

They will “inspire Canadians to join a movement that will bring an end to the 50 years of abortion on demand in Canada.”

The March will be followed by a concert on the Hill by the March for Life band, after which women and men of the Silent No More Awareness Campaign will give their testimonies.

Thursday’s program on the Hill ends at 4 p.m. with a prayer service led by the Eastern Catholic Chaplaincy of Ottawa.

A Wednesday night candlelight vigil at the Canadian Tribute to Human Rights Monument in Ottawa kicks off the three-day event, which concludes Friday with a youth conference.

Laura Klassen and Trent Horn will address the youth conference, and Steve Fitzhugh will speak at Thursday night’s youth banquet.

For more details on the March for Life, go to the website marchforlife.ca