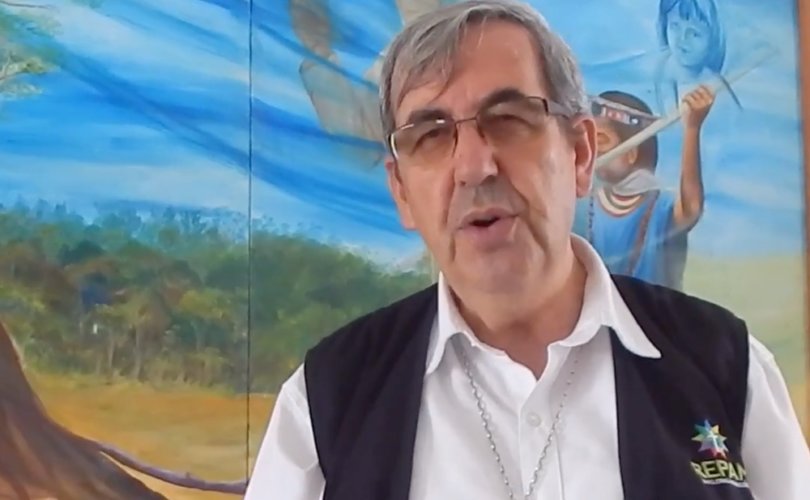 QUITO, Ecuador, September 17, 2019 (LifeSiteNews) ― An Ecuadorian archbishop has backed the ordination of married men from remote parts of the Amazon and has stated that women should be made “ordinary” ministers of the Eucharist.

Archbishop Rafael Cob, of the Diocese of Puyo, Ecuador, told a group of journalists, including Inés San Martín of Crux, that he wants to see the Catholic Church shift from a “clerical institution” to a “ministerial” one. This will permit the ordination of married viri probati, or “tested men,” from the Amazon region to the priesthood so that they can celebrate Mass in remote parts of the jungle.

Cob stated that the Church had had married priests “from the beginning” and that celibacy was not mandatory before the Council of Nicea in the fourth century. He characterized the decision as a matter of convenience for the Church and that this decision “didn’t mean that there were no other alternatives.”

However, this minimized the serious theological reasons that priests of the Early Church did not marry or did not have marital relations with their wives.

“To say that clerical celibacy is a matter of the Church's convenience, or merely a disciplinary matter, is misleading, since while the Church has on occasion allowed the ordination of married men, celibacy and continence are theologically connected with the inner nature of the priesthood, and have been throughout the history of the Church,” Dr. Joseph Shaw told LifeSiteNews.

A tutorial fellow in Philosophy at St. Benet’s Hall in Oxford University, Shaw pointed out via email that bishops, who have the fullness of the priesthood, must be celibate in both the Western and the Eastern Churches, with no exceptions, and that “this is in many ways very inconvenient.”

He also noted that married clerics in both the Eastern and Western Churches―whether priests or deacons―who are widowed are not allowed to remarry, and that, like the rule for bishops, this rule can be explained only theologically.

“Clerical celibacy is connected to the priesthood by the example of Christ,” Shaw stated.

“Christ's own celibacy, along with his masculinity, is the symbol of his role as bridegroom of the Church, and the priesthood is an extension of this role. To say that celibacy has no theological significance is tantamount to saying that masculinity has none: an attack on celibacy will lead inevitably to the proposal of women priests,” he continued.

Shaw recounted that In the early Church the discipline of celibacy and continence varied somewhat from place to place and over time, but was never regarded as a matter of mere convenience.

“St Paul's admonition that a presbyter be 'the husband of one wife' (1 Timothy 3:2) was understood to rule out those who remarried after the death of a first wife, and priests were selected from men whose children were grown up,” he said.

He explained that many of the Fathers of the Early Church clarified that while married men could be ordained while the wife was still living, ordination implied the cessation of marital relations: even for Fathers like St. Clement, who had a very positive view of sexuality, and long before the Council of Nicea.

“By the time of Origen of Alexandria [c.185 AD – c. 254 AD], the sexual continence (that is, abstinence) of even married clergy could be taken for granted,” Shaw continued.

“It is not surprising, therefore, that we read in the early centuries that the wives of ordinands had to give permission for their husbands' ordination, or that the children of clergy begotten after ordination were regarded as illegitimate.”

Archbishop Cob also suggested that Amazonian hopes for the ordination of married men was not meant to supplant celibacy as the norm but merely address a local circumstance. Apparently some remote communities in the Amazon see a Catholic priest only twice a year. However, it is likely that other regions who also suffer from a shortage of priests, such as Germany and other western countries where the Church has imploded and vocations are scarce, will also be tempted to advocate for married priests.

Dr. Shaw believes that undermining the celibacy of the Western Church today would be a “disastrous” move away from Christ’s example at a time when “the commitment of the clergy to the self-sacrificial union with and leadership of the spiritual community at a local level is most urgently needed.”

“In the context of a shortage of priests in Amazonia or elsewhere, it would further imply the ordination of men without the intellectual or spiritual formation urgently needed for priests if they are to minister effectively,” he added.

Shaw underscored that the priesthood is not just about being able to celebrate the sacraments.

“It implies the radical conformity to Christ necessary to guide and lead the faithful in the most difficult circumstances, including those of persecution,” he said.

“To suggest it can be added as a task to men with marital responsibilities, and perhaps a secular job as well, is an insult to the marital state itself, which requires complete commitment to the family.”

“Ministries such as that of the Eucharist or of the Word were seen as exclusively for men, but today you have women who are ‘extraordinary’ ministers of the Eucharist. Why not make them ordinary?”

Cob said that the Church must give women who perform what were once priestly functions “institutional support” through canon law. These women include not only extraordinary ministers of the Eucharist but also “parish administrators,” laypeople who run parishes to give priests more time to administer sacraments.

The journalists to whom Cob spoke were in Ecuador courtesy of REPAM, the Pan-Amazonian Ecclesial Network.  REPAM was founded in 2014 by the nine Churches of the Amazon region, including Bolivia, Brazil, Colombia, Ecuador, French Guyana, Guyana, Peru, Surinam, and Venezuela.

“Inspired by Pope Francis and backed by the Latin American Bishops’ Conference, CELAM,” the network aims to “bring to the world’s attention the fragile situation of indigenous people in the Amazon and the critical importance of the Amazon biome to the planet — our common home.”

1
WATCH: Pro-abortion protester’s voice becomes ‘demonic’ as he claims to ‘love killing babies’
2
Catholic priest openly challenges Pope Francis: Are you a Freemason?
3
Pope appoints jailed bishop’s canon lawyer to investigate priests who testified to abuse
4
Princess Gloria: Global elites think they do good but actually serve the ‘prince of the world’
5
While the Supreme Court should be praised for overturning Roe, it didn’t go far enough
Subscribe to Daily Headlines »